Justin Thomas overturned a record-equalling seven-shot deficit before beating Will Zalatoris in a play-off to win his second US PGA Championship following a dramatic climax at Southern Hills.

Chile’s Mito Pereira held a one-shot lead on the 72nd hole after seeing his birdie putt on the 17th stop agonisingly short of the hole, but pushed his drive into the creek and ran up a devastating double bogey.

That left Thomas and Zalatoris to contest a three-hole aggregate play-off and Thomas birdied the 13th and 17th and parred the 18th to lift the Wanamaker Trophy for the second time, having started the day seven shots off the lead.

That meant the former world No 1 equalled the biggest comeback in US PGA history: John Mahaffey coming from seven behind Tom Watson after 54 holes to defeat Watson and Jerry Pate in a play-off at Oakmont in 1978.

Thomas had holed from six feet on the par-five 13th to match the birdie Zalatoris had made after finding the green in two, but Zalatoris missed from eight feet for birdie on the 17th after Thomas had driven the green on the 302-yard par four to set up a two-putt birdie.

Zalatoris then could not hole his lengthy birdie putt on the 18th and Thomas safely two-putted for par to get his hands on the Wanamaker Trophy for the second time, after his 2017 win at Quail Hollow.

Thomas had birdied the 17th in regulation and missed from 10 feet for another on the last, his third 67 of the week setting a target of five under par that only Zalatoris was able to match, with Pereira and Cameron Young four under and England’s Matt Fitzpatrick and Tommy Fleetwood sharing fifth place on three under.

Fitzpatrick began the final round three behind Pereira and his chance looked to have disappeared as he followed a front nine of 36 with bogeys on the 10th and 11th, but the 27-year-old from Sheffield chipped in for birdie across the 15th green to revive his hopes.

However, Fitzpatrick pitched into a bunker to bogey the 17th and end his chances of becoming just the second English winner of the US PGA and first in 103 years.

“It’s a tough one to take right now,” Fitzpatrick said. “Just got to try to take the positives. The first three days I was immaculate. Everything I was doing was right.

“Maybe today wasn’t quite as switched on. I made too many mistakes on the simple things. I didn’t hit it in the fairway enough. There were just a few things today which I could have done better looking back.”

Rory McIlroy’s second successive Sunday charge in a major had earlier ended in disappointment as his wait for a fifth major title, and first since the 2014 US PGA, goes on.

McIlroy finished runner-up in the Masters thanks to a closing 64 at Augusta National, a round which culminated in wild celebrations from the four-time major winner after he holed a bunker shot on the 72nd hole.

In stark contrast, McIlroy’s closing 68 in Tulsa was followed by him declining to speak to waiting reporters before quickly collecting his belongings from the locker room and heading to his car.

The reaction was understandable given that McIlroy had enjoyed a one-shot lead following an opening 65 from what proved the favourable side of the draw.

A second round of 71 was far from disastrous, but Saturday’s 74 left him nine shots off the pace heading into the final round, a deficit he swiftly reduced thanks to four birdies in a row from the second.

The par threes have been McIlroy’s undoing however – the 33-year-old playing them in five over par in round three even with a birdie on the 14th – and the sixth cost him another shot on Sunday after missing the green and hitting a poor chip to 20 feet.

Good birdie chances went begging on the ninth, 12th and 13th and McIlroy’s faint hopes were ended with a bogey on the short par-four 17th.

Fleetwood had set the early clubhouse target after five birdies in six holes from the 12th gave him a closing 67, but said he had not contemplated his total being good enough to win or get into a play-off.

“I’m going to be happy wherever I finish,” Fleetwood said. “I’ve never thought it was enough but it was great to have what’s going to be my best result of the year so far in a major.” 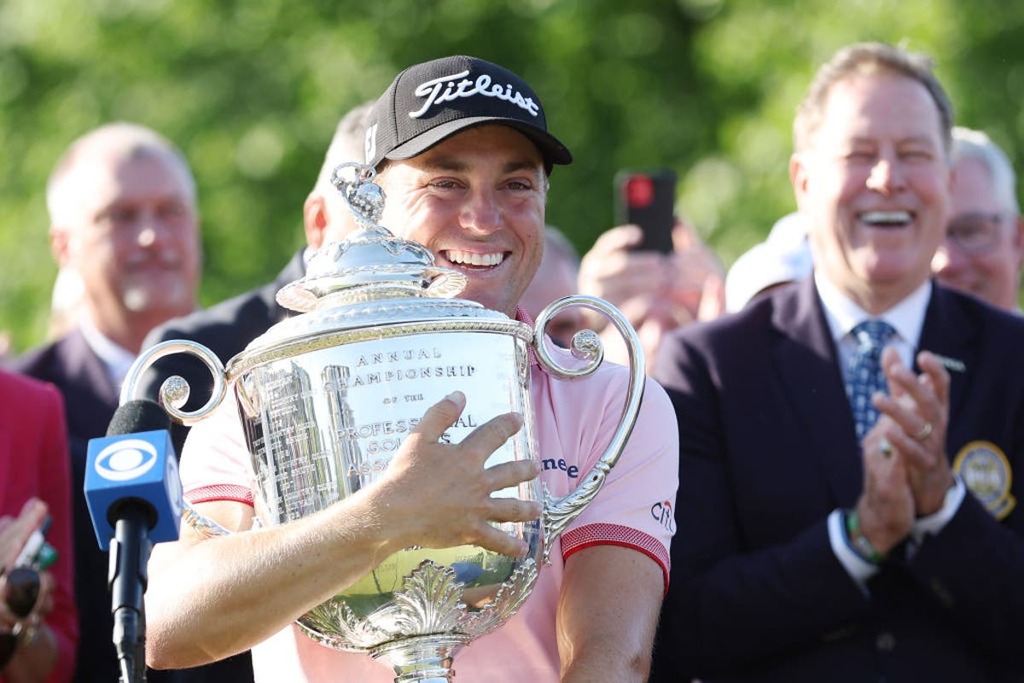 PGA Championship 2022 LIVE: Leaderboard & reaction as Justin Thomas beats Will Zalatoris in playoff
All the action from the final day at Southern Hills as Mito Pereira takes a three-shot lead into round four