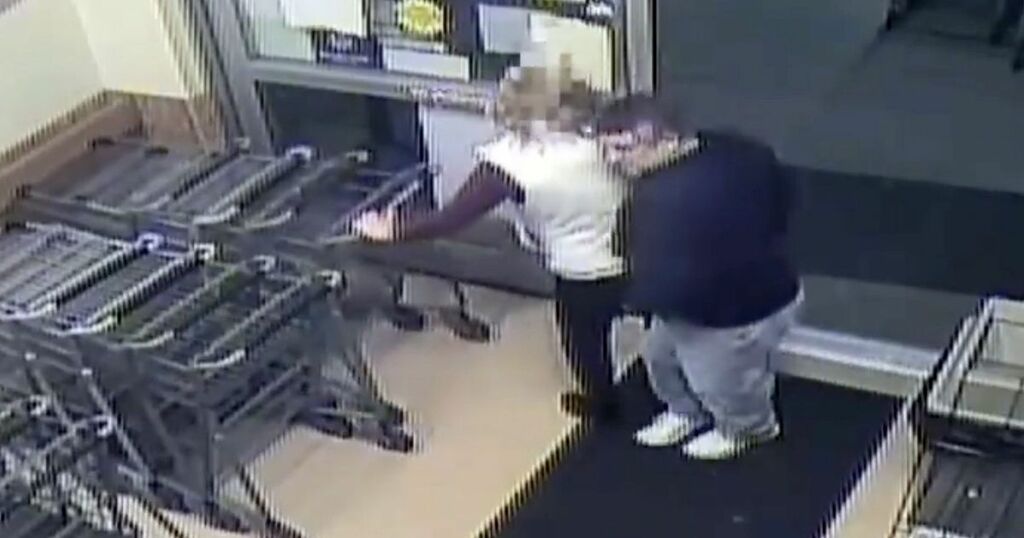 A pervert who stabbed a woman with a syringe filled with his own semen has been jailed for 10 years.

Mrs Peters was returning her shopping cart when he jabbed her in the buttocks on February 18 last year.

CCTV footage - later seen by police - shows her carrying the cart as Stemen pokes her with a syringe from behind.

When the victim turns around after being attacked, she can be seen looking at the floor to try and understand what happened.

Stemen, wearing a pair of jeans and a blue sweater, also looks at the floor and reportedly told her: "I know it feels like a bee sting, doesn't it?"

He then keeps following Mrs Peters and leaves the store just after she gets out.

The pervert was charged with assault after police were shown the footage, Anne Arundel County Police said.

The victim said she confronted Stemen after the attack.

After confronting Stemen, Mrs Peters got into her car to go home, but called her son when she started to feel a burning sensation and found a puncture wound on herself.

She said: "I started driving home (and) it started hurting really bad.

"I called my son and said, 'Something's not right, I hope nothing happens. I hope I make it home, I love you'."

Police say they found a large syringe filled with liquid in Stemen's car during a search, as well as more syringes in his home, local news station WJLA reports.

The prosecutor said Peters lived down the street from Stemen and that he had come into contact with two other people but did not successfully inject them, CBS Baltimore reports.

Stemen also served a warrant in 1999 as a fugitive from justice, according to Maryland online court records.

The records also show he went to court in 2013 for a domestic violence civil suit, Mail Online reports.

Stemen pleaded guilty to last year's supermarket assault through an Alford plea, which is a guilty plea where a criminal maintains their innocence, CBS reports.