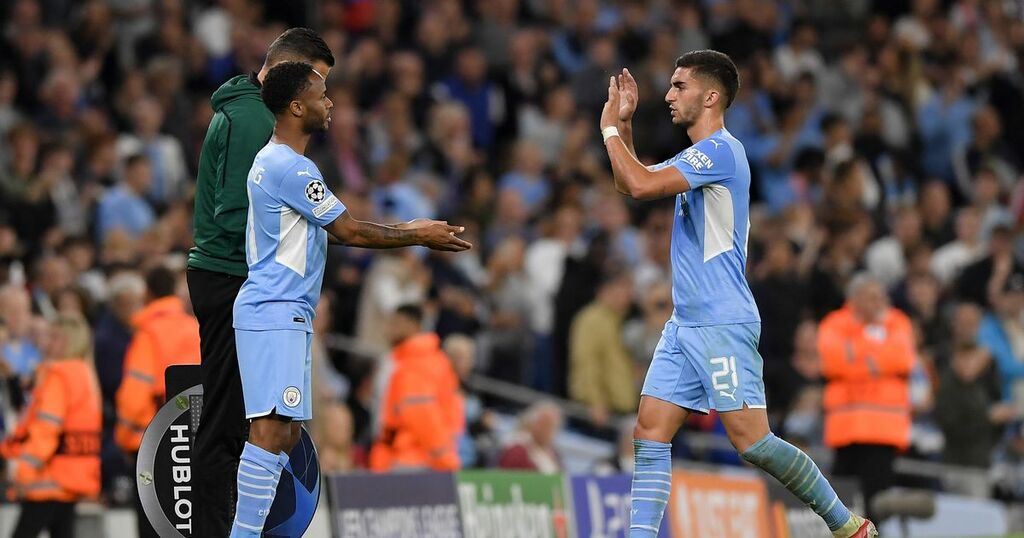 Pep Guardiola has had to adapt this season after not getting the striker he wanted in the summer transfer window.

Manchester City went into the market with confidence that they would land an excellent successor to Sergio Aguero but came up emptyhanded after spending most of their time on a fruitless pursuit of Tottenham striker Harry Kane, leaving the manager to make do with his current squad.

The opening ten games of the campaign have seen City employ a range of different options in attack. Ferran Torres started as the makeshift No.9, Raheem Sterling has also taken up the role while on a number of occasions the team have played with a false nine - as they did successfully on their run to the Champions League final last season.

Selection decisions are affected by the form of the players, but over the course of a number of press conferences Guardiola has also given an idea as to how and when he will use the different options he has up front.

Sterling is a peculiar case and has been for most of his time at the club.

Guardiola, as famously shown on the Amazon documentary in the 2017/18 campaign, has strong reservations that he would make it as a finisher but was so amazed by his subsequent development that by the middle of 2019 he thought the player could convert to become a central striker. As teams sat further and further back against the two-time champions though, the manager felt that Sterling was better off on the left wing where he could ghost into space rather than being heavily man-marked in the middle.

Phil Foden and Jack Grealish have since ousted him from the left, but there was a suggestion from Guardiola after using him centrally against PSG that Grealish could help his chances of game time in the middle.

"He can play there [on the right] but at the start of the season Gabby played really good there. [As a striker], especially with guys with one-on-ones like Jack and Riyad who can attract more opponents and PSG players to create the spaces in the other areas and we need a guy who runs in behind right to left, Raheem is the best we have in the squad.

"It depends sometimes on the opponents and the way we want to attack and specific players we need, we sometimes need specific qualities for that."

The fact that he was picked there against quality opposition - even if it was the least important of the three that week - bodes well for future opportunities.

You can tell how much Guardiola rates Torres as a striker in how often he has spoken about the player's sense or smell of goal - the sign of a true marksman.

The nature of the Spaniard's hat-trick got the manager really thinking over what his best position was, and while a striker was still sought in the transfer window Torres was the obvious alternative when none arrived - particularly with Gabriel Jesus preferring to play on the right wing.

And while he would later play down comparisons as a whole, the City boss also likened the movement of Torres to another striker he raves about in Jamie Vardy after another star turn against Norwich in August.

"Ferran has a big sense for the goal," he said after the Norwich game, "a little bit higher than Gabriel when he plays in central positions. The movements are more to the ball. Gabriel comes more to associate and drop a little bit, Ferran makes movements more to the goal and with our lack of goals lately we need a guy to make movements there.

"Ferran made incredible movements against Spurs and he did it again. That's why I'm more than pleased."

Torres may have been unfortunate to sit out the last three games, but given he is the most convincing option as an orthodox striker upcoming fixtures against Burnley, Brugge, Brighton, West Ham and Palace offer more opportunities for minutes.

Phil Foden, Jack Grealish and Kevin De Bruyne are among the players to have occupied the central forward positions in games this season without being considered as centre-forwards. As with when Jesus does that role, it is probably more accurate to call them the first presser in the team.

Guardiola opted to play without Torres or Sterling in the league games without Chelsea and Liverpool recently, and if an argument can be made that a top striker would have ensured better scorelines in those matches the counter is that the team could not control the game as they did without so many midfielders-cum-forwards in the side.

For the manager, it is more worrying when they do not create chances than when they do not finish them - as happened against Southampton. And when things work as well as they did at Stamford Bridge, questions about a No.9 tend to go away.

“Sometimes we believe we need a proper striker to finish. But the important thing is the way we play,” he said after the Chelsea game. “The most important thing is doing it as a team and as a unit. It’s like last season. Sergio was injured all year and we won the Premier League.”