By Anna Kelsey-Sugg for The History Listen 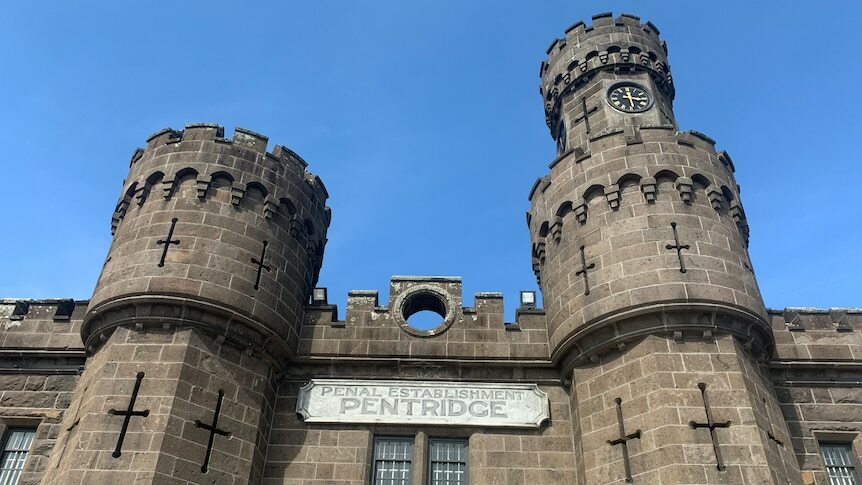 Barry York remembers laying on the bed in his tiny cell at Melbourne's Pentridge prison and hearing prisoners being beaten by guards.

"You would hear the thuds, the kicks, the screams; men screaming out 'stop'," he tells ABC RN's The History Listen.

It would take another 25 years before the nearly 150-year-old prison was finally closed, after mounting criticism of the conditions inside.

"The remand exercise yards were filthy … there were open toilets up the back, and people would just walk up and down pointlessly," Mr York says.

Only five years earlier, on 3 February 1967, 41-year-old Ronald Ryan had been hanged at Pentridge after being found guilty of killing a prison warder.

Mr York would walk past the gallows on his way to the exercise yards.

"Ryan had been hung at that very spot and I remember looking up and seeing the beam and just feeling terrible," he says.

For Mr York, who spent six weeks incarcerated at Pentridge, the prison was "an introduction to [a] lack of humanity".

Its history of brutality, that begins in 1851 and extends well into the 20th century, retreated into the past when it was finally shut down in 1997.

But a new problem emerged: what to do with the place?

It's a question that is still dividing the community.

Years of isolation, violence and executions

In the mid-19th century, Victoria's goldrush population was booming and crime along with it. Old Melbourne Gaol was filling up, so, less than 10 kilometres from the city in Melbourne's north, Pentridge prison was established in 1851.

The first inmates built their own prison walls with local bluestone. For around 50 years, men and women were known by a number, not their name, and they spent 23 hours of every day in solitary confinement.

There are stories of prisoners locked in cages, chained in irons, fed just bread and water and marched to cells wearing hoods, with only slits for the eyes.

Archaic punishments continued at Pentridge from the 19th century well into the 20th.

On 19 February 1951, 31-year-old Jean Lee was executed at Pentridge, the last woman to be hanged in Australia. Ronald Ryan's 1967 hanging would be the last in Australia.

In 1958, William John O'Meally became the last to endure a cat-o-nine tails flogging. He suffered 12 lashes as punishment for trying to escape.

By the early 1970s, prisoner rebellions were bringing attention to the conditions of life inside Pentridge. On the outside, activist groups like Prisoners Action Committee and Women Against Prison were doing the same, organising protests and vigils outside the prison walls.

In 1986, when Mark 'Chopper' Read got out of Pentridge after nine years inside, he described the prison as a "madhouse".

"It breeds psychopaths," he told an ABC TV reporter.

When the state-owned Pentridge finally closed in 1997, after mounting public pressure and as part of a movement towards privatising prisons, the Victorian government decommissioned the prison and sold the site to private owners.

In the years since, redevelopers have built cafes, restaurants, a playground, a supermarket and multi-storey apartment buildings on the site.

In what was the prison's muster yard, children can run free while their parents watch on enjoying a coffee or gelato.

Not far from the gallows where ten people were once executed, there's a new Pentridge cinema and an upmarket wine cellar.

And if you're there at night, you might catch excited groups taking a ghost tour through the old cells in Pentridge's D Division.

It doesn't sit well with Wurundjeri woman Jane Bennett, who worked as a social worker at Pentridge in the 1980s.

"I don't believe it's respectful for these areas to be playgrounds," says Ms Bennett, who also disapproves of the residential development on site.

"It's Aboriginal land and I also think it's the land of people of non-Aboriginal descent who lost their souls there," she says.

In his book Pentridge: Voices from the Other Side, author Rupert Mann writes that there were 75 deaths at Pentridge prison between 1973 and 1997 — of which only 13 were from natural causes.

In 1956, after lobbying spearheaded by welfare worker Dame Phyllis Frost, women had been moved out of Pentridge into a new women's prison, Fairlea. But in 1982 when a fire broke out there, women were temporarily moved back to Pentridge.

It led to the first recorded female suicide in prison and, in the five-year period in which women remained at Pentridge, four other women also suicided.

How to hold bad memories

Graeme Alford spent six years in Pentridge in the late 1970s and early 80s. He credits his time inside with getting sober and turning his life around. But it wasn't an easy time.

From 5pm until 7am the following day, Mr Alford would be locked in his cell. He says if prisoners behaved well – for instance, hadn't spoken up to a guard or been late for muster – they'd be permitted limited family contact.

In his third and final stint in Pentridge, that proved particularly tough.

"My mother was very sick and so you could spend two weeks not knowing how she was."

Despite the difficulties he faced at Pentridge, Mr Alford's not opposed to the idea of people enjoying the re-purposed Pentridge space.

In fact, he once made headlines for buying back his old cell, when it was turned into a wine cellar.

He quickly sold it back, however, conceding it was a bit incongruous for someone who does so much work to help people with drug and alcohol addiction.

And he says he could never live in the apartments on-site. "It'd bring back memories I don't need," he says.

But as for the redeveloping the old prison space, Mr Alford is all for it.

Both Ms Bennett and Mr York argue that while redevelopment continues to occur, a museum on site would help respect and preserve the site's history.

The National Trust has said a visitor centre will be opened at Pentridge in Spring 2022, but just what that centre will be, including its configuration and design, have yet to be decided on.

Acknowledging the good and bad

Ms Bennett says good and bad co-existed at Pentridge. She wants both to be acknowledged and understood today.

"It was a pretty dark culture, it could be quite frightening at times and, at the same time, I think a lot of staff were doing their best to make it safe, a little bit less frightening," she says.

Ms Bennett remembers feeling nervous when a new inmate, a transgender woman, arrived at her male unit. But she says staff and other prisoners worked hard to make sure she was safe.

"We had a very caring chief prison officer. He was incredibly good at his job, incredibly kind. And so what we did was we organised separate shower times and a separate cell.

"I was quite worried about it [but] from what I could gather, and I spent a lot of time with her, she felt at home, she felt quite safe. And a lot of effort went into that. She kept her pride. She held her head high."

And while Ms Bennett says there was significant racism among staff inside Pentridge, there were also "people that were doing their utmost to protect Aboriginal people".

"I would advocate but so would other people," she says.

Ms Bennett says prisoners were quick to pick up on racist attitudes, even the covert ones, among staff.

"People forget, these [Indigenous inmates] survived stuff we couldn't survive. They're smart, they're streetwise, they're strong. And they're intelligent. They're not dumb," she says.

Today, she wants the public to remember those who survived – and those who didn't survive – life at Pentridge prison.

"There were some unique characters there that would find the smallest things to give them joy … and I feel they need honouring, those characters," she says.

"It wasn't a very kind place. It was cold. It was tough. It was bloody. It was cruel. Yet there was a lot of kindness there.

"Don't ever let that be forgotten, it's a beautiful thing. Don't let that die."

Your information is being handled in accordance with the ABC Privacy Collection Statement.