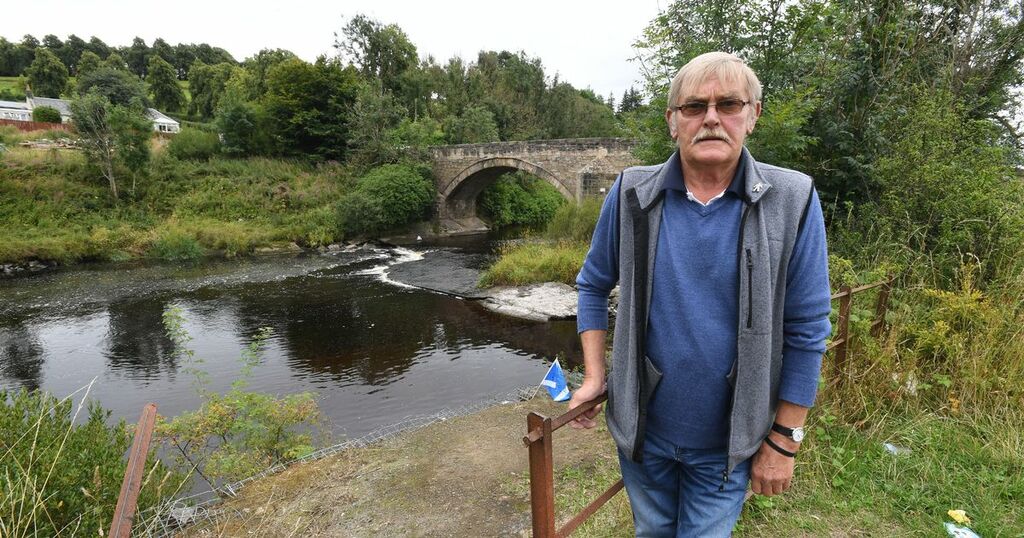 Calls to safeguard the area where tragic schoolboy Dean Irvine died are being made by a local campaigner.

Pensioner Danny Baxter has watched three people die in the water at Alexander Hamilton Memorial Park in Stonehouse over his lifetime and is determined he can force change in order to prevent further fatalities.

It comes after 11-year-old Dean lost his life after getting into difficulty in the river beside the Linthaugh Bridge.

And Danny, 71, claims the very same bridge is “structurally vulnerable”, and is a huge cause of dangerous currents in the water beneath.

Parts of land close to the river bed have been eroded over the years due to the change in the river. And South Lanarkshire Council is currently undertaking a woodland management plan of the area.

However, the local authority says it has not identified any repair works required at Linthaugh Bridge.

Now, Danny is pleading with the authorities to make the Stonehouse beauty spot a much safer place.

“If a child goes through that area and slips it could be fatal," Danny told Lanarkshire Live.

“The bridge is needing a structural survey to find out what’s happening, the foundations where it’s sitting, the shelves go right underneath, and we don't know how much is being eaten away.

“You might get my lifetime out of the bridge but eventually it will go. It’s structurally vulnerable. It’s needing surveyors and engineers out to find a solution to fill that hole in and block that channel off underneath, it’s eating the concrete away.

The three drownings Danny refers to go back as far as 40 years, and in the most recent tragedy, experienced divers were involved in recovering Dean's body. But the search operation still took hours – a measure of how dangerous parts of the water beside Alexander Hamilton Memorial Park are.

It's believed that due to eroded land some of the drops underwater at the bridge are as steep as 37 feet.

Danny continued: “Water is an attraction to kids but that area is too dangerous for them. It’s a dangerous river and it changes every year.

“It is a very dangerous place. That’s three drownings I’ve seen here in my lifetime and I don’t want to see another.

“One death was 40 years ago, when a boy fell in, then a youth worker also drowned about 25 years ago.

“It’s three drownings too many as far as I’m concerned.”

Also on board with the campaign to make the area safer is community organisation Friends of Stonehouse Park.

The group support further action to safeguard the Memorial Park with measures such as life aids.

Karen Kelly from the group told us they are willing to work with South Lanarkshire Council for such things to be introduced.

She said: “To make it safer, some signs being put up would be good to show the dangers of the water. Possibly a life aid been put in place and to have these things in place."

And this is something the local authority are looking to bring into play.

A spokesperson for South Lanarkshire Council said: “Our thoughts are with all those affected by the terrible accident that occurred in the river close to the Alexander Hamilton Memorial Park in Stonehouse.

“We are currently undertaking a woodland management plan in this area, including any signage that could be put in place warning of the potential dangers present around every free-flowing water course.

“Our schools, along with staff from South Lanarkshire Leisure and Culture carry out significant work on water awareness, their dangers and the safety measures that everyone should bear in mind while out and about near any body of water.

“The council is responsible for approximately 750 structures in South Lanarkshire. These are regularly inspected in line with our ongoing maintenance programme.

"No works were identified at Linthaugh Bridge from its most recent inspection.”