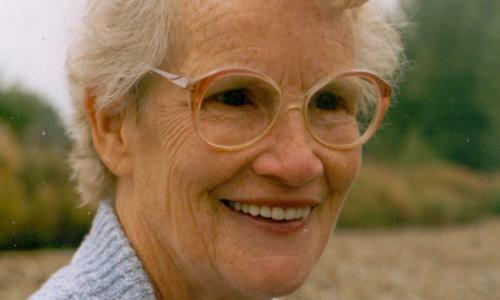 My mother, Margaret Lynch, known to all as Peggie, who has died aged 97, lived a full life in Liverpool, raising her own six children alone after being widowed at the age of 36, and fostering dozens of babies.

She was was born in Liverpool to John Gibbons, a brewery bookkeeper, and Anne (nee O’Sullivan), the third of seven children. Living in Fontenoy Street was noisy and dusty as the nine-year Birkenhead Tunnel construction effort started close by in 1925. She remembered as a young girl watching King George V and Queen Mary opening the tunnel in 1934. The house made a good viewing point. It was later demolished to make way for the Blackburn Assurance building.

Peggie was educated by the nuns at Notre Dame high school in Mount Pleasant. She was a good student and her school certificate at age 16 was all merits and distinctions. Her desire to be a teacher was quashed, though, because of her father’s long-standing bronchial condition; he died in 1940. Peggie had a succession of jobs, working for an agricultural food supplier, then at City Caterers, which supplied canteens along the Liverpool docks.

In the early 1930s, the family moved to Mill Road in Everton. During the second world war Peggie saw the blitz bombing of Mill Rd hospital, with new mothers escaping from the burning building dressed in their nightclothes, carrying their babies. During the war she worked making radios and other electrical equipment at the Automatic Telephone and Electric company.

In 1947, Peggie married Michael Lynch, a docker, whom she met at a dance, and soon they had four children. They moved into a council house in the suburb of West Derby; two more children followed.

In 1960 Michael was killed in an accident at work, crushed by the crane he was operating in a railway goods yard. Peggy was 36 years old with six children between one and 10. She resisted an offer of putting any of her children into care, and soldiered on with her family’s support.

When the children were all of school age she went to work at Littlewoods mail order catalogues for a few years, but then decided to become a full-time foster parent. She fostered 36 very young babies over a period of just a few years, when in her forties. They were mostly the babies of young Catholic mothers who could not look after them. After that Peggie spent several years working at Alder Hey hospital, working at the out-patients’ reception desk and in the records section. She retired in 1983.

Peggie enjoyed Scrabble and crosswords – she loved to do the Guardian cryptic crossword, especially puzzles set by Paul and Araucaria, and by Azed in the Observer. Her gardens were the most colourful in the street. She was an avid supporter of Everton football club all her life. She was sociable and well known in her neighbourhood, including at her local Tesco, with her trademark black peaked hat. She was always resourceful: in her 80s she managed to fashion a replacement fan belt for her spin drier from an elastic seat support in an easy chair.

She lived independently until the age of 94 and spent her last three years in a nursing home.

Peggie is survived by her six children, Peter, Ann, Kate, Mike, Joanna and me, by 12 grandchildren and five great-grandchildren, and by her sister, Miriam.