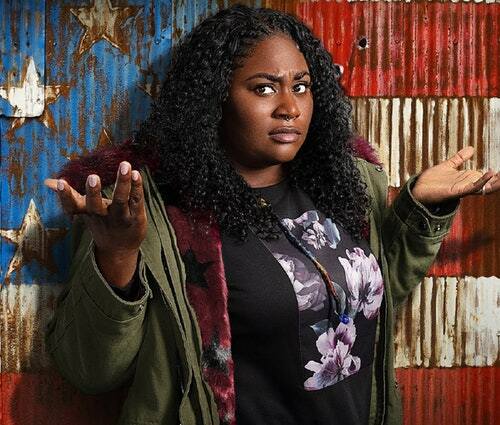 John Cena’s anti-hero might be the star of Peacemaker, but one other character steals the show (and no, it’s not Eagly.) Danielle Brooks’ turn as Leota Adebayo is one of the highlights of The Suicide Squad spinoff series, which just premiered its first three episodes on HBO Max.

Written and directed by James Gunn, Peacemaker follows the exploits of its titular hero, now that he survived the latest Suicide Squad mission and no longer has to serve time in prison. However, that doesn’t mean he’s free from Task Force X’s director Amanda Waller’s influence. To keep his freedom, he’s tasked with a new mission called Project Butterfly, which calls for Leota Adebayo to enter the picture.

WHAT’S YOUR FAVORITE SCI-FI MOVIE? Tell us now for a chance to get paid to write an article for Inverse.

But Adebayo isn’t just any fresh, young recruit. In fact, as Episode 1 reveals, she’s connected to Amanda Waller in a very unexpected way. Here’s what you need to know about Adebayo and how Peacemaker is changing Waller’s comic book history.

Spoilers ahead for Peacemaker Episode 1.

Who is Leota Adebayo in Peacemaker?

Leota Adebayo is an entirely new character in the DC Extended Universe. Created by James Gunn, Adebayo has no origins in DC Comics and is a complete mystery to fans and viewers. When we first meet her in Episode 1, Adebayo and her partner (and their adorable pups) just moved into a town where she is assigned to work on Project Butterfly.

Compared to the Peacemaker team’s veteran members, Adebayo is a fresh face who doesn’t feel the cynicism or disappointment of being assigned a mission alongside the arguably intolerable hero. She’s the first one on the team to strike some camaraderie with Peacemaker. However, as alluded in her conversations with her partner, this job seems like a one-time thing she hopes to move on from once completed.

That would seem simple enough. However, at the end of Episode 1, Adebayo is seen video-chatting with Amanda Waller, proving that Waller has a trick up her sleeve for Project Butterfly. Adebayo asks if she can loop the team in on Waller’s plan, but Waller adamantly says no. And that’s not all — before signing off, Waller affectionately wishes a good night to Adebayo, who responds and refers to Waller as “mom.”

Peacemaker revealing that Amanda Waller has a daughter is not too shocking, as Waller’s comic book history mentions she has children. What’s different with the HBO Max series is that Leota Adebayo is her daughter, a character who never existed in DC Comics.

There are many iterations of Waller’s backstory in the comic books, and a few of them involve a tragedy in which her husband and children are murdered. One of Waller’s stories even includes her having a daughter with the ability to turn into an insectoid-like creature. All of which to say, Peacemaker seems to be rewriting Waller’s origins, and the fact that her daughter is still alive, seemingly not an insect, and is Adebayo means that the DCEU’s version of the character might not have the same tragic history as in the comics.

The Inverse Analysis — While Adebayo effectively changes Waller’s comic book history, it’s her relationship with her mom that delivers Peacemaker’s first big twist. In many ways, Adebayo operates like an audience surrogate; she’s who the viewer can relate to the most. And yet, she has this big secret and is in cahoots with one of DC’s most ruthless characters.

It makes us question Adebayo’s true motives and allegiances. We have no idea what she’s capable of, especially after Waller praises her natural talent for this kind of work. The more Adebayo’s team seems to underestimate her, the more we wonder what will happen when she proves them wrong.