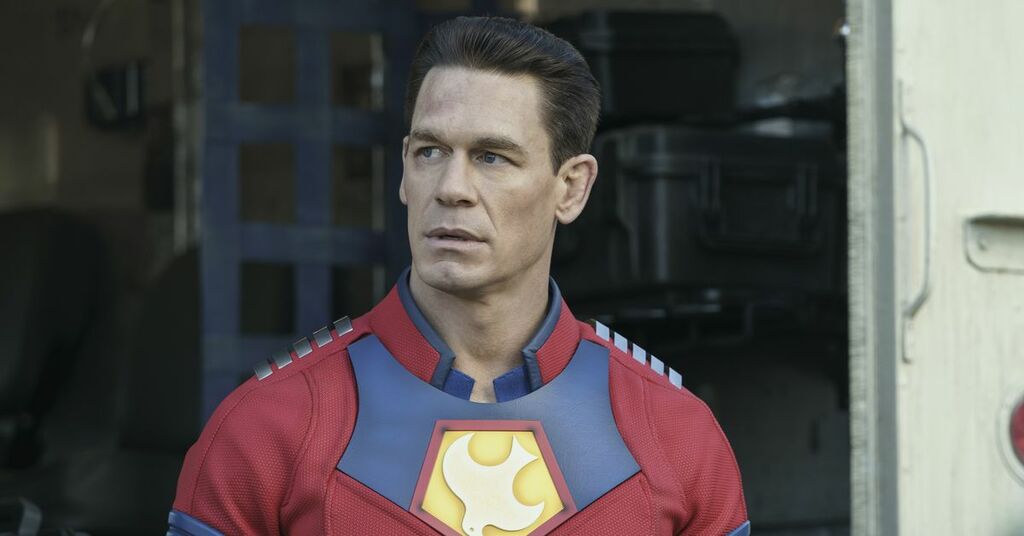 We already know from last year’s “Suicide Squad” movie that John Cena’s Christopher Smith aka Peacemaker is among the dumbest and most brutish entities in the superhero universe, given his slogan is: “I cherish peace with all of my heart. I don’t care how many men, women and children I kill to get it.”

Peacemaker is also a politically incorrect, misogynistic, wildly inappropriate, socially tone-deaf, ignorant lunkhead — but in the care of “Suicide Squad” and “Guardians of the Galaxy” writer-director James Gunn, the HBO Max spinoff series placing Peacemaker front and center works because the titular character’s boneheaded and often misguided but sincerely felt words and deeds make for the primary running joke in this wacky and subversive comedy/action romp.

Consider the moment when Peacemaker is shown a photo of a senator, his wife and their two children — and told his assignment is to assassinate the entire family, because they’re not actually human, they’re something … quite different and dangerous. But Peacemaker’s new supervisor says he doesn’t trust Peacemaker enough to reveal any further information, so Peacemaker exclaims: “So what is it, ‘Just trust us and shoot kids’! Come on man, look how adorable that one [kid] is. The other one, not so much. He’s got a ‘Children of the Corn’ vibe going on. Are you sure those two kids came out of those parents? That’s an attractive couple …”

That’s some twisted and funny stuff right there.

Of course, it helps to have as your lead the chiseled and amiable former pro wrestler Cena, who has an admirable one-two punch of action skills and comedic timing — and is the perfect foil for meta humor, e.g., when Peacemaker opines that climate change isn’t real and a colleague retorts, “Why do all the people who think pro wrestling is real think climate change is a hoax?”

The deadpan lunacy tone of “Peacemaker” is set with the opening credits, where Cena and the ensemble cast, in character, perform a hilariously stiff choreographed dance number to the sounds of the bombastic glam-rock anthem “Do You Wanna Taste It?” by Wig Wam. (Writer-director Gunn is a master at pop/rock needle drops; a running joke in this series is Peacemaker’s love of glam metal bands from the 1980s such as Cinderella.)

In the pilot episode, we pick up the story just after the events of “The Suicide Squad,” with Smith/Peacemaker miraculously recovering from his injuries after having killed Rick Flag during the Task Force X’s mission in Corto Maltese. Upon his release, Peacemaker is offered another “Dirty Dozen” type of deal: He can avoid prison by joining a task force helmed by Clemson Murn (Chukwudi Iwuji), and you can be sure the ensuing mission will involve Peacemaker getting into all sorts of comedically violent scrapes and we’ll eventually see guts spilling and heads exploding.

Peacemaker’s new colleagues include the obligatory snarky tech nerd John Economos (Steve Agee); the gorgeous, no-nonsense and quite lethal Emilia Harcourt (Jennifer Holland), and the eager and inexperienced Leota Adebayo (Danielle Brooks). He also has to contend with the irritatingly chipper Vigilante aka Adrian Chase (Freddie Stroma), who is kind of like a Dimwit Deadpool and is dying to be Peacemaker’s BFF, and Peacemaker’s father Augie (the always formidable Robert Patrick), a white supremacist who is so hateful and has been so awful to Peacemaker we begin to feel empathy for the big guy. It’s clear Peacemaker’s bravado stems from his deep-rooted insecurity and his aching need to be loved. (He’s still a jerk, but there’s hope for him.)

Brimming with references to D.C. characters such as Harley Quinn and Aquaman and brutally frank jokes about real-world figures such as Louis C.K., “Peacemaker” is a James Gunn creation through and through, with Gunn flexing his pop culture muscles and spilling blood, guts and irreverent humor all over the screen. There are times when the jokes seem stuck on repeat mode, but Cena and the terrific ensemble cast are real gamers who sink their teeth into the often absurd material, and we’re happy to ride along with them in their ridiculous undercover van that looks exactly like an undercover van.