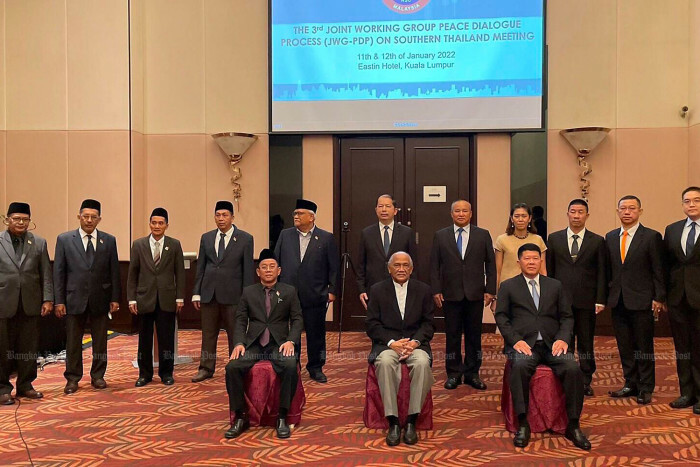 The Thai peace dialogue panel and a southern separatist group have agreed on a three-point framework as a basis for further rounds of peace talks, according to deputy government spokeswoman Rachada Dhnadirek.

She said the Thai delegation led by Gen Wanlop Rugsanaoh and representatives of the Barisan Revolusi Nasional (BRN) led by Anas Abdulrahman met in the Malaysian capital of Kuala Lumpur on Tuesday and Wednesday and agreed that the framework would serve as the basis for future negotiations.

The face-to-face meeting, the third official round of dialogue, took place almost two years after the previous round in March 2020. It was attended by Malaysian facilitator Abdul Rahim Noor and two specialists as observers.

Ms Rachada said the framework involves violence reduction, public participation and political solutions and that three joint working groups, one for each area, would be appointed to support the peace process.

She said Prime Minister and Defence Minister Prayut Chan-o-cha is satisfied with the outcome of the two-day meeting and has thanked all concerned parties for facilitating this much-needed step toward resolving conflict and restoring peace in the deep South.

Meanwhile, a source close to the meeting said the proposed safety zone was not discussed in the latest meeting, but the issue would be addressed by the joint working group on scaling back violence.

"Reducing violence is as crucial to the peace process as pushing for a ceasefire and reducing combat troops. But the deep South isn't a battlefield. It is a sensitive area that needs a special solution," said the source.

According to the source, there were no "military leaders" among the BRN representatives attending the two-day meeting.

The source said the joint working groups to be formed are hoped to facilitate dialogue after it has stalled for almost two years due to the pandemic. The source said the Thai delegation plans to invite the Malaysian facilitator for an informal talk in Thailand once the outbreak eases. Gen Wanlop, former secretary-general of the National Security Council, will hold a press conference on the meeting today in Phuket following his return from Malaysia, according to the source.

The latest round of peace talks came following an increase in southern violence including multiple bomb explosions in Yala on Dec 31. According to Yala police, the BRN claimed responsibility.

Since the insurgency reignited in 2004, more than 7,000 people have been killed and 13,500 others injured in violence across the deep South including Narathiwat, Pattani and Yala, according to Deep South Watch, a local think-tank.