The Kansas City Chiefs are Super Bowl champions after a wild comeback saw them overcome the San Francisco 49ers in a thriller in Miami.

Quarterback Patrick Mahomes and running back Damien Williams dragged the Chiefs back from a seemingly insurmountable 10-point deficit with less than nine minutes left in the game to eventually prevail 31-20.

KC, who end a 50-year drought without the Vince Lombardi trophy, win a second title and leave San Francisco and their coach Kyle Shanahan facing another heartbreaking loss in the big game.

MVP Mahomes, who had starred in the postseason, threw two interceptions but delivered when it mattered most throwing TDs to Travis Kelce and Williams in the fourth quarter to take the lead.

Scores from Kyle Juszcyk before the break and Raheem Mostert after appeared to have put the Niners on course for a record-equalling sixth title and left the Chiefs in a 20-10 hole.

But then Mahomes threw deep to a wide open Tyreek Hill for 44 yards. Kansas City then scored a touchdown four plays later, and quickly forced a punt.

Mahomes then conjured more magic to hit Sammy Watkins for 38 yards to set up a 5-yard scoring reception by Williams that put his team ahead 24-20 with 2:44 to go.

The 49ers then reached midfield as they bid for a miracle, but Jimmy Garoppolo was sacked by Frank Clark on fourth down. Williams then sauntered in for from 38-yards to spark jubilant scenes in Hard Rock Stadium and back in Missouri.. 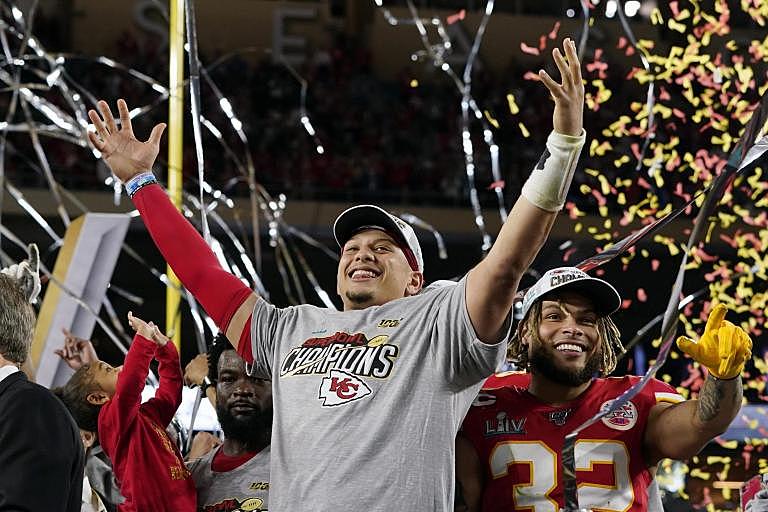 Chiefs quarterback Mahomes took the award after taking over the clash with San Francisco 49ers in the fourth quarter, and…

Daily Mirror
One subscription that gives you access to news from hundreds of sites
Dave Hyde: Patrick Mahomes rises from goat to hero in Kansas City's magical Super Bowl
MIAMI GARDENS, Fla. _ Patrick Mahomes, the story of Kansas City's season, stood with hands on his hips and stared…