People in Tigray are dying due to a lack of oxygen and medicines, a doctor at the region’s largest hospital has said, as medics struggle to care for the sick amid frequent electricity blackouts and fuel shortages.

As the 16-month conflict between Tigrayan forces and Ethiopian government forces drags on, the isolated northern region of 5.5 million people continues to suffer under what the UN has called a de facto blockade.

Staff at the Ayder referral hospital in Mekelle, the regional capital, said they were losing patients who would have otherwise lived. “Patients die. Every day we hear about patients dying because of a lack of oxygen, a lack of this drug, that drug,” the doctor, who could not be named for security reasons, told the Guardian.

Patients are dying because of a lack of oxygen, a lack of electricity, and they cannot keep the babies breathing

Speaking during a rare moment of internet connectivity, he said the wider region was suffering similar problems. That morning, he said, doctors from the northern town of Adwa had told him their hospital, which had “survived looting and destruction” during the early months of the war, was now struggling to keep infants alive.

“They said: patients are dying because of a lack of oxygen, a lack of electricity and they cannot keep the babies breathing. The machines are failing. So they were asking for help but we told them we cannot do anything,” he said.

The World Health Organization has said that, from July until last month, it had been unable to get medical supplies into Tigray, and although some have trickled in, doctors and aid workers said they were nowhere near enough to meet the needs of a population deprived of essentials for months.

The Ethiopian government has rejected the UN’s assertion that it has in effect blockaded Tigray. It said military offensives by the Tigray People’s Liberation Front (TPLF), most recently in northern Afar, had blocked delivery routes.

The government of Abiy Ahmed, Ethiopia’s prime minister, has also accused TPLF fighters of looting equipment and medicines from health facilities in parts of the Amhara and Afar regions that they controlled during the fighting last year. According to Amnesty International, TPLF fighters looted a hospital in the Amhara town of Nifas Mewcha last summer, as well as medical clinics in the town of Kobo and village of Chenna.

The TPLF has previously denied looting health facilities. Amid the claims and counterclaims of their leaders, however, it is civilians who are suffering.

At Ayder, a 500-bed hospital, staff are desperate for many of the most basic medical supplies, including gauze, intravenous fluids and linen-cleaning agents. Despite deliveries by the International Committee of the Red Cross in January and February – the organisation’s first since September – doctors are still reusing gloves for everything except surgery and childbirth, the source said.

The region’s chronic lack of fuel – no humanitarian agency has been allowed to bring in any since August, apart from two fuel trucks in November – is taking its toll on the hospital.

One major headache has been that the diesel generator used during power cuts requires about 2,000 litres of fuel to run for 24 hours. “That has become impossible,” said the doctor. “So we’re trying to use very small generators that can use a small amount of fuel and even that is becoming a real problem. So again, downsizing the service, day by day, that’s what we’ve been doing.”

The WHO said the lack of fuel had hampered its efforts to distribute supplies – the first it had been permitted to deliver to Tigray since July. About 33.5 tonnes of medical stocks have been airlifted into Mekelle in recent days, but most remain in storage because there is no fuel to transport them. Staff at Ayder said they had sent their own lorry to pick up their share of the supplies on Monday.

The doctor and his colleagues have many worries, but chief among them is the fate of their cancer patients, as the hospital has worked its way through even the last stocks of expired chemotherapy drugs and there are none left.

That really broke our heart. We never thought we would see this

“Cancer patients are really suffering,” the doctor said. “We ask them to wait and wait and they keep on coming back, especially now [some] drugs are coming to Mekelle and almost everyone ran to the hospital asking if their drugs arrived. But again, to their disappointment, we told them we have no change at all.”

With no more diagnostic tests in the hospital, the doctor said he was also concerned for people with HIV/Aids, particularly children. “We cannot make a diagnosis of HIV in children. So care is significantly compromised,” he said. Without treatment, up to half of infants infected with HIV die within their first two years.

The Ayder is believed to be the only place in Tigray that still has antiretroviral drugs, but its stock would only last a month, possibly less, the doctor said.

The hospital has seen a big increase in children suffering from severe acute malnutrition, with admissions in the past seven months tripling compared with pre-war levels, according to hospital data. Of 208 children admitted since July, 21 had died, a second doctor at Ayder said. Staff fear that the situation in rural Tigray is even worse.

In January, the UN World Food Programme warned that at least 2 million people in Tigray were suffering from “an extreme lack of food”.

“What’s peculiar about the malnutrition that we’re seeing nowadays is that previously this was from poor families,” the doctor said. “But now even those living in bigger cities like ours, and who used to have reliable monthly income, are now having problems with banking because people cannot withdraw the money that they have deposited in both government and private banks.”

He realised how widespread the problem had become, he said, when several of Ayder’s doctors brought their own children in to be treated. “That really broke our heart,” he said. “We never thought we would see this.”

Aside from the struggles of their patients, the hospital’s 2,000-strong staff have their own problems: they have not been paid, they said, since May.

Ayder’s staff hope that, amid the Russian invasion of Ukraine, the international community will not forget about Tigray. “There are lots of issues for the world, of course, but we are members of the human community,” the doctor said. “We hope some people somewhere will care about our story.” 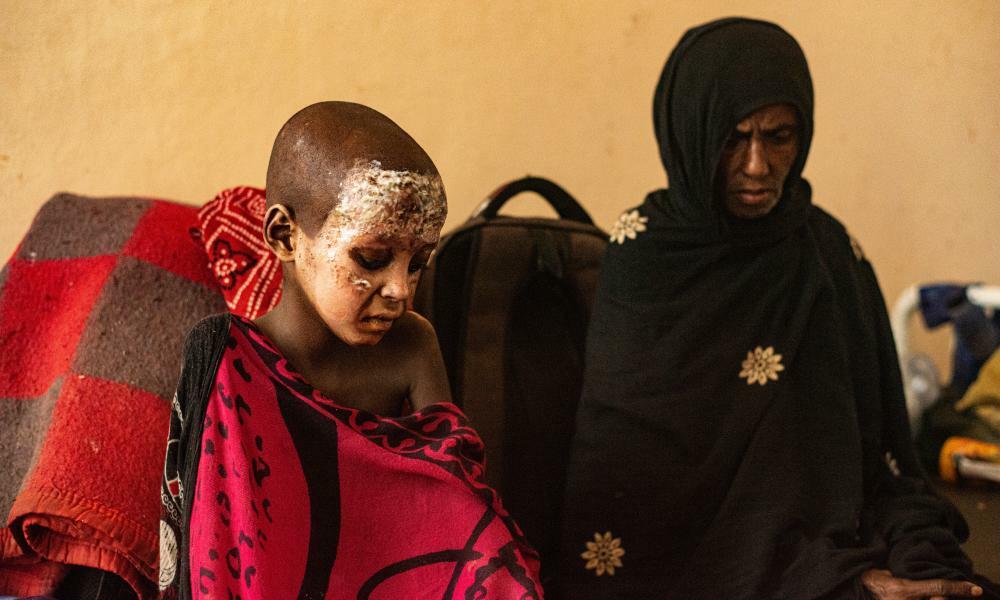 ‘Before they were our brothers. Now I want revenge’: Tigray conflict engulfs neighbouring state
As government officials downplay the fighting in Afar, families are separated, children killed and young people ready to take up…

The Guardian - UK
One subscription that gives you access to news from hundreds of sites
In Photos: Young Patients Shelter In Basements As Ukraine’s Hospitals Face Critical Shortages