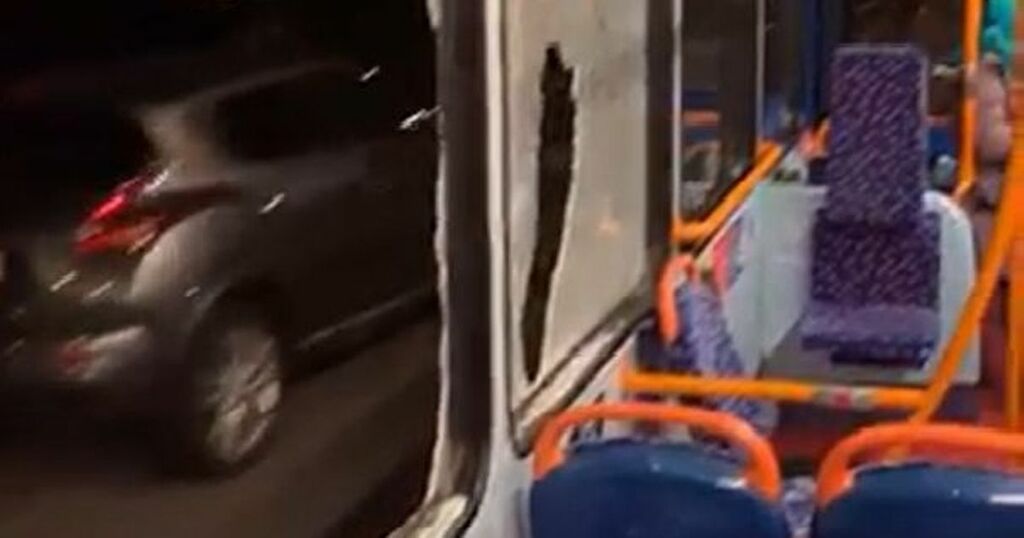 Police have launched a probe after the incident happened at the Buchanan Bus Station rank, off Cowcaddens Road, at around…

Residents have reported a surge in anti-social behaviour at Strathaven Park, with teens spotted knocking back Buckfast in broad daylight.

Her car was broken into while she was away in Barcelona

A passenger has blasted Stagecoach after he was let on a bus which had 'every window smashed' after being vandalised in Stockport.

Shocking footage taken by Konrad Sutton-Burns showed the appalling level of damage to the vehicle as shards of glass could be seen scattered across the floor and seats. The bus had been travelling through the Brinnington estate on Tuesday night where it is believed to have been targeted by vandals.

The 42-year-old, who lives in Brinnington, said he was shocked to discover the state of the number 325 bus after he was allowed to board at around 10pm, along with several other passengers.

Mr Sutton-Burns said there was no seatbelts on the bus and described being able to hang his head out of the broken window as it was travelling at speeds of around 30mph.

Speaking to the M.E.N, he said: "Brinnington is just getting worse and worse, it's beyond a joke now. I actually got on the bus after it had happened.

"I didn't even realise it was like that at first. The driver just charged me and I got on and thought where am I going to sit.

"I didn't really realise the magnitude of it until I sat down. I couldn't believe passengers were being allowed on the bus with it in that state. I was just a bit in shock. I think it's a disgrace I was let on."

Mr Sutton-Burns said pretty much 'every window' on the bus had been smashed. Video footage shows some windows completely emptied of glass, with others appearing to have bits of sharp glass poking through. Konrad said it looked like the break glass hammers used in an emergency had been taken from the vehicle.

"I have been on the bus numerous times in Brinnington where kids just walk on without paying and terrorise the passengers. It's just not on," he said, describing the level of antisocial behaviour plaguing the estate. Residents in Brinnington have complained of a spate of incidents over recent months and years including thefts, vandalism and intimidation of vulnerable people.

"I have lived in Brinnington all my life and it’s getting to a point where people are just really sick and tired of antisocial behaviour," he said. "This incident was extremely dangerous. If you look at the video you could see I could literally hang out of the window whilst it was travelling at 30mph. It's crazy really."

A spokesperson for Stagecoach said: "We are aware of an incident that took place on the 325 bus, on May 10th, involving a group who smashed windows on the bus. We are working with GM and TravelSafe to investigate this incident."

Police have launched a probe after the incident happened at the Buchanan Bus Station rank, off Cowcaddens Road, at around…

Residents have reported a surge in anti-social behaviour at Strathaven Park, with teens spotted knocking back Buckfast in broad daylight.

Her car was broken into while she was away in Barcelona