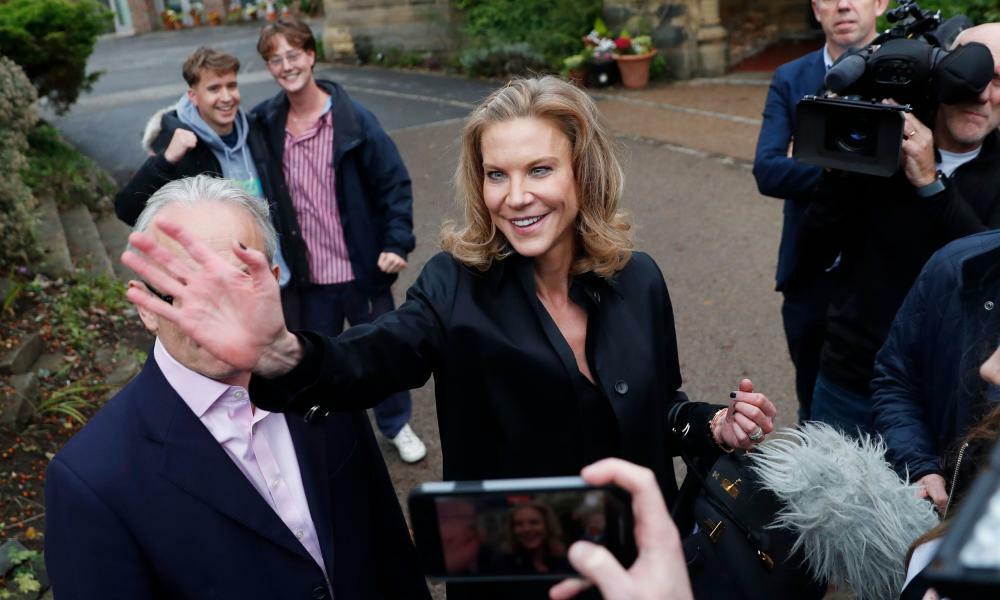 Many of the suited office workers, parcel‑laden shoppers and young mothers manoeuvring double buggies barely gave the cameras a second glance as they took shortcuts through the stadium’s precincts en route to their desks or cars.

As rain clouds threatened to give the statue of Sir Bobby Robson another drenching and damp autumn leaves settled on the walkways, life a short goal‑kick away from the city centre felt almost disconcertingly normal.

If the sight of well-known broadcasters dwarfed by the giant arena behind them filing piece after piece to camera was a little unusual, an uninitiated passer-by could hardly have guessed Newcastle United were about to be taken over by controversial owners set to transform them into one of the world’s wealthiest clubs.

Admittedly the excitement would later build, with hundreds congregating by mid-afternoon and thousands as dusk descended. By then celebratory car horns had begun blaring in the surrounding roads, police crowd control officers were on the overwhelmingly good‑natured scene and the decibel level was rising. Human rights issues were apparently not at the forefront of their minds.

Yet in many respects the mood on Gallowgate as fans finally received confirmation that a Saudi Arabia-led consortium had paid Mike Ashley £300m in exchange for the keys to St James’ was slightly more measured than might have been expected.

The band of supporters who had turned up in the late afternoon clutching a banner spoke for many. Having climbed the steps to an outside concourse they shook it out, unfurling against the wall below them the message: “We don’t demand a team that wins; we demand a club that tries.”

It chimed rather well with the noises from the incoming hierarchy. There were no excitable briefings about a raft of trophy signings or fantasy managerial appointments. Instead the key phrase used was “no knee-jerk reactions”. The manifesto very much revolved around “organic growth”, “due diligence” , “improved infrastructure” and “forensic attention to detail”.

If the ultimate replacement of Steve Bruce with a top manager – Antonio Conte anyone? – seems inevitable, the new regime appears equally fixated with infrastructure. A soon-to-be-appointed director of football will be heavily involved in not merely first-team recruitment but plans to spend about £50m on a new training ground and enhancing the academy. Jason Wilcox, Manchester City’s highly regarded academy chief, is under serious consideration for the role.

Until fairly recently Rafael Benítez, Bruce’s predecessor, had been earmarked to return to Newcastle. The much-decorated Spaniard has joined Everton but the consortium still retains the benefit of his detailed, intelligent plans for a club he knew inside out and shares a similar taste for forensic detail.

Newcastle fans are often stereotyped, erroneously, as hopelessly romantic and deeply unrealistic but one of the reasons they adored Benítez was his attention to the small print.

Ryan Colley and Neil Hall ranked among the minority who reached the ground by lunchtime but they talked not of signing a team of galácticos but finally being taken seriously as a grown-up club. Their overriding emotion, though, was relief. Hall even brought Skye, his 18-month-old Staffordshire bull terrier, along to witness the day the planets finally aligned for their beloved team. “This club’s been slowly dying for 14 years under Ashley,” he said. “It’s fantastic, it feels like a rebirth,” said Colley, sipping from a can of lager stored specially to celebrate the new dawn over Gallowgate.

Whereas Yasir al-Rumayyan, the governor of the Saudi Public Investment fund, aims to use his key boardroom role as the club’s non-executive chairman to turn Newcastle into a global brand, a priority for Amanda Staveley will be reconnecting with such previously disenfranchised supporters – and there are an awful lot of them on Tyneside.

Staveley and Jamie Reuben, the 34-year-old former QPR director, will sit on the board tasked with not only chasing trophies and European horizons but listening to the concerns of supporters and local businesses.

Both were installed at Jesmond Dene House, a discreetly upmarket hotel tucked away in a quiet, ultra-leafy corner of Newcastle. While earlier in the day Steve Bruce and his players had trained as normal, part fearful, part excited as to the immediate future, plane spotters gathered at Newcastle airport hoping for sightings of Saudi planes and a Tynemouth travel agent began selling holidays to Saudi, Reuben and Staveley opted for a blueprint for change against a backdrop of boutique five-star luxury.

The consortium will plough hundreds of millions into local regeneration projects and Reuben’s international property developing family, who own large tracts of the city, will be at the heart of that.

Naturally every possibly available star player is going to be linked with a transfer to Newcastle – fevered talk is already swirling of Harry Kane and Luka Modric – and Staveley on Thursday night acknowledged part of the plan is to win the Premier League. But this takeover is about much more than a place at the epicentre of global football’s greatest soap opera.