Partners in the Indo-Pacific 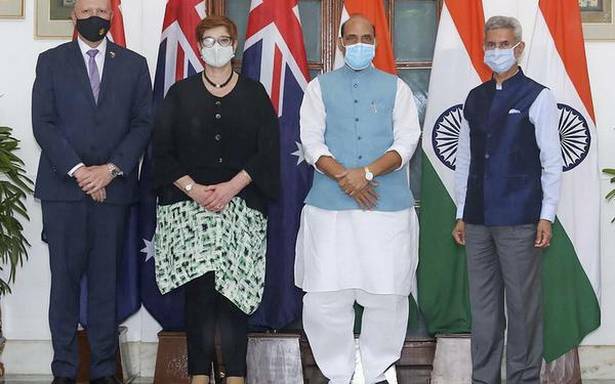 A few days ago, India’s Defence Minister and External Affairs Minister held the inaugural ‘2+2’ talks with their Australian counterparts. Both countries are taking several steps to implement their vision of a peaceful and prosperous Indo-Pacific region.

India and Australia have completed one year of their Comprehensive Strategic Partnership and their bond is deepening. Prime Minister Narendra Modi and Australian Prime Minister Scott Morrison elevated their bilateral strategic partnership to a Comprehensive Strategic Partnership in June 2020. Their personal connection is providing the political framework and impetus to this partnership. There is a growing convergence of views on geo-strategic and geo-economic issues backed by a robust people-to-people connection. Both countries have stepped up collaborations through institutions and organisations on many issues in bilateral, trilateral, plurilateral and multilateral formats. Further, elevation of their ‘2+2’ Foreign and Defence Secretaries’ Dialogue to the ministerial level emphasises the positive trajectory of their transforming relations.

India, Australia to intensify talks on Free Trade Agreement over next two months

Both countries have an enduring interest in a free, open, inclusive and rule-based Indo-Pacific region. It includes stability and freedom of navigation for all nations in the region. Given their common security challenges and in order to enhance regional security architecture, both countries have intensified bilateral security cooperation. They have also stepped up security dialogue with key partner-countries to deepen coordination in areas where security interests are mutual. The Malabar naval exercise by the Quad (Australia, India, Japan, the U.S.) is a step in this direction. While this signals deeper engagement and cooperation between the Quad countries at the strategic level, at the tactical level, it also allows the navies to develop and enhance advanced warfare tactics. In the Malabar naval exercise of 2021, India was represented by the Indian navy stealth frigate INS Shivalik and anti-submarine warfare corvette INS Kadmatt, while Australia was represented by its Anzac-class frigate HMAS Warramonga.

Trading between India and Australia has seen remarkable growth in recent years. Two-way trade between them was valued at $24.4 billion in 2020. The Indian economy is not only one of the largest economies in the world, but it is also going through a tectonic economic transformation. In this endeavour, Australia is a valued partner as both draw their congruence from a rule-based international order, believe in inclusive economic integration in the Indo-Pacific region, and face challenges from a belligerent China. Trade is rapidly growing and encompasses agribusiness, infrastructure, healthcare, energy and mining, education, artificial intelligence, big data and fintech. Both countries are working to build a long-term sustainable economic relation. In a joint communique last month, India’s Commerce and Industry Minister and the Australian Trade Minister announced that an early harvest agreement by December will pave the way for an early conclusion of a bilateral Comprehensive Economic Cooperation Agreement between both countries.

But despite the growth in trade, India and Australia need to resolve old issues that pose a barrier to deeper economic integration. India has a high tariff for agriculture and dairy products which makes it difficult for Australian exporters to export these items to India. At the same time, India faces non-tariff barriers and its skilled professionals in the Australian labour market face discrimination.

India-Australia relations have deepened in the last few decades owing to the alignment of strategic interests driven by a common value system. Both are vibrant democracies which have respect for international laws and a belief in the equality of all nations irrespective of their size and strength. It is expected that the ‘2+2’ dialogue will provide substance to this partnership. Expected meetings between the two Prime Ministers will further deepen political understanding and open more avenues for collaborations. Beyond bilateralism, both countries are also entering into partnerships with like-minded countries, including Indonesia, Japan and France, in a trilateral framework.

The Quad has gained momentum in recent months. The time is ripe for these countries to deliberate on a ‘Quad+’ framework. The geo-political and geo-economic churning in international affairs makes it imperative for India and Australia to forge a partnership guided by principles with a humane approach.

Rajeev Ranjan Chaturvedy is Associate Professor at Nalanda University, Rajgir, and Kingshuk Saha is a Bengaluru-based researcher. Views are personal