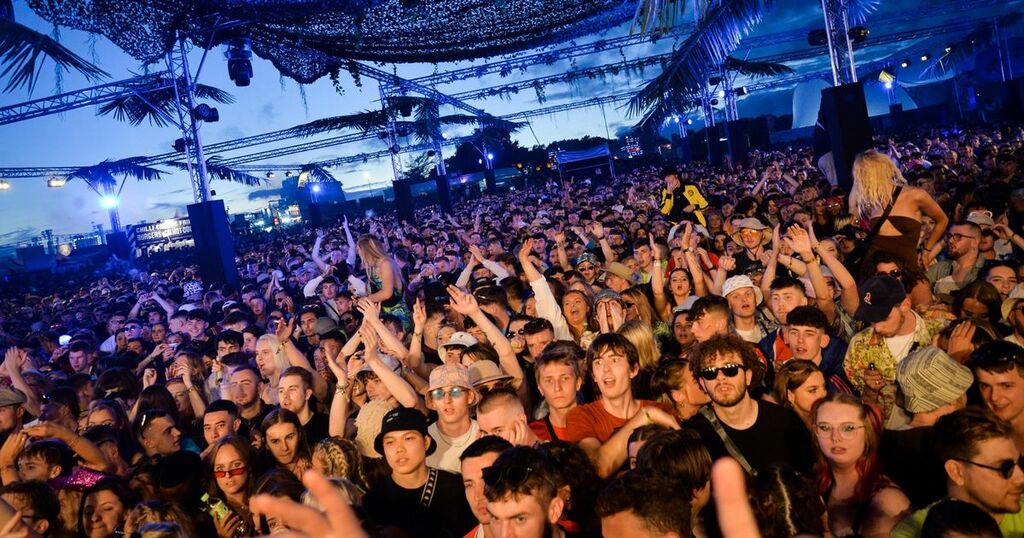 There's so much pent-up energy in Manchester.

We've all spent most of the last 18 months cooped up in our houses, but for the city's young people, who have celebrated 18th birthdays in isolation and spent their formative years on video calls, it's been a long slog.

This weekend's Parklife festival is a real celebration of music, dancing and partying in true Manchester spirit.

The massive line up over the weekend covers dance, hip-hop, soul, R&B, drum and bass and pop music, spread across 10 stages.

When the gates opened at 11am, crowds flocked straight to The Valley, where Carl Cox was warming things up in a mammoth three-hour set.

The smaller G-Stage - popped on top of a small hill right near the main entrance - has had crowds squeezing out the sides of the tent all day long, with lasers and confetti showers and smoke machines aplenty.

As the day wears on and the clouds start to drift away, Burna Boy takes to the Parklife stage, Man Utd shirt on.

He's halfway through his set when he nonchalantly introduces his mate - United star Paul Pogba, fresh from a 4-1 win. As you do.

The immaculately relaxed vibes continue across the field at the Sounds of the Near Future stage, where Celeste stands in an entirely crocheted two-piece like a walking lockdown craft project.

Her Amy Winehouse-esque husky vocals mellow the lively audience down, until she pulls out Stop this Flame, and suddenly people are clambering all over each other, arms aloft.

If Celeste doesn't do the next James Bond theme, there's been a gross oversight.

The party is pumping all evening down in The Valley where Four Tet is churning out a relentless beat, soon to make way to Parklife staple Peggy Gou.

There's a healthy crowd for Annie Mac at the Palm House too - an icon of dance music, she's visibly pleased to be back behind the decks.

But the vast majority of the Parklife crowd pegged it over to the main stage in the evening for Megan Thee Stallion's performance.

It's not a family-friendly performance, it goes without saying - this is, after all, the woman who collaborated with Cardi B on WAP (Google it) - but it's fiery and fantastically entertaining.

Click or swipe through the gallery below to see more photos from day one of Parklife festival.

It's only her second visit to the UK, but she assures us we're 'f***ing lit' and sashays along the barriers taking selfies with the crowd.

Later on, back on the Parklife stage, and it's all about Dave.

Dave takes stage production seriously. No one at Parklife puts so much effort into stage design, lightning, pyrotechnics and props.

He sails onto the stage in a wooden row boat, which looks like it's floating on a pink sea thanks to some giant LED screens. Later, his band will pitch up in the place of his boat.

"I've got a feeling that tonight is going to be a really really good night," he says.

"You guys have waited all day, you've paid the extortionate drinks prices in here. This isn't the end of party, I wanna get it started."

No Words soon gets that addressed - even people queueing for a hot dog are dancing and singing together.

Dave became a viral sensation in 2019 when he pulled an audience member out of the Glastonbury crowd to sing Thiago Silva with him, and it's more of the same tonight with an enthusiastic young lad in a bucket hat rapping the lyrics word for word.

Later on, he tells us this is "The most important show I've ever done and the most important crowd I've ever played." He says he turned down every other festival except Parklife, but 'had to come home, I had to be with you guys'.

There's a definite lull once he climbs up to sit at the piano - though his musical talents are impressive - but that's soon address by a surprise appearance from none other than Stormzy.

The two rap legends bound around on stage together as fireworks explode overhead, exchanging hugs and having a riotous good time.

Just like the rest of the Parklife crowd, really.