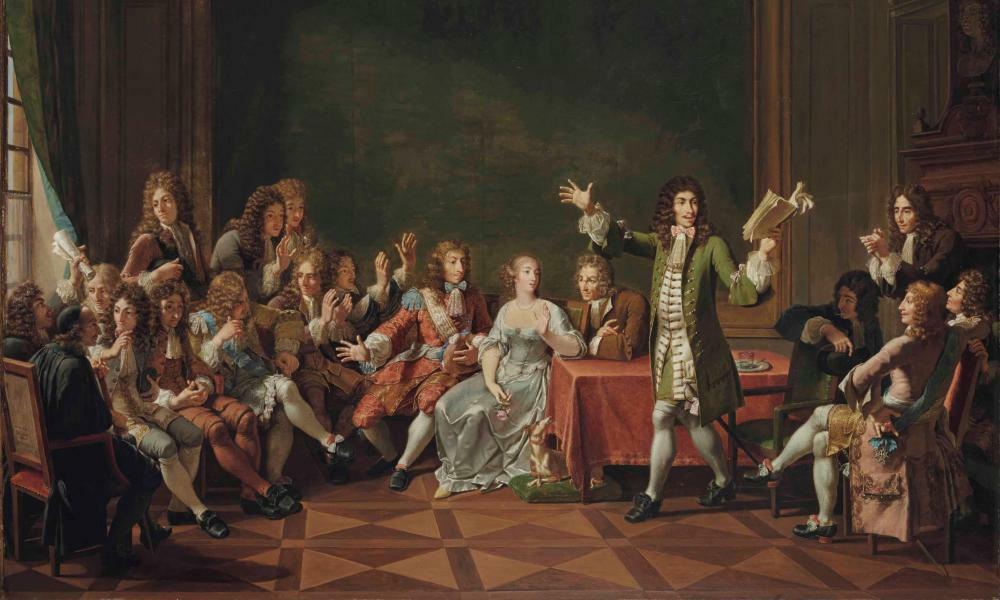 French theatre is gearing up to pay tribute to one of its founding fathers: Molière, the 17th-century playwright whose biting comedies still form many French schoolchildren’s introduction to drama. On 15 January, 400 years after his baptism (the exact date of his birth is unknown), the venerable Comédie-Française company will open this anniversary year with the play that came perilously close to sinking Molière’s career: Tartuffe.

While the first version of the play got the approval of Louis XIV himself in 1664, its satire of Catholic zealots drew the ire of the Catholic church. At the time, accusations of impiety could send a playwright to the stake, and Tartuffe was swiftly forbidden. Yet Molière persisted, switching gears and rewriting the play to suggest that his target wasn’t religion or true believers – but rather the hypocrisy of those who feign virtue. (The word “tartuffe” came to describe such characters in life, too.)

It worked. By 1669, a new, longer version of the play – in five rather than three acts – was allowed and met with acclaim, and researchers now see Molière’s political and social acumen as a key factor in his rise to classic status, even before his death. “Molière was brilliant at this: he had this sense of opportunity, a gift for improvisation,” says Georges Forestier, a Molière specialist and professor emeritus at Sorbonne Université in Paris.

And this month, thanks to Forestier and his colleague Isabelle Grellet, the Comédie-Française’s audience will be able to experience the original Tartuffe again – or at least a text as close to it as possible. While the 1664 play didn’t survive, the duo used a method that Forestier calls “theatrical genetics” to recreate it. It relies on sources the era’s playwrights drew heavily on, such as commedia dell’arte scenarios and existing short stories, to piece together a play’s original plot.

The result is a tighter, more streamlined Tartuffe, focused on the eponymous antihero – a religious beggar who is welcomed into a well-to-do family – and his hosts, Orgon and his wife Elmire. Some characters, such as the young beau Valère, have disappeared entirely along with the second and fifth acts, identified as later additions.

The prominent Belgian director Ivo van Hove will direct what is set to be a curious event – a “new” Molière play at the House of Molière, as the Comédie-Française has long been known. The opening night will be relayed live in cinemas in seven countries, and marks the start of a yearlong celebration for the French company, which was born of the fusion of Molière’s troupe and another, in 1680: its entire 2022 lineup will be dedicated to Molière.

Van Hove originally considered tackling Tartuffe years ago, after staging Molière’s The Misanthrope and The Miser in other countries, but he was discouraged by the standard five-act version. “It’s so artificially made up, due to the pressure from the church,” he says between rehearsals. “I never liked it, and I didn’t know how to solve it.”

Forestier and Grellet’s three-act version convinced him. “It’s what he intended it to be,” Van Hove says of this old-new Tartuffe, presented under its original title (Tartuffe or the Hypocrite, changed in 1669 to The Impostor). The director has added a prologue and epilogue to set the scene, and sees the play as a “social drama”.

Ever the pragmatist, Molière knew when to back down – and when to take risks, too

“This Tartuffe is invited into their home, and then the whole family, every individual, starts to change,” he says. Forestier stresses, however, that while Van Hove sees Tartuffe’s relationship with Elmire, the lady of the house, as a love story, the text doesn’t necessarily support this idea.

Ever the pragmatist, Molière knew when to back down – and when to take risks, too. As Tartuffe and the ensuing controversy demonstrate, he was the first comic playwright in France to leave stock comedy characters behind and tap into zeitgeisty themes, including the education of women, freedom within marriage, fanaticism and fashion. And while conservatives disapproved, he found an eager audience in Louis XIV and his court. “When his career takes off, the king is in his 20s,” says Marine Souchier, a postdoctoral researcher who studied the playwright’s career trajectory. “Molière speaks to a pretty young crowd at court and among the bourgeoisie, and is rather progressive for this era.”

And Molière, who was also known for his innovative acting, wasn’t averse to stoking controversy in order to generate interest. When his 1662 play The School for Wives came in for relatively mild criticism from some quarters, he seized the opportunity to publicise his work with the help of a friend, Donneau de Visé, who purposefully stoked the flames in articles. Then Molière himself said he would respond – and did do with a new play, The Critique of the School for Wives, in which he ridiculed his detractors.

“He kept the buzz going,” Forestier says with a chuckle. According to Souchier, it was an entirely conscious career move – and it paid off: “Thanks to this strategy and his logic of constant innovation, he achieved a level of success that was really unusual at the time, and it cemented the legend after his death.”

When Tartuffe returned to the stage in 1669, Molière even anticipated that there was money to be made out of what had become a cause célèbre. “The box-office takings were huge,” Souchier said. “We surmise that Molière’s company set higher prices because they knew it would be sold out.” Four centuries later, expect Van Hove’s Tartuffe, and the many more Molière productions scheduled this year, to pack playhouses again.