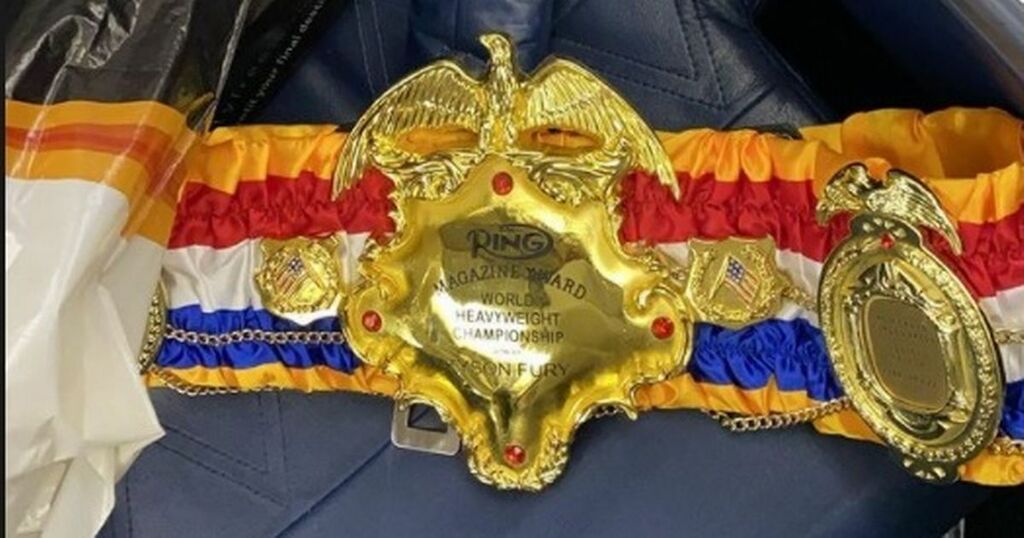 Tyson Fury is ready to take on Deontay Wilder this weekend as he looks to defend his titles in Las Vegas.

The pair face each other for a third time as they complete their trilogy of fights, with the Gypsy King aiming to hold on to his WBC and The Ring belts.

Fury won both when he dismantled Wilder last year, but will be putting them back on the line after another rematch was triggered following the Bronze Bomber’s defeat.

Fury has been proudly displaying his WBC belt in the build-up to this weekend’s bout, carrying it with him during the pre-fight press conference on Wednesday night.

The Ring belt though was nowhere to be seen, and has taken a very different journey to be reunited with its owner in Las Vegas.

The title is awarded by premiere boxing magazine The Ring, which has been awarding a linear title to each division since it began publication in 1922.

Fury won The Ring’s title back after defeating Wilder last year, having first won it following his victory over Wladimir Klitschko in 2015 before vacating it in 2018.

Having made his way over to Las Vegas early in preparation for this weekend’s bout, Fury chose to leave the belt behind in the UK, although it has now found its way over to the US.

Fury’s wife Paris brought it with her as she made the journey over to Nevada, and she was given some very specific instructions on how it needed to be transported.

“I have carted this thing on my shoulder from Manchester!” Paris wrote on her Instagram story.

“Feeling like a wally but the team said put it in your hand luggage. I didn’t bring any and at the last minute I got scared my check in case would get lost in transfers so grabbed it out. Everyone congratulating me like it’s mine.”

The belt will be seen again when Fury takes on Wilder in the ring, and the Brit will hope to be taking it back with him on the flight home.