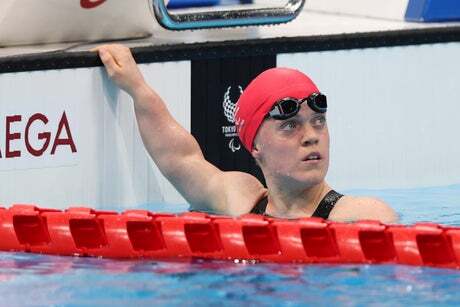 Paralympic swimmer Ellie Simmonds has officially confirmed her retirement from the sport.

The 26-year-old won five Paralympic medals having made her debut as a 13-year-old at Beijing 2008.

She was one of Paralympics GB’s flagbearers at the Tokyo 2020 opening ceremony, but missed out on a medal in Japan.

“I’ve heard it said by others that you know when it is time to call it a day, and having given a lot of thought to it, I know that now is the right time for me,” Simmonds said.

“Since my first international competition in 2006 aged 12 to the Tokyo Paralympics, competing for Great Britain has been the greatest honour of my life.

It’s time to hang up the goggles x pic.twitter.com/sNy4uufu0F

“From having my dreams come true as a wide-eyed and excited 13-year-old in Beijing and then competing in a home Games in 2012 through to now it’s hard to convey just how proud, honoured and grateful I am for everything, not least the wonderful support I’ve had.”

Born in Walsall, Simmonds small stature is due to achondroplasia.

“To all my GB teammates past, and those currently on the team, thank you! I can’t wait to watch you smash it in the future,” continued Simmonds.