Panthers predictions: How Week 1 vs. the Jets will unfold 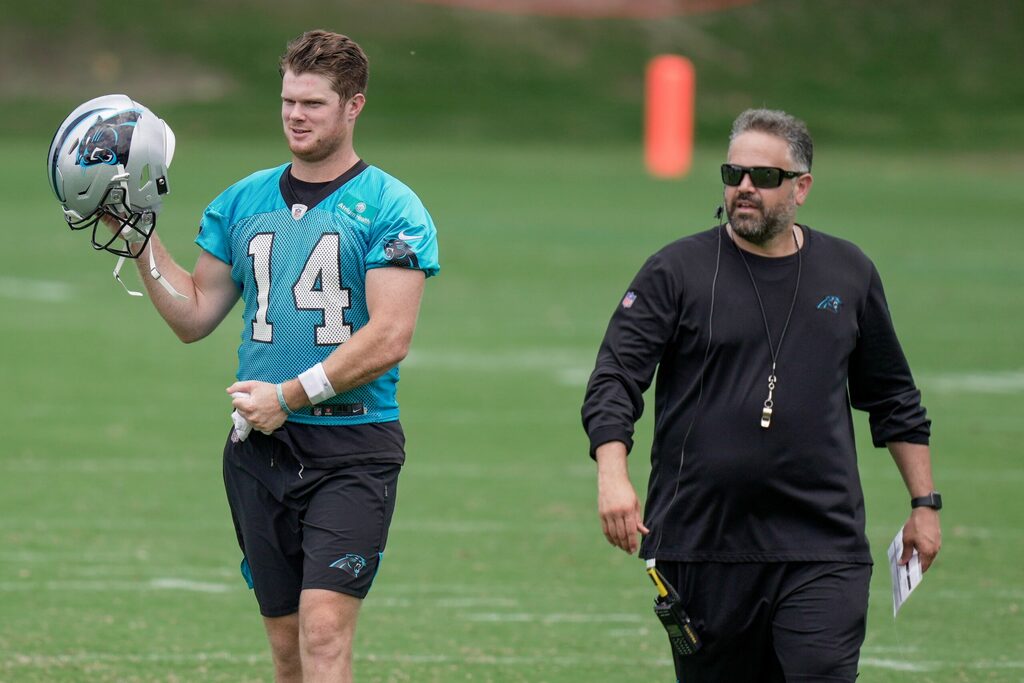 Will this season be any fun for the Carolina Panthers? Honestly, who knows?

So let’s make sure we have our fun, regardless. Instead of rolling out a run-of-the-mill, outplayed prediction column, how about a more playful, in-depth series of forecasts for each week?

And, to keep us accountable for even more fun, you can check back here following the game to see how many of these predictions we ended up nailing. We’ll post a post-prediction post (man, that’s a lot of posts), tallying up our rights and wrongs for a running record throughout this 2021 campaign.

Rhule has seemingly dumped his famous (or infamous) smock look, instead sporting polo and long-sleeve options during preseason action. Until we see it again, the smock stays in the closet.

In a factoid that means nothing, head coaches in the first year with their new teams in 2020 were 2-3 in their Week 1 coin tosses. New York’s Robert Saleh falls into the right side of that column and gives Carolina the opening choice.

A stagnant start for the second overall pick, as the Panthers stuff the Jets on two runs and force an incompletion to force a three-and-out on the opening drive. The Panthers starting unit has looked fast and get off to a fast start.

Even in what’ll likely be a sharp opening script from offensive coordinator Joe Brady, Darnold will dip his feet in the water early. The Panthers pick up one first down on their first possession, courtesy of star running back Christian McCaffrey, and punt it back.

Already a fan favorite in Carolina, Santoso boots through the first points of the game. It comes on a 41-yard field goal in the first quarter.

Is “second salvo” even a thing? Regardless, Brady’s offense has had trouble in the red zone in his short tenure, as they ranked 28th in red zone offense last year. Those struggles popped back up in the preseason. Santoso caps off a fairly impressive drive with an easy 29-yarder.

Wilson throws at least one interception in the first half

Another preseason theme for Carolina was their stingy starting defense. The unit, when on the field together in exhibition play, forced a pair of picks in just a handful of drives. Wilson was drafted, in part, for his gunslinger’s mentality, but it will come back to bite him in his rookie season.

He also gets sacked. By DE Brian Burns. A few times.

2021 will play host to the big breakout campaign of Burns. Although he’ll have to deal with stud left tackle Mekhi Becton at times, he finishes the contest with 1.5 sacks.

But he also turns in an okay performance

Again, Wilson will have to deal with growing pains in his first year. Who doesn’t? But we see the Panthers getting out to a multi-score lead, allowing Wilson to pad up his numbers a bit against a softer defense to get this game a little closer. He ends with around 250 passing yards and 40 rushing yards with at least one touchdown.

The strong connection that started with the Jets, ends up burning the Jets. Darnold takes a bit to settle in, but protects the rock while throwing for 270 yards and a pair of touchdowns. Anderson accounts for at least 100 of those yards and one of those scores.

Result: Panthers win (by less than a touchdown)

After having much of the game under control, Carolina staves off a late comeback attempt to top this rebuilding squad that’s barely in its infancy.