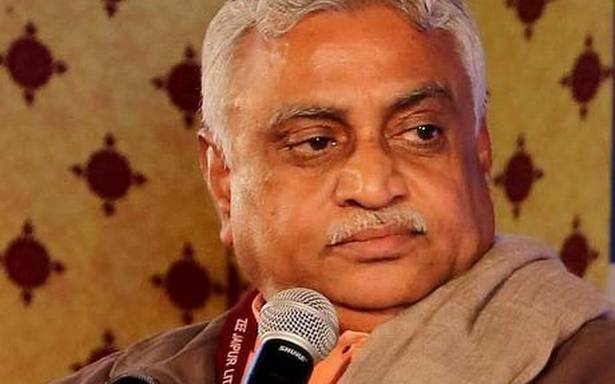 Mr. Vaidya was speaking at the inauguration of magazine’s new office at Mayur Vihar on September 6.

“Panchjanya dharma yudh ka shankh naad hai. Aur dharma yudh main do paksha honge, jo dharma ke paksha main nahin hain aise bhi Shrestha logon par baan chalaane padenge [Panchjanya heralds the dharma yudh, which has two sides. You can have good people on the wrong side, and you will have to shoot your arrows aimed at them too],” he said.

He added the nationalist viewpoint was gaining ground over forces inimical to India, but the war would go on for a long time [yeh ek lambi ladai hai].

The speech was livestreamed on Panchajanya’s Facebook page and later put out as a recording too.

Mr. Vaidya’s speech at the inauguration of the new office is significant as it comes just a day after Mr. Ambekar distanced the RSS from the magazine’s cover story.

Mr. Ambekar, after a furore over the cover story that alleged that Infosys Trust was funding forces inimical to India, and its mess of India’s income tax portal had reduced trust between the people and the government, had tweeted: “As an Indian company, Infosys has made seminal contribution in progress of the country. There might be certain issues with a portal run by Infosys, but the article published by Panchjanya in this context only reflects individual opinion of the author.”

He added, “Panchjanya is not the mouthpiece of the RSS and the said article or opinion expressed in it should not be linked with the RSS.”

Both Panchjanya and Organiser are published by Bharat Prakashan and are considered mouthpieces of the RSS, although it is denied by the organisation.

“There are nine publications started by swayamsewaks but are not formally a part of the RSS,” said a senior member of the RSS. Both magazines reflect the ideological concerns of the Sangh Parivar and are often seen as speaking out on these issues.