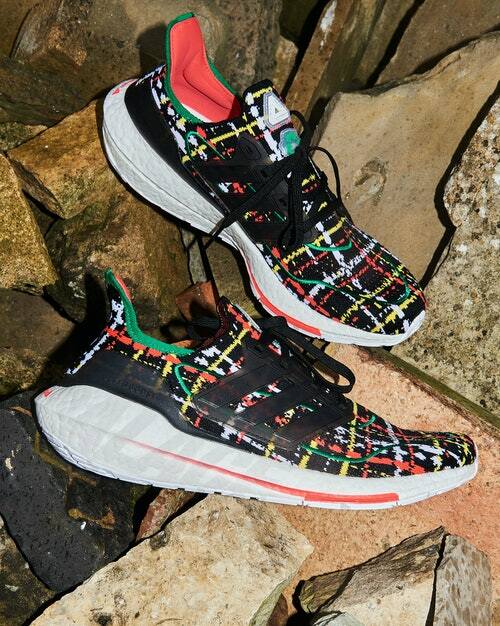 After collaborating with Adidas on some of the coolest yoga attire you’ll ever see, Palace is now focusing its attention on running with stripes.

The close partners return with a new capsule headlined by two colorful variants of the Ultra Boost 21. Available with either a black or white upper, Palace’s Ultra Boosts feature a chaotic, multi-color grid not unlike the Tube map in the brand’s hometown of London. And just like Adidas’ other Ultra Boost 21s, the sneaker is made using a knit Primeblue fabric made from “at least” 50-percent recycled Parley ocean plastic — the sustainability of which Palace chose to highlight in a hilarious promotional video.

In the spot, the kicks are seen in action outside, albeit on a treadmill placed on the dock of a lake. After highlighting the Ultra Boost 2’s sustainability cred, the narrator caps off the clip with the addendum, “And also, they're just quite banging trainers,” which is absolutely the case.

Joining the kicks is a small assortment of running accessories in black and white consisting of a five-panel hat and socks. Both are made using Adidas’ Primegreen fabric featuring zero virgin polyester, with a composition of 68 percent and 97 percent, respectively.

The socks are lowkey the hottest item of the lot thanks to a massive Palace recycling graphic on the back of the ankle. The same mark appears as a rubber patch on the Ultra Boost 21’s tongue, along with Palace’s standard logo which sits just above it. On the Boost midsole’s lateral side, you’ll also make out Palace’s name spelled out in faint lettering.

Adidas’ Ultra Boost 21 packs 6 percent more Boost cushioning than the previous year’s model and features the lines first Linear Energy Push torsion system, making the forefoot 15 percent flexible at the forefoot while increasing responsiveness. Should you be in the market for a running shoe, the UB21 is a fantastic choice, and Palace’s riff on it will drop this at 11 a.m. ET this Friday, October 15, through its website and physical stores.