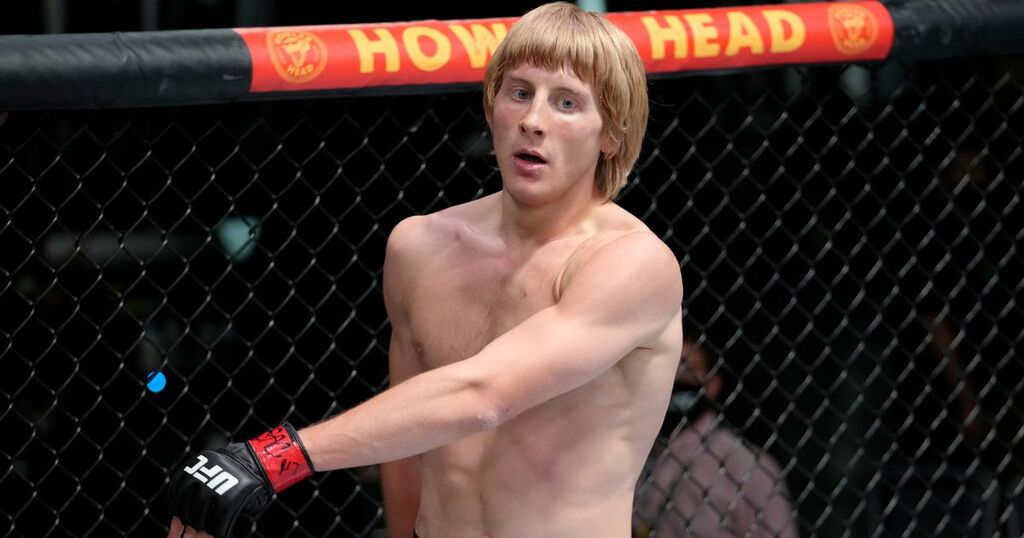 Paddy Pimblett has told Jake Paul to get his cheque book out if he wants to make a fight happen.

Pimblett has become an immediate sensation in America since making his UFC debut, garnering over half a million fans on Instagram.

And following his brilliant first-round win over Luigi Vendramini in his first Stateside fight, the Scouse fighter was included in a list posted by Paul's promotional company "Most Valuable Promotions" of future opponents.

The company shared a screenshot of a Mirror Fighting article in which Pimblett offered to KO the YouTube star after his debut, with a caption alluding to him being one of "five options for the future".

And speaking to Mirror Fighting , Pimblett admitted that the prospect of facing the much bigger Paul does interest him.

"That's a belter that," Pimblett said when told about the social media post. "Get your f***in' dough out. Get the money out, I'm here lad, I'm ready if the dough's right.

"He's a bad sausage, I was asked about him and I just told the truth about him, he's a bad mushroom. If he ever wants a real fight, I'm here to punch his head in. But I'm not calling him out, I wouldn't stoop that low."

Who wins a fight between Paddy Pimblett and Jake Paul? Let us know in the comments!

Pimblett was one of five fighters included in the post on Paul's "Most Valuable Promotions" page, with Jorge Masvidal, Derek Brunson, Anderson Silva and Mike Perry the other names included.

All bar Silva are currently signed to the UFC, so the likelihood of a crossover fight is slim, as Paul's relationship with the promotion and its president Dana White is strained at best.

And he is currently undergoing talks for a bout with Tommy Fury, with sources telling Mirror Fighting that the intention is to face the Love Island star in December.

Paul most recently defeated former UFC welterweight champion Tyron Woodley to go 4-0 in his professional boxing career, but he has yet to face anybody with a boxing record in the paid ranks.

His first opponent, fellow YouTuber AnEsonGib had gone 2-0 in the amateurs, but was wildly outmatched in both size and ability when he stepped in the ring with Paul.

And his next rival, basketball star Nate Robinson, famously only started training when the bout was confirmed.

Paul brutally stopped Robinson with a viral second round knockout, which set up a bout with Olympian and former MMA world champion Ben Askren.

But Askren was notorious for his lack of stand-up skills in his own sport, and was easily stopped in the first round of their April match-up.

Woodley was his toughest test, rocking the YouTuber in the fourth round and taking him to a split decision after eight rounds, but also had no prior boxing record.

Fury is 7-0, with 10 amateur bouts, and would likely be the favourite if the match were to be announced.