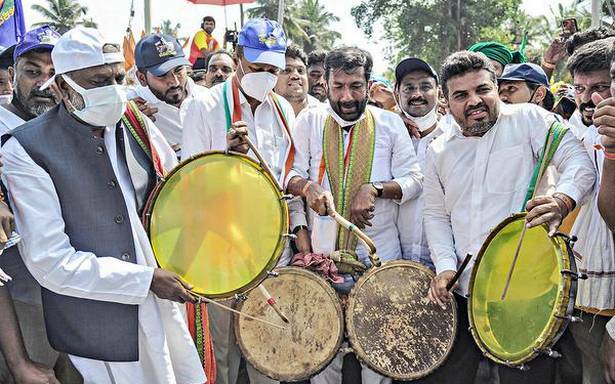 The State Government, which has been questioned by the High Court of Karnataka on Congress Padayatra from Mekedatu, is preparing its response to the court even as it is under pressure from its own legislators from Bengaluru city to stop the march.

In the meantime, continuing its action against participants of the Padayatra on Wednesday, it filed fresh FIRs against 64 Congress leaders, including Leader of the Opposition in the Assembly Siddaramaiah and KPCC president D.K. Shivakumar.

Late on Wednesday evening, Chief Minister Basavaraj Bommai confabulated with senior officials from the Police, Home, and Law departments, including the Advocate General. However, details of the discussion were not made public.

While the Government was rapped by the court, it also came under pressure from the city’s BJP legislators even as the third FIR naming 64 people were registered for violating COVID-19 norms. On Wednesday, expressing fears over the spread of the pandemic, a group of BJP legislators urged the State Government to prevent the Padayatra from entering Bengaluru.

While two FIRs naming 30 and 41 people, respectively, including Mr. Shivakumar, had been filed earlier by the Sathanur police, the third FIR has been filed naming 64 people by the Kanakapura police under provisions of the Karnataka Epidemic Diseases Act, 2020.

On Wednesday, in a joint press conference convened here by legislators Arvind Limbavali, Ravi Subramanya, Uday Garudachar, and Satish Reddy, the legislators requested the Congress to drop plans to bring Padayatra to the city while urging the Government to initiate action against the Congress if it remained adamant.

“What is the necessity for a Padayatra when COVID-19 numbers are rising. In a city with a population of 1.3 crore, the Padayatra could play a role in rapidly spreading the pandemic not just in the city, but also in other parts of the State,” Mr. Limbavali said. Threatening to protest peacefully against the Padayatra, Bommanahalli legislator Satish Reddy said: “Since the numbers are rapidly doubling, it should be stopped. We also know how to stop it.”

Stating that all party members could have a discussion on bringing out a comprehensive water policy for the city at a later date, Mr. Subramanya urged the Congress to stop politicising the issue while Mr. Garudachar, Chickpet legislator, feared spread of the pandemic in his constituency owing to dense population. “Please do not bring the Padayatra to my constituency,” he said.

Criticising the Congress decision to continue with the Padayatra, Home Minister Araga Jnanendra accused the party of trying to draw political mileage from the Padayatra and precipitating the COVID-19 crisis in the State. “Already, several Congress leaders who had taken part in the programme have tested positive for COVID-19 and got admitted to hospital,” he added.

Meanwhile, the Padayatra, which started at Sangama in Kanakapura taluk on Sunday, reached Ramanagaram town by Wednesday evening.