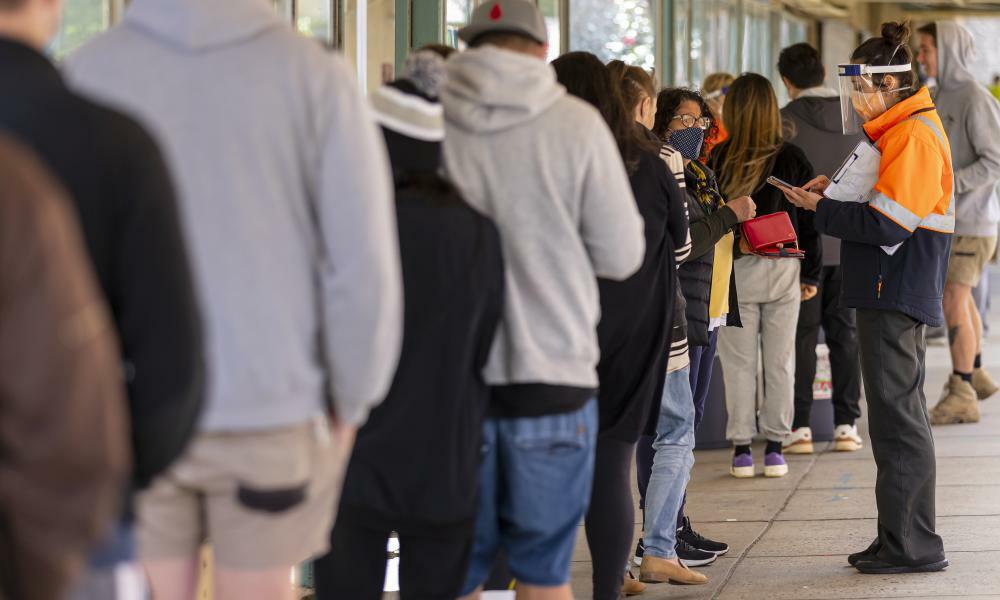 Lifting lockdown restrictions in two stages in New South Wales could overwhelm intensive care units for up to five weeks over the Christmas period, according to modelling from a new expert advisory group.

Easing restrictions when 70% of NSW adults are fully vaccinated and further relaxing rules at 80% would lead to a “worst-case scenario”, suggests OzSage, a recently formed advisory group of experts in epidemiology, health and economics.

The finding is at odds with separate modelling from researchers at three universities, which last month suggested that reopening at an 80% vaccination rate for adults would result in 4,000 fewer deaths across Australia than reopening at 70%.

The Doherty Institute modelling, which forms the basis of national cabinet’s four-stage reopening plan, suggests that if Australia opens up at 80% with partial public health measures such as contact tracing and quarantine, there would be 761 deaths nationally over first six months after reopening, compared to 1,457 deaths at 70%.

Experts at the Grattan Institute, meanwhile, “do not support opening up” until 80% of Australia’s total population is vaccinated, requiring a higher vaccination rate in adults.

OzSage has more than 80 members, including Prof Brendan Crabb, director of the Burnet Institute, Prof Brian Schmidt, vice-chancellor of the Australian National University, and Prof Nancy Baxter, head of the school of population and global health at the University of Melbourne.

It has developed independent recommendations for Australia’s reopening.

The group advocates for the elimination of Covid in Australia, with no sustained community transmission and only occasional outbreaks – an approach that other scientists believe is no longer possible, particularly in light of more transmissible variants such as Delta.

Fully vaccinated people in NSW will enjoy greater freedoms in October when the state reaches 70% double-dose vaccination, as per the government’s reopening roadmap released last week.

Presenting the OzSage modelling at a press briefing, Prof Raina MacIntyre, head of the biosecurity research program at the University of NSW’s Kirby Institute, said a two-step reopening would lead to an extended “code black” scenario, where demand for ICU beds across the state for both Covid and non-Covid patients exceeds 926 patients a day.

“That’s the worst-case scenario. It gives you five weeks of code black from the 9th of December to the 15th of January,” she said. Under that scenario, the model predicts total ICU patient numbers would peak at 1,192 on December 26, with 1,169 Covid deaths by February 1 next year.

According to NSW government modelling undertaken by the Burnet Institute, which does not take into account restrictions easing at 70%, hospitalisations in the state are expected to peak in October.

MacIntyre said: “When the restrictions are relaxed, there will be a larger second peak that will occur that may, depending on how it’s managed, threaten the provision of healthcare.”

Dr Greg Kelly, a paediatric intensive care specialist and an OzSage member, said there was “no doubt” the quality of healthcare in NSW was already substandard as a result of Covid.

“Young people shouldn’t die at home without prompt medical attention,” he said. “We’re already not doing many of the things that we’re meant to be doing: scheduled major surgery, like cancer and heart surgery … As the system gets more overloaded for longer, the quality of the care that we provide gets more and more degraded.”

Prof James McCaw, who is part of the Doherty Institute’s modelling group and is not involved in OzSage, agrees that if there was too great a relaxation of measures, the virus would spread rapidly and put the health system under “harmful and avoidable strain”.

“Consistent with the work from the Doherty modelling, it supports a continued adaptive response which aims to minimise escalation of cases and hospitalisations.”

OzSage suggests the best-case scenario is a single relaxation of restrictions in NSW at 70%, with more extensive testing and rapid contact tracing.

An assumption in the modelling is that there would be greater freedom of movement if restrictions were eased at 80% compared to 70%.

Prof Catherine Bennett, who is chair in epidemiology at Deakin University and is not involved in OzSage, said modelling the effect of lifting lockdown was made difficult by differing restrictions across NSW.

“Not everyone responds to the easing of restrictions in the same way,” she said.

OzSage also recommended maintaining restrictions in NSW until at least 85%, and preferably more than 90%, of Aboriginal and Torres Strait Islander people in the state are fully vaccinated.

More than 1,500 Indigenous people had contracted Covid since the beginning of NSW’s current outbreak, she said.