Oysters on the menu this Christmas, but you'll have to be quick 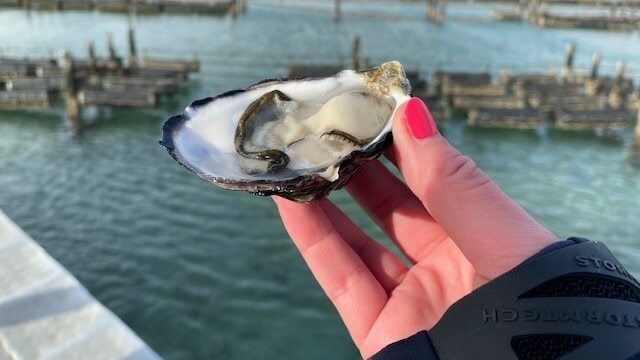 Oyster growers are expecting a surge in demand on the eastern seaboard as COVID-19 restrictions begin easing in New South Wales.

The state will begin reopening on Monday after surpassing a target of 70 per cent of the population being fully vaccinated.

Fully vaccinated people will be allowed to go to restaurants and cafes in groups of up to 20 people.

"We are sending product out to the east coast at the moment but [the reopening] will certainly increase the volume that's heading out," oyster grower Carly Thomson said.

Ms Thomson, the co-owner of Gazander Oysters at Coffin Bay on South Australia's Eyre Peninsula, said there would be a big push to get excess stock to market.

The uptick in demand would help growers put oysters in front of diners before oysters started to spawn.

"We're a seasonal product, so we're on a finite timeline before oysters go into their spawning," Ms Thomson said.

"As the temperature heats up they go into the reproductive process where they start to build spawn then they obviously release that, and the oysters won't be in very good consuming condition at all."

She said spawning depended on tidal patterns, the weather, and the location of the oysters and was difficult to predict.

Oysters on the table at Christmas

Triploid oysters — extra-large oysters bred to be sterile so they are available year-round — will be on the menu for many Australians this Christmas.

"There are triploid stock in the market this year … for the first time in many years, so that'll be very good for the oyster lover at Christmas, but will be limited," Ms Thomson said.

"Just depends who has them and at what age and whether they're ready to go."

While 2020 created logistical nightmares for growers needing to get oysters on plates, it also forced Ms Thomson to innovate.

"We're still doing that — pop-up shops in Adelaide and we go to a lot of restaurants direct as well," she said.

"And there are a lot of people doing similar things all through Adelaide and [South Australia's] west coast.

"My brothers with their business go interstate with the same sort of model, and hit lots of regional areas and that's been hugely successful for them."

Ms Thomson was anticipating a busy few weeks ahead.