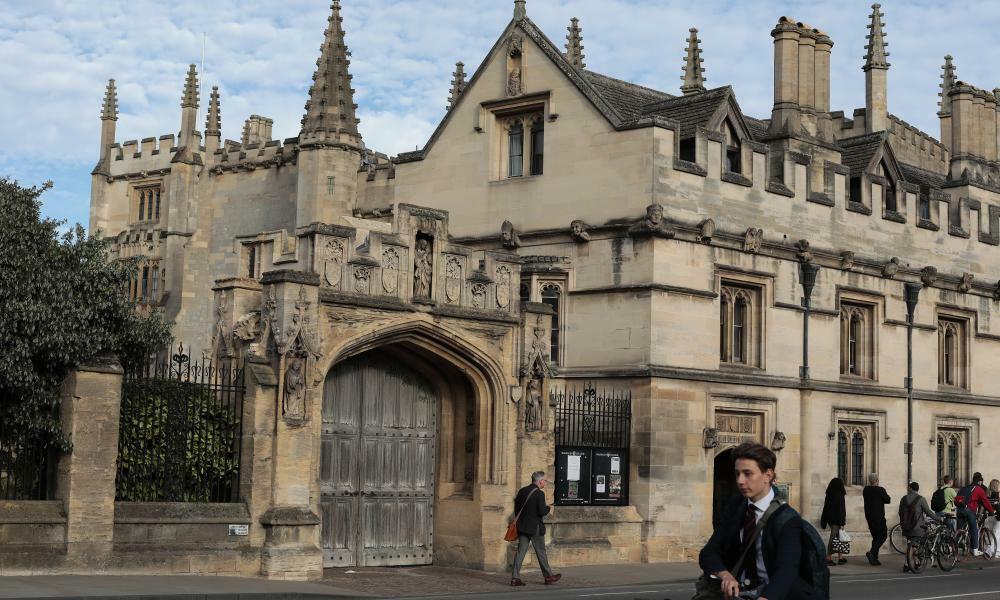 In the early hours of last Friday Rory Maw, the bursar of Magdalen College, Oxford, pushed back from his computer screen and drank “an entire bottle of champagne to myself”.

After months of late-night video conference calls, Maw had just completed a blockbuster property deal that will transform Magdalen’s fortunes, making it probably the richest of Oxford’s 39 colleges.

Now, following the formal announcement of Maw’s deal to sell a 40% stake in a science park the college owned to Singapore’s sovereign wealth fund for £160m, the students are demanding Magdalen and the other rich colleges share more of their “staggering wealth” with the communities they serve.

Jade Calder, a history student and co-chair of Class Act, a student campaign group supporting students from working-class backgrounds, said the colleges were “already staggeringly wealthy” and should be using their money to increase diversity.

“Across the country 93% of university students are state school educated, yet at Oxford it is 68.6%,” said Calder, who is from Manchester and who is the first member of her family to go to university. “They need to do more to bridge that gap. The university has the resources to support far more poorer students than it does.

“You always feel like the university could just give you a bit more money, it’s got billions of pounds in the bank. I have friends who are struggling to pay for accommodation, and you do think who is all this wealth for the benefit of?”

Anvee Bhutani, the president of Oxford’s student union, also called on the colleges to share more of their riches with current students and for bursaries to encourage more applications from minority groups.

“Oxford and its constituent colleges have a lot of money but oftentimes, having this money in investments and endowments means that they are unable to draw on it on a day-to-day basis,” said Bhutani, 20, an Indian American studying human sciences at Magdalen.

“As the Oxford University student union president, a lot of what I lobby for requires monetary contribution from the colleges or the university and it is difficult to push for change when colleges are reluctant to use this money imminently. I would really hope and advise that colleges prioritise and financially support current initiatives around big issues such as sustainability, diversity, access and more, as these things are what will shape Oxford for years to come.”

The huge payday – which values the Oxford Science Park at 10 times its value just five years ago – will more than double the size of Magdalen’s endowment fund to more than £600m.

The 563-year-old college, which counts Oscar Wilde, Julian Barnes and George Osborne among its alumni, will now jostle with its historically prosperous rivals St John’s and Christ Church for the title of Oxford’s richest college.

It also underlines the growing gulf between the haves and have-nots in the world of academia: last year the Institute for Fiscal Studies warned Covid-19 could threaten the viability of at least a dozen UK universities.

Dinah Rose, the president of Magdalen, said the science park deal gave the college a “once-in-a-generation opportunity to safeguard the College’s future as a strong and inclusive community of outstanding scholarship, teaching, and research”. That would enable it to “meet the challenges of the next decades, encourage all our members to thrive, and equip the college to make a substantial contribution to the public good”.

Maw, who is also chief executive of Oxford Science Park, said the funds from the deal would be fed back into increased support for the college’s teaching and bursaries but warned there would be no quick windfall for students.

Maw said the sale would inflate Magdalen’s endowment fund, which it uses to support students and research, from its official £304m valuation last year to “comfortably in excess of £600m”.

That would put Magdalen’s endowment above that of St John’s, historically the richest Oxford college, with assets of £606m according to its latest accounts. However, St John’s wealth is likely to be lifted further by its ongoing development of 64 acres of land to the north of Oxford into offices, laboratories and housing.

Maw, a former investment banker and private equity executive, said the uplift in Magdalen’s endowment would lead to a “very material impact on our ability to support teaching and research”.

But he cautioned it would take some time for the windfall to feed through to students. “We transfer 3.5% of the rolling five-year average of the endowment to support current expenditure so … it will take five years to feed in fully.”

Last year the college topped up the £3.1m it received in tuition fees with £7.8m drawn down from the endowment to meet its £12.1m annual spend on teaching, research and accommodation.

The college, which opened the first stage of the 75-acre science park in 1991, said it would work with Singapore’s sovereign wealth fund GIC to invest £150m developing a further 10 acres into an additional 300,000 sq ft of office and lab space. “It is already clear that we are going to have to build bigger and higher,” Maw said.

The park is already home to more than 100 companies, most of which have been spun out of the university. Two of the firms – Oxford Nanopore, a genome sequencing company that helped analyse Covid-19 variants, and artificial intelligence drugmaker Exscientia – last week floated on the stock market with a combined market value of more than £6bn.

Over coffee and baklava, Richard Simmonds, the chief executive of OrthoSon, a smaller spinout from the Oxford Institute of Biomedical Engineering, explained the benefits of the park to scientists and investors.

“The three challenges for growing companies are funding, recruitment and flexibility of space,” Simmonds said. “Here you have all of that.”

Simmonds said rents at the park were probably about 30% higher than they would be at a nearby business park. “But here you get the buzz of scientists and the university.” He added that if a company within the park does fail, “the talent can get mopped up by other companies around the space pretty quickly”.

“You can see the money pouring in from all over the world to finance the stuff that’s coming out of Oxford,” he said as he gave a guided tour of the park, where the streets and buildings are named after Magdalen’s famous scientific alumni. “You see buildings going up all the time, there’s one over there that wasn’t there when we moved in, and at the other end of the park there are three or four buildings that didn’t exist three years ago.

“The halo of Oxford University’s reputation and brand means you can secure meetings with investors that you might not get if you were spinning out of other British universities.”