Over 70% polling registered in Vellore 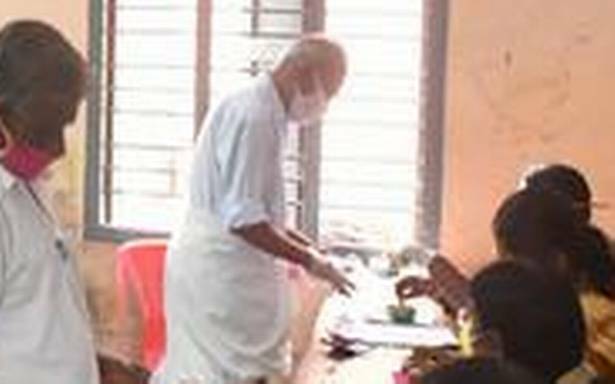 More than 70% of polling was registered in Vellore, Ranipet and Tirupattur in the second phase of the local body election for 2,716 posts on Saturday.

The neighbouring Tiruvannamalai district also had its election for 35 vacant local body posts, polling 78.26%. According to district election officials, this was the poll percentage recorded till 5 p.m.

Vellore district, with 2,57,298 voters, registered a polling percentage of 72.5% . The district had 469 polling booths in Anaicut, Vellore and Kaniyambadi panchayat unions.

The newly-formed Tirupatur district conducted polling for its 631 posts in its two panchayat unions — Madhanur and Alangayam — with 73.48% of votes registered.

Many of the total 1,688 polling booths, including 77 booths in Tiruvannamalai, witnessed a steady flow of voters since 8 a.m., with residents waiting in snaking queues to exercise their franchise.

Meanwhile, a 35-year-old construction worker, S. Venketasan, was stabbed in the polling booth for wards 8 and 9 of Konganallur village panchayat at Anaicut in Vellore on Saturday.

“The incident is not related to polling. Special teams were formed to nab the suspect. Adequate police personnel were deployed in the village to prevent any untoward incidents,” S. Selvakumar, SP (Vellore), told The Hindu. In another incident, residents, mostly tribal people, in Nayakkaneri village on the hillock near Ambur in Tirupatur boycotted the election on Saturday.

They were protesting against the village being reserved for the Schedules Castes category from its earlier General Category, claiming that a majority of people in the village were Scheduled Tribes.