Over 70% of Australia’s aged care workers yet to receive $800 pandemic bonus, poll suggests

More than 70% of aged care workers are yet to receive a single payment through the Morrison government’s pandemic bonus scheme four months after it was announced, staff polling suggests.

The prime minister, Scott Morrison, announced in January up to $800 would be made available to aged care workers through a bonus scheme designed to recognise their efforts in the pandemic and stem the loss of workers from the sector.

The scheme, which pays out a pro rata bonus in two instalments of up to $400, began taking applications in March. The government asked the underfunded aged care sector to stump up the cash for their workers prior to receiving approval, a design critics say has created a barrier to access.

The Australian Nursing and Midwifery Federation polled nurses and aged care workers to monitor receipt of the bonuses among its members. It found 71% have not received any of the two promised bonuses. About one in five workers have received one payment and only 2.7% have received both.

The figures are at odds with government data, which suggests 1,650 applications from employers have been received and 1,300 agreements made to date.

The government estimates grants have been paid to 215,000 workers.

“We have already invested more than $600 million in bonus payments for aged care workers as well a workforce plan to increase staffing, training and career pathways,” a spokesman for aged care minister Richard Colbeck said.

The data comes as a separate report, released on Tuesday by the UTS Ageing Research Collaborative, warns that the sector is struggling to improve staffing levels, despite the enormous “community and political pressure” in the wake of the royal commission.

Just 5% of residential facilities would be able to meet the average minimum staffing standards legislated as a response to the royal commission’s recommendations, the report found, and staffing in residential homes had grown by just 1.9% in 12 months.

The problem was mirrored in home care – a critical sector in relieving pressure on the residential system – where average staffing time has continued to fall, dropping 32% in five years.

Annie Butler, the federal secretary of the ANMF, said the $800 payment was nowhere near what was needed to address the sector’s critical workforce shortages.

She said the fact the government had failed to pay even that inadequate amount to workers was “disgraceful”.

“While acknowledging this small offering, unions warned that the payments remained grossly inadequate,” she said. “Now we discover that not only has the Morrison government failed to take real action to fix the crisis in aged care, it hasn’t even delivered on its promised bonus payment for workers.

“Our members have had enough of this complete lack of regard from the government. It’s simply disgraceful that during these toughest of times, some of our lowest-paid workers have been abandoned.”

The scheme’s design is based on the $393m aged care workforce retention payments made in the early stages of the pandemic.

The government insists the scheme is “demand-driven” and reliant on uptake by providers. Earlier this year, Colbeck said the government was encouraging providers to pay their workers the payment at the time they lodge the application.

Other aged care staff unions – including the Health Services Union and the United Workers Union – have criticised that approach.

“The for-profits, there’s not many of them, I can see they might dip into their profit margin,” HSU secretary Gerard Hayes told the Guardian in March. “But the not-for-profits, I’ve got no idea where they would get the money to facilitate this.

“The reality is this is just a lot of show and not a lot of go.”

Aged care has been a policy area hotly contested by both parties during the election. The Coalition has made a string of commitments since the damning aged care royal commission, including its five-year $19.1bn aged care plan, which includes a major boost to home care including 40,000 new home care packages, more funding for respite services, 7,000 new personal care workers and 48,000 new training places.

Labor has committed to having registered nurses on site 24/7 at every residential aged care facility and will mandate that every resident receives an average of 215 minutes of care per day, as recommended by the royal commission.

It has also pledged to fund and support aged care workers’ case for a 25% pay rise in the Fair Work Commission. The Coalition says it supports the case but has not committed to funding any pay rise.

The aged care sector – through its peak body alliance Australian Aged Care Collaboration – has found both major parties have fallen short on fixing the current gaps in workforce availability and Covid-19 prevention funding.

But the peak group marked the Coalition as having the worst policies of all three major parties. 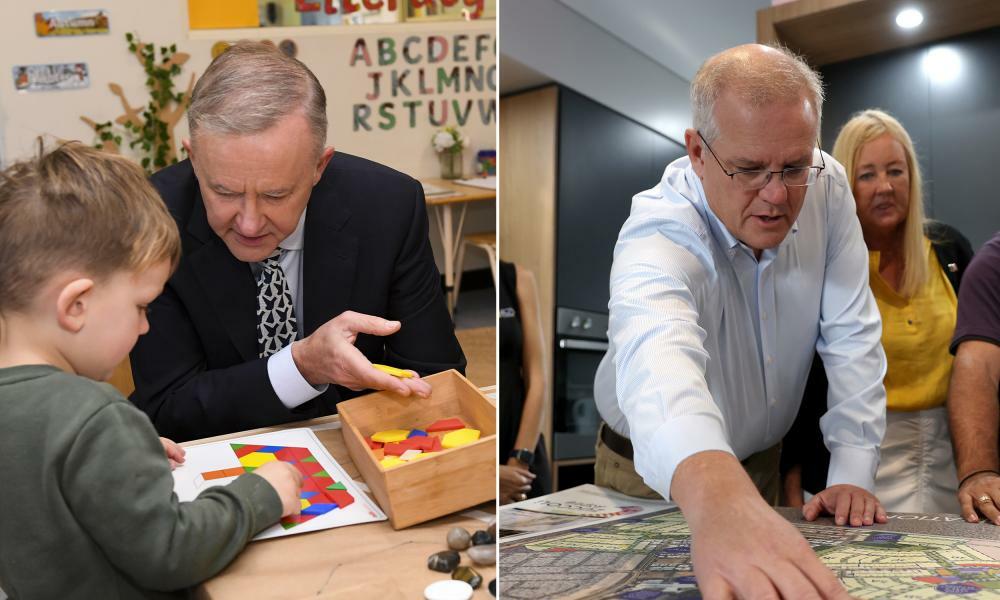 Who should I vote for? Guide to seven key policies in the 2022 Australian federal election where Labor and Coalition differ
Real differences between Scott Morrison and Anthony Albanese have emerged across a range of election policies. To help you decide…

The Guardian - AU
One subscription that gives you access to news from hundreds of sites
Labor's pledge to properly pay women and care workers is a start, but it won't be easy

Aged-care workers are notoriously underpaid for the level of skill, responsibility, and judgement they exercise. Even employers acknowledge it.

The Conversation
Greens push for Future of Work Commission

The federal Greens will push for the establishment of a Future of Work Commission, with a focus on the gig…