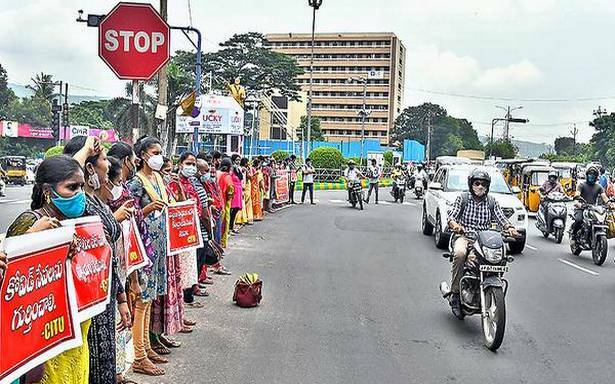 Outsourced employees of Urban Health Centres, who were terminated from service with effect from September 1, formed a human chain, seeking restoration of their services, at the Ambedkar Circle, near the LIC Junction in Visakhapatnam on Wednesday.

The outsourcing employees, on the banner of the Urban Health Centres Outsourcing Employees Union, held banners and raised slogans seeking that the State government should recognise their services, when COVID-19 was at its peak. The union’s State president B. Jyothi Laxmi said that 136 outsourced employees of 26 urban health centres in the district were terminated. Similarly, 1,800 outsourcing employees were terminated from services all over the State.

The move has affected both employees and the common people, who were dependent on the health centres for medical aid. These centres should be reopened and the employees reinstated, she said.

She noted that the terminated employees include some ANMs, who have been working for 20 years and some ANMs, lab technicians, pharmacists, Class IV employees, who were all appointed through e-Vaidya five years ago. At some of the health centres, the employees of ‘104 Service’ were recruited. She recalled that Chief Minister Y.S. Jagan Mohan Reddy, had promised soon after assuming charge that there would be no retrenchment of outsourcing employees but has now gone back on his promise.

Union president K. Manasa said the outsourcing employees, ignored the threat to their own lives, during the second wave, and served COVID patients. She appealed to the government to restore their jobs.

Union honorary president P. Mani and leaders Kusuma and Latha were among those who participated in the protest.