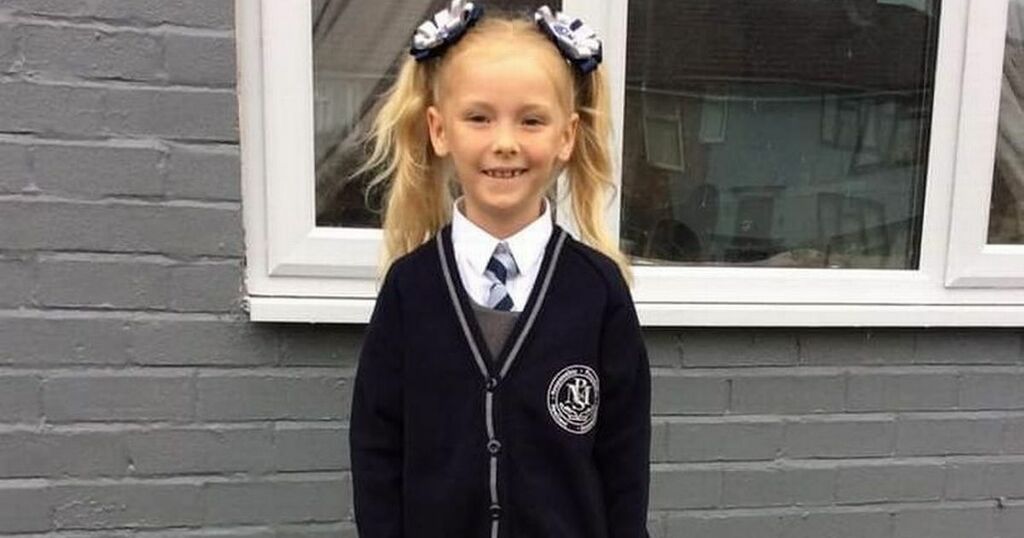 A schoolgirl has been left with life-changing brain injuries after a heavy fireplace collapsed on top of her as she was 'dancing around' her living room.

Alexa-Leigh Blakemore had been playing in the front room of her rented house in Norris Green in Liverpool on September 10 when the accident occurred.

The six-year-old narrowly escaped death after the fireplace came loose and crushed her, fracturing her skull and causing a bleed on the brain.

Her mum, who is now preparing to launch legal action, has claimed the little girl may not be able to have children as a result of devastating injuries that saw her in an induced coma for several days, the Liverpool Echo reports.

Alexa-Leigh was placed under intensive care at Alder Hey Children's Hospital, with mum Elle Williams and dad Kieran Blakemore unsure she would survive.

The couple, who claim they reported loose plaster around the fireplace to their landlord weeks before the incident and are awaiting news as to whether a criminal prosecution will take place, have now initiated civil proceedings.

Elle has expressed frustration with the pace of the investigation by Merseyside Police, but said she hopes justice will be done.

She told the ECHO : "It has been three months now and it seems [a prosecution] is still no closer.

"But our civil case is up and running, our solicitor thinks we have a high likelihood of a substantial settlement, but no amount of money is going to give Alexa-Leigh a normal life.

"She is getting better, she has started talking again although she struggles with some words because she can't put her lips together properly to say certain words like 'mum', but we're hoping that will come back with time.

"She's eating a little bit, but she is still being fed through a peg.

"Her doctor came to see us and he's not been able to tell us until now that there's a possibility she may be able to walk again.

"But we know she's going to have very complex health needs and very specific medical requirements.

"She's been robbed of her normal life."

Other side-effects of Alexa-Leigh's injury include the fact her pupils no longer dilate properly, so bright light hurts her eyes.

The fireplace is also believed to have damaged the structures of her brain responsible for regulating her hormone levels, which Elle said could prevent her having children in the future.

Her mum said: "That will probably affect her later in life."

Parents Elle and Kieran recently appeared on ITV News for a report into substandard housing.

Elle told TV reporters: "It was a freak accident but at the same time it could have been prevented.

"We think she was dancing around and fell and grabbed onto the fireplace. We never ever thought that would happen."

Keiran added: "I'm angry with the landlord." He claims he 'sent her the quote to get it done and it hasn't been done'.

"My daughter's still in critical condition.

"She was a happy, normal little girl and now I'll never see her dance again."

Speaking to the ECHO in September, Kieran explained how the accident happened.

He said: "I was lying on the couch feeding our five-week-old baby and her mum was in the bath.

"Alexa-Leigh was doing her thing like she normally does, running around and playing like the happy little girl she is. I was concentrating on feeding my baby but I could see her out of the corner of my eye.

"This fireplace is like a concrete and marble thing and to move it, I would have to walk it across the floor, but when it happened I have never lifted anything so quick, I moved it like it was a piece of paper.