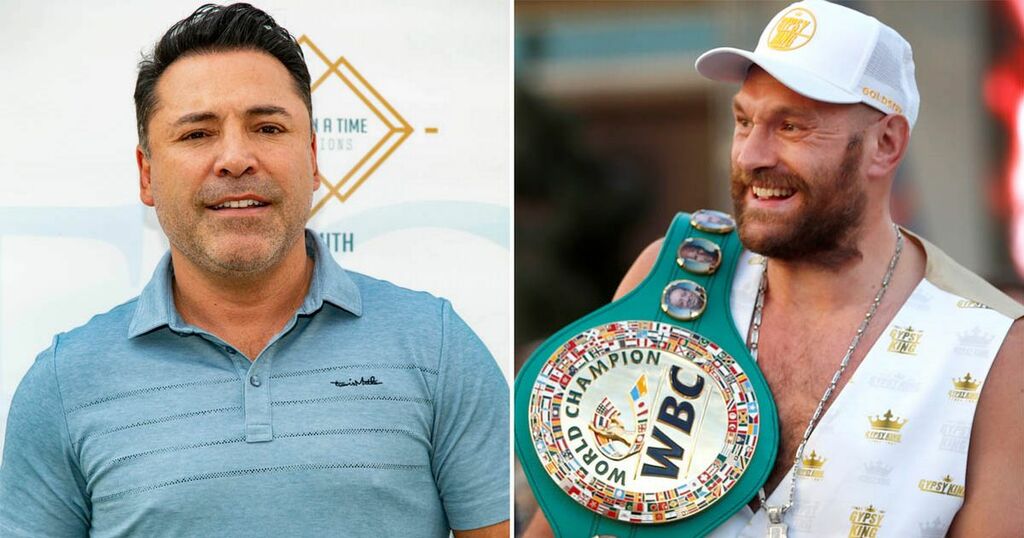 Oscar De La Hoya has rejected claims that Tyson Fury is the best all-time heavyweight after his victory over Deontay Wilder.

The 'Gypsy King' dismantled Wilder in a modern-era classic in Las Vegas last weekend to defend his WBC world title.

But he was forced to recover from a fourth round double-knockdown to take a hard-earned victory over his American foe.

And the former six-weight king has denied calls that Fury is the greatest all-time heavyweight, instead placing Muhammad Ali above him.

"Of all-time? All-time? So, you are disrespecting Muhammad Ali?," De La Hoya told TMZ Sports. "In our era he is actually up there, I agree.

"I thought it was a beautiful fight. I'm happy that Tyson and the Bronze Bomber gave us an amazing performance.

"I promoted the Bronze Bomber for 40 fights, and he always had a heart. So, I'm glad that they gave us a beautiful fight."

Fury remained unbeaten with his latest victory, and ended the trilogy in explosive style in the eleventh round.

His booming right hand e nded a real epic under the lights in Sin City, and put to bed a rivalry of over two years.

And Fury himself has labelled himself one of the sport's greats having now dismissed two of the modern-era's best in Wladimir Klitschko and Wilder.

He may now face a test against domestic rival Dillian Whyte on home soil later this year.

The 'Body Snatcher' was declared mandatory challenger for the next fight against the 'Gypsy King' but must first progress beyond Otto Wallin.

And Whyte, 33, has made demands that the WBC take stricter measures to impose the challenge this time after his long wait.

"Fury has the belt. Wilder had the chance to fight me for three years but didn't," Whyte told Sky Sports News.

"Hopefully now the WBC forces my position and Fury has no choice. It's a massive British fight, a major fight for Britain.

Where does Fury rank in your all-time heavyweight list? Let us know in the comments section below.

"Wallin is a dangerous operator - he pushed Fury all the way. I am looking to fight Fury next if everything goes according to plan.

"I'm always up against it, I'm always in hard fights. I'm used to it. I could pull out of the Wallin fight just to fight Fury but that isn't my mindset. I can't wait around for what Fury is doing.

"Fury is an unpredictable man who might say: 'I am done!' I hope we can make a fight when I get past Wallin. But Fury is a difficult guy to plan. I haven't heard a word from him about making a fight."

The 33-year-old champion has now returned home from the UK, after partying in Las Vegas with wife Paris to celebrate his victory.

And after a disruptive training camp, Fury can now spend some time with his family and newborn child Athena, after her illness in hospital.

With his family life firmly in the spotlight, Fury has faced a call from Carl Froch who believes he could retire.

But the heavyweight champion looks like he may fulfil his five-fight shortlist before the end of his career yet.