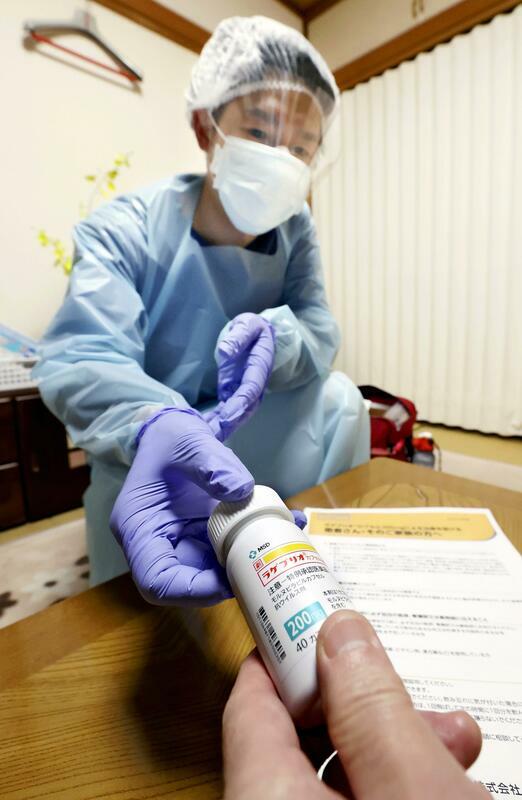 Dr. Koji Maruyama finished his examination of a 71-year-old man before showing him a small medicine bottle.

"This is a recently developed oral drug," Maruyama said during a house call to the man's home in Shinjuku Ward, Tokyo, late Sunday evening. "It helps inhibit the virus' ability to multiply."

The drug, whose generic name is molnupiravir, is the first oral medication distributed to COVID-19 patients in Japan after it was granted special approval by the government at the end of 2021.

The patient started running a fever of more than 38 C between Saturday evening and Sunday morning. He worried that he might have caught the coronavirus, but it was difficult to arrange an appointment with his family doctor over the three-day weekend.

A family member searched online and found Call Doctor, a Tokyo-based company offering house calls. Maruyama visited the patient's home and conducted a test that confirmed the man had contracted the novel coronavirus.

Maruyama, 33, determined the man showed no signs that he would soon develop serious symptoms. Even so, the man's age was a cause for concern.

As molnupiravir should be administered within five days of the start of symptoms, the patient met this requirement.

Maruyama explained the benefits of molnupiravir and points to keep in mind. The patient then decided to start taking the medication.

According to Maruyama, molnupiravir could be helpful if used effectively.

"It hinges on whether patients who need this drug can get it at the early stage of their illness," Maruyama said.

Though he is "grateful to have another treatment option," Maruyama also feels that administering the drug within five days of symptoms appearing is difficult.

Molnupiravir becomes less effective at suppressing the coronavirus after the virus has replicated several times over. Clinical trials offered no data indicating the drug was effective if administered six days or more after symptoms showed. Consequently, patients are supposed to start taking molnupiravir within five days.

A person with mild symptoms, however, might not even notice they have caught the virus, so they might not see a doctor until some time has passed. Many people infected with the omicron variant of the coronavirus in particular have been asymptomatic or had only minor symptoms.

"If the omicron variant spreads even more widely across Japan, many patients might come to us too late to use this drug," said Yasutaka Mizuno, head of the Global Healthcare Clinic in Chiyoda Ward, Tokyo, which has treated many coronavirus patients. "Even if they get checked after several days have passed, we can't prescribe that medication for them."

Unlike more common medications, the Japanese government currently does not widely distribute molnupiravir.

U.S. pharmaceutical giant Merck & Co. developed molnupiravir, which is being manufactured and sold in Japan by Japanese subsidiary MSD K.K. The Japanese government has signed a contract to buy 1.6 million courses of the drug, and had received enough for 200,000 people by the end of 2021. To ensure a stable supply, the government provides molnupiravir for free to medical institutions and pharmacies that request the drug for patients who require it.

Medical facilities and pharmacies that receive molnupiravir must register with an MSD center entrusted by the Health, Labor and Welfare Ministry to supply the drug. As of Wednesday, about 20,000 entities had registered. After receiving an order, the center supplies the required amount of the drug in accordance with the number of patients and other factors. As a result, each medical institute and pharmacy does not have a large stock of molnupiravir on hand.

A patient seen by a doctor at a medical facility with molnupiravir available could receive the drug then and there. But when supplies are not on hand, the facility must either send a prescription by fax or other means to a pharmacy and have the molnupiravir delivered to the patient's home or other location, or order the drug through the MSD center. If this medication does not arrive until the following day or later, the chance to administer the drug before it becomes less effective could be squandered.

Since the start of this year, the Fujimino Emergency Hospital in the town of Miyoshi, Saitama Prefecture, has treated about 300 coronavirus patients.

"As things stand, we don't have any molnupiravir in stock, so every time a patient tests positive we have to order the medication, which takes time," said Akira Kano, head of the hospital. "I'd like a more efficient supply system put in place, so we can keep at least some doses on hand here."

It is is also crucial to prioritize the administration of molnupiravir to patients at high risk of becoming seriously ill if they catch the novel coronavirus.

Molnupiravir reportedly reduces the risk of death or necessity of treatment in a hospital by 30%. The drug is available to patients 18 and older. Elderly people and those who are overweight or have diseases such as diabetes are said to be more vulnerable to becoming seriously unwell, so appropriately providing these patients with the drug at an early stage will be necessary.

The names and other details of medical facilities and pharmacies that are registered with the MSD center and receive supplies of molnupiravir have generally not been made public, however. In this situation, a patient is unable to search for a facility that has the drug available and get a medical check there.

Yoshiyuki Majima, president of support organization Pancreatic Cancer Action Network Japan, is calling for such information to be made publicly available.

"Cancer patients worry that they could become very sick if they get infected with the coronavirus," Majima said. "These patients want to use this oral medication one day or even half a day faster than they are able to now, so the names of medical facilities with this drug in stock should be made public."