Opinion: What Steve from Blue's Clues meant to me 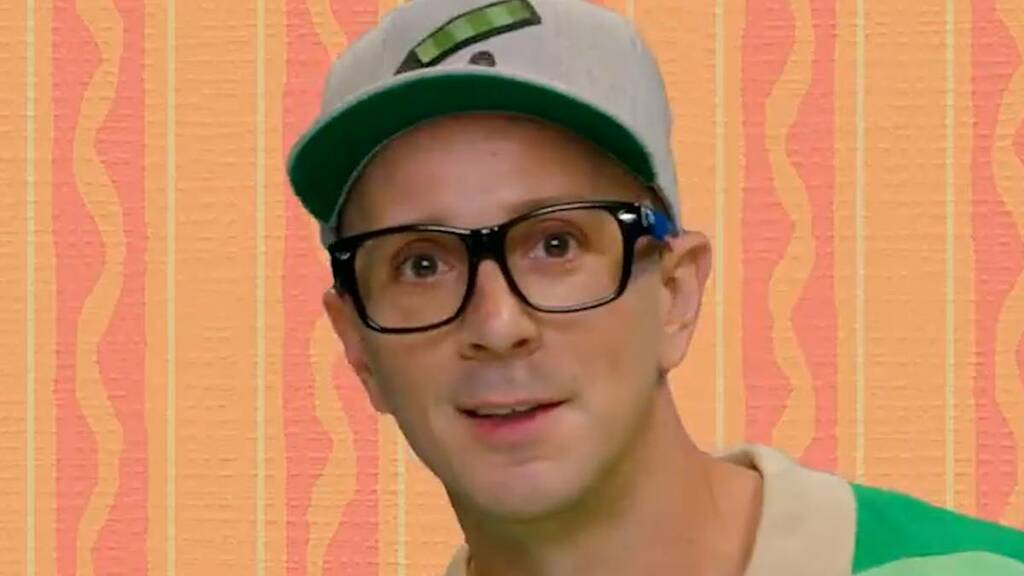 If you're like me, you never fully processed the trauma of saying goodbye to Steve from Blue's Clues.

Then last night my mum tagged me and my sisters in a video on Instagram. It was a clip of a very familiar face - glasses, green striped shirt and wallpaper in the background that I'd recognise anywhere.

"Hi, you got a second?" It was Steve from Blue's Clues, back with a message for fans on the 25th anniversary of the show.

I immediately felt like I'd entered a time travel machine and gone back to my childhood.

"You remember how when we were younger, we used to run around and hang out with Blue and find clues and talk to Mr Salt and freak out about the mail and do all the fun stuff?" Steve said.

In that moment, I just wanted to be 4 years old again sitting on the floor in front of the boxy old TV in my parents' house next to my little sister with a Tupperware bowl of snacks on my lap, watching Blue's Clues.

Countless Kiwi kids of the early 2000s will tell you they were Blue's Clues' biggest fan, but I'd like to think it was me. I watched it religiously during my morning programmes, before Netflix was a thing, when you had to patiently wait until an ad break to run to the bathroom.

I had the original Blue's Clues playset with the plastic house that opened up, with the Thinking Chair, Slippery Soap (whom I affectionately referred to as Slippery Slope), Mr Pepper and Mrs Salt, Blue, and Steve with his notebook and crayon.

Every time I checked the mailbox at home (and still to this day, when I go to the mailroom at my office), I want to wail "MAAAAAAAAIIIIL."

"And then one day, I was like, 'Oh hey, guess what? Big news, I'm leaving. Here's my brother Joe, he's your new best friend', and then I got on a bus and I left and we didn't see each other for like a really long time? Can we just talk about that? Because I realise that was kind of abrupt," Steve said in the clip.

Abrupt is an understatement. Steve, we still haven't recovered. Never mind all those conspiracies about your death, which turned out to be greatly exaggerated once you resurfaced on Instagram.

"And then look at you, and look at all you have done, and all you have accomplished in all that time. And it's just, it's just so amazing, right?

"I mean, we started out with clues, and now, it's what? Student loans and jobs and families? And some of it has been kind of hard, you know? I know you know.

"I guess I just wanted to say that after all these years, I never forgot you. Ever. And I'm super glad we're still friends."

I'll admit I teared up watching that clip, but I can't be the only one.

Some things you watch or read or listen to as a kid just stay with you for years. You associate them with things like familiarity, comfort, safety, things to hold on to.

They help shape you in ways you don't realise until years later. I'm not convinced it wasn't looking for clues with Steve with my own notepad and crayon in hand that inspired me to become a writer.

I guess what I'm trying to say is that amid everything we've gone through over the past few years, it's memories like these that remind us of what's really important.

At the moment, I'm stuck in Auckland in level 4 lockdown. I'm content and safe and among friends, but I don't know when I'll be able to travel to see my family again.

I miss them a lot - but seeing that blast from the past somehow made me miss them all the more.

And it made me miss simpler times - when we didn't have to worry about the pandemic, about the economy, about jobs, about the state of the world, when you could run around barefoot in your backyard before escaping into the world of your favourite TV show until you were called for dinner.

Yes, I'm a 23-year-old woman and yes, it's just a kids' TV show, but it will always mean something to me and to countless noughties kids around the world - and that's pretty special.

"You look great by the way," Steve concluded. "Whatever it is you're doing, it's working."

Thanks, Steve - for everything.