The Future of the West Is in Question

Russia’s invasion of Ukraine surely heralded the end of an era of illusions. The subsequent criminal actions of the Russian army — the massacre of civilians in Bucha, Borodyanka, Mariupol and Irpin — have proven that post-Soviet Russia is not the country the West had imagined. A confluence of old-fashioned nationalism, imperialism and colonialism supercharged by hyper-modern propaganda tools: This is the image of a 21st-century totalitarian state. It is the true face of Vladimir Putin’s Russia, and one must be a cynic not to recognize it. And yet, just diagnosing the disease is not a cure. It is not enough for us to discard our illusions regarding Russia, we must also cast off the illusions toward ourselves.

More than 120 days have passed since the beginning of the war. Ukraine and its military can be proud of the steadfast resistance they have put up against one of the supposedly most powerful armies in the world. On Feb. 24, no one gave the Ukrainians a chance of more than several days of survival. Meanwhile, they not only defended Kyiv, but pushed back the enemy far to the east.

However, only now have we reached the critical point of this conflict. Many assumed that Putin’s aim was a blitzkrieg and the seizure of all Ukraine. Russia’s enormous potential notwithstanding, taking control of a country as large as Ukraine, with more than 40 million inhabitants, would always be a nearly impossible task. However, Russia’s main objective remains not only that of paralyzing Ukraine but of further destabilizing the West. And despite the successes of Ukrainian troops, Russia is moving forward with its central goal, destroying industry, roads and schools along the way. While Ukraine has surpassed expectations to fend off Russia for this long, unless the U.S. and Europe intervene more forcefully, a protracted war could mean not only Ukraine’s downfall but — in the long term — the rise of a new global hegemony, which will be able to marginalize the Western world.

Ukrainian President Volodymyr Zelenskyy recently said Russia occupies 20 percent of Ukraine’s territory. The scale of Putin’s bloody land grab is as if the U.S. were deprived of Texas, California, Montana, Arizona, Oklahoma and New Jersey. Russia is like a python, which seizes its prey and waits until it is weak enough so that it can swallow it whole. Procrastination and passivity will play in favor of the invader. That is why it is so important the West stop deluding ourselves that the support we have thus far provided for the Ukrainian army is sufficient.

The latest intelligence reports confirm that the Russians are strengthening their presence in the occupied territories of Kherson and Zaporizhia. They are not only increasing the numbers of their troops but also exploiting moments of Ukrainian fatigue to build fortifications that will prevent an effective counter-offensive. Ukraine is trapped. The normal functioning of the economy is largely impossible today, and Russia is crippling grain and food exports.

This is no longer a local conflict. Around the world, food market deficits, especially those that may occur in Africa and the Middle East, are catalysts of yet another migration crisis. This is exactly what Putin wants. Russia’s actions already have global consequences in the form of Putin-flation. And the further effects are difficult to even estimate.

Egypt, Algeria, Libya, Pakistan, Tunisia, Morocco and countries of the Sahel are among the indirect victims of this war and the resulting food crisis. None of these are oases of peace. Each of them could easily fall into the orbit of stronger Russian influence.

And as for the elephant in the room, China — the largest importer of food from Ukraine — certainly, the war in Ukraine will not deal a blow to its economic position. It may, however, be an incentive to become more active in taking over global assets. The “Chinese Dragon” could seize this opportunity to make a giant leap forward.

The geopolitical passivity of the Western world carries the risk of its marginalization. History teaches that prolonged conflicts bleed both sides, but dictatorships have an advantage over democracies. They are not accountable to their societies and can pay the price of blood, even with opposition from their citizens. We should not forget the lessons of Afghanistan and Vietnam: Both of these tragic clashes proved that a lack of decisiveness and an entanglement in many years of guerrilla warfare ultimately bring only losses. But those failures did not lead to the rapid decay of the global world order for one reason only: There were no candidates for a new hegemon.

Now everything is different. A defeat of Ukraine will have more far-reaching consequences than the chaotic withdrawal from Afghanistan or the defeat in Vietnam. If Ukraine falls, the foundations on which we have built our plans for the future will also collapse.

The U.S. and Europe may be replaced by China — or China in tandem with Russia. We will find ourselves in a completely new chapter of world history, one that could be written in extremely bloody verses. There are increasing signs that the lack of decisive measures against Russia may be critical for Taiwan. China sees Russia’s relative weakness and, at the same time, it sees how much weaker the West is if it cannot stop a declining empire.

The war in Ukraine puts before us one crucial question: Does the transatlantic free world still want to occupy a position of leadership? Do we still believe in the universality of values such as freedom and the right of national self-determination? Do we have determination to defend them? If not, we have already lost our future. However, if the flame that has enlivened our civilization for centuries is still smoldering, it is high time we rekindled it and did everything in our power to save Ukraine. 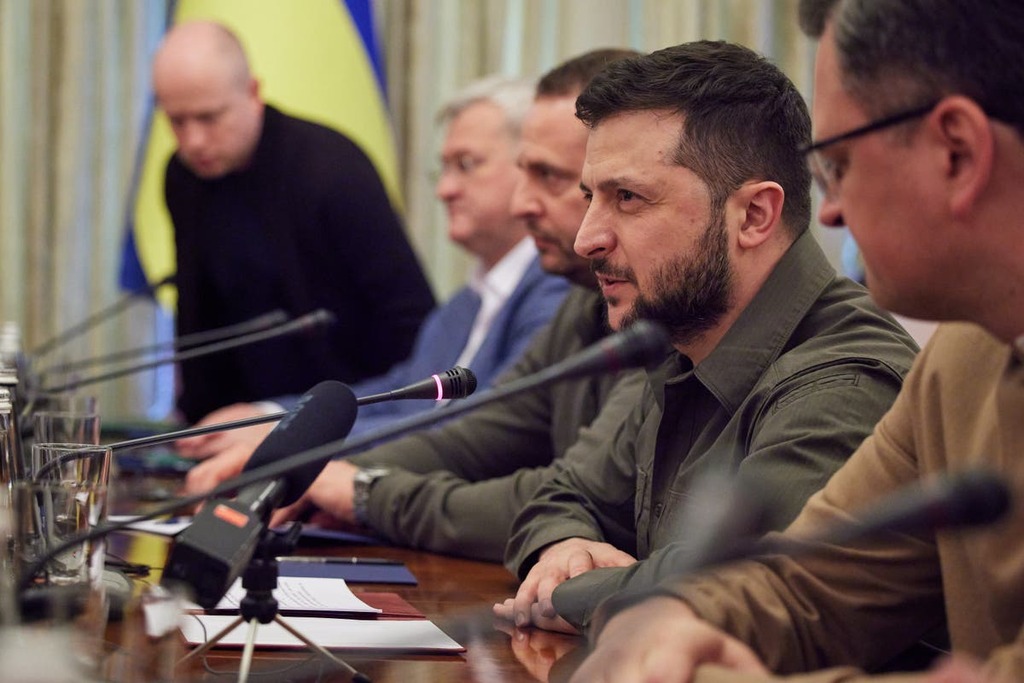 ‘We are outgunned and outnumbered by Russia’ – Ukrainian politician
Oleksandr Merezhko made an appeal for heavy weaponry to allow his country to defend itself.

The Independent UK
One subscription that gives you access to news from hundreds of sites
Ukraine latest updates: Battle for Lysychansk city grinds on