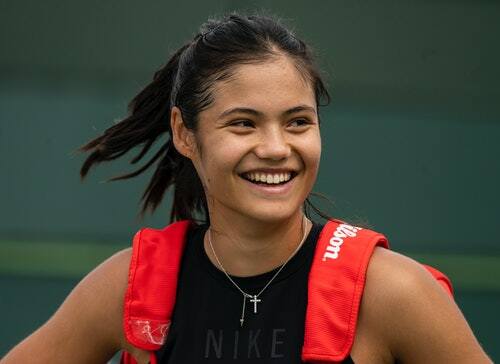 Following her triumph in the recent U.S. Open tennis tournament, Emma Raducanu was interviewed by Chinese media outlet CGTN and revealed that math was her favorite subject at school. Raducanu told the interviewer she was “a numbers person” and really enjoyed the problem-solving aspect.

The tennis player, who recently received an A* grade at A-level, said she loved working on math puzzles which, she said, gave her the thrill to solve.

Her passion for math follows in the footsteps of Britain’s last U.S. Open winner in the women’s singles, Virginia Wade. Wade is also a keen mathematician, picking up a math degree from the University of Sussex in 1966. This coincidence may spark questions about whether the mathematical ability is useful for elite sportspeople, especially in tennis.

Sports and math are very different activities, but some aspects of the mindset required to be successful in math or sports can certainly help you to achieve success in the other.

Let’s consider the hard skills that we may associate with both math and tennis. Hard skills can be thought of as the technical, physical, or knowledge expertise that we bring to a given task. In this case, we may think of mathematicians (as well as physicists) as being good with angles or able to understand how spin may affect a tennis ball.

This often is the case, but calculating angles or how a tennis ball may spin or bounce on different court types while in the comfort of a classroom or office is quite a different beast from the split-second decisions that tennis players have to make about angle and spin as the ball comes hurtling towards them at speeds of over 100 mph.

There are certainly interesting aspects in a game of tennis for mathematicians to study, and it is important for players to understand how spin and bounce may be affected in different conditions. But the way in which the mathematician and tennis player go about their work here is very different, and the crossover of skills seems minimal in this sense.

Instead, we may wish to think about the soft skills that studying math may provide us with. Soft skills are harder to define but loosely relate to personality traits such as creativity, communication, leadership, and mentality that contribute to our success.

They are also an increasingly important part of the higher education curriculum, in mathematics and beyond, as educators try to prepare students for the job market after their degree.

Problem-solving is listed in almost every list of soft skills, be that from the job market or in education literature, and is the most obvious connection between math and tennis. Math is essentially a series of problems that mathematicians try to solve, and this can help with our problem-solving skills in life.

This could be simple arithmetic at a young age, going all the way up to the Millennium Prize Problems that the very best modern mathematicians are desperately trying to solve in order to claim a $1 million prize.

In tennis, problem-solving truly is a buzz phrase and there are countless interviews with players, such as this example from the recent US Open, in which players discuss their efforts in trying to solve the problem or puzzle set by their opponent. Raducanu even mentions it herself in the CGTN interview. This is not just limited to tennis though, almost all sports contain a problem-solving aspect, as shown in this research highlighting examples in combat sports and rugby.

This is the big one. In math this has been defined as a stance “that enables pupils to continue learning despite finding setbacks”. At almost any level in math, we will eventually come across a problem that we struggle to solve or get wrong first time. The ability to persevere and try new techniques and to not simply give up is fundamental in becoming a successful mathematician.

This is a huge issue on a global scale, with studies on Welsh A-Level students and Indonesian high school students providing just two of many examples from 2021 alone of research looking to further understand how to develop resilience among math students. From a sporting perspective, developing resilience and understanding what affects resilience among athletes is also a major area of current research interest.

In this sense, Radacanu has truly excelled. Winning the US Open in the aftermath of her early exit in her first Wimbledon tournament and the subsequent criticism that came her way showed a level of resilience that is far beyond the capabilities of almost all of us.

Previous research has suggested that early achievements in physical activity and mathematics are related at a young age. The evidence given above of how problem-solving and resilience are vital to both higher level mathematics and professional sports indicates that this relationship continues to some extent as we get older.

These crossover skills have brought Raducanu success in both fields. She does not just possess the ability to problem-solve and the resilience to overcome adversity, she has honed those skills to an incredibly high level. Raducanu may have the ingredients needed to become a great mathematician (although we may never know), but she also has so much more than that.

Physical fitness, a strong work ethic, and the ability to make decisions within a second or two of her opponent making their play put her skill set on a completely different level to a mere mathematician like this author. Being good at math has not made her a great tennis player, but it’s possible that some of the skills she has learned through math have helped her along, in small ways.

This article was originally published on The Conversation by Laurence Shaw at Nottingham Trent University. Read the original article here.