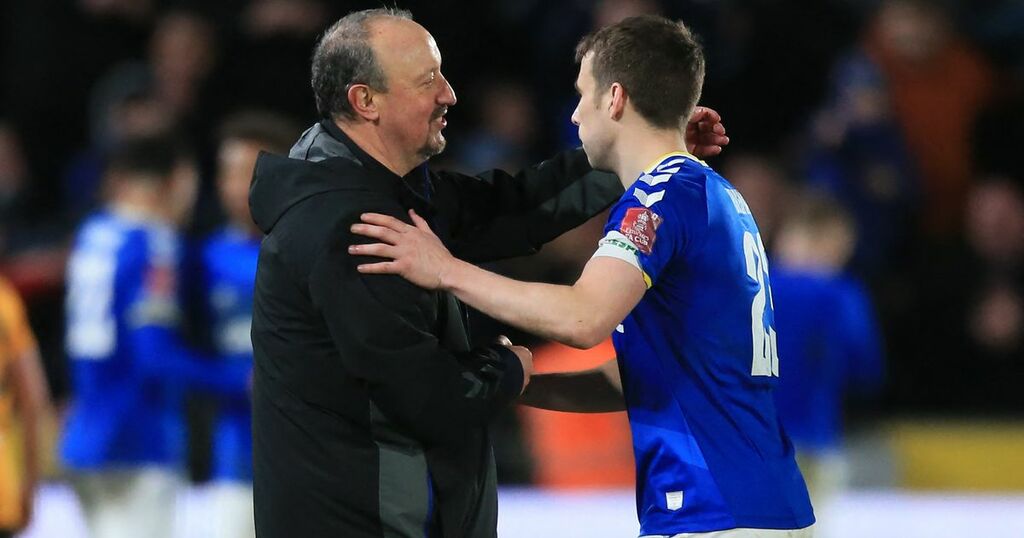 Everton were made to fight for their place in the fourth round of the FA Cup after battling back from being a goal down against Hull City to progress.

Rafa Benitez's side conceded from a set-piece within the opening minute of the match but hit back with goals from Demarai Gray and Andre Gomes before the break.

There was nothing to separate the teams at the full-time whistle, after Hull equalised, which would ordinarily have resulted in a third-round replay.

But, with different rules in place this campaign due to COVID-19, extra-time followed.

And Andros Townsend stepped up for the Blues with a curling effort from outside the box to win the tie, keeping the club's dreams of silverware for the 2021/22 campaign alive.

Here is how the national media reacted to Everton's triumph.

'The frailties that have haunted Benitez and his side remain'

Aaron Bower of the Guardian wrote:

"There was a moment, seconds before Demarai Gray’s equaliser which jolted Everton to life in this dramatic FA Cup tie, when Rafa Benítez may have begun to wonder if the size of the task facing him was greater than even he had envisaged.

"His side were being firmly tested by Hull City, were already a goal behind and looked in real danger of falling further adrift. The pressure was intensifying, underlined by chants and banners from the travelling supporters aimed towards the club’s Spanish manager.

"Benítez’s last visit to Hull was in May 2010, when a 0-0 draw proved to be his final match in charge of Liverpool. Anything other than victory here and talk of the same outcome in his spell as Everton manager would have intensified.

"In the end, while his side made hard work of this and were rescued by a long-range strike from Andros Townsend in extra-time, it was job done, with Everton progressing to the fourth round of the FA Cup.

"However there is little doubt that the frailties that have haunted Benítez and his side so often this season remain."

*Rate the Everton players in the FA Cup win:

Michael Beardmore of the BBC wrote:

"Begovic was twice called on to thwart tall striker Eaves, the first from a powerful header and the second a shot from a tight angle, and the visitors looked all at sea at set-pieces.

"But then Anthony Gordon and Gray weaved their magic, a classy exchange of passes in the Hull area culminating in the former Leicester man calmly tucking beneath Hull keeper Nathan Baxter.

"Gordon has been one of Benitez's bright sparks recently and he was at the centre of everything good Everton produced in the first half, clipping the outside of the post after a mazy run and setting Michael Keane clear for a shot superbly tipped aside by Baxter.

"The 20-year-old played a role in Everton's second too, teeing up Jonjoe Kenny for a cross that Gomes, timing his run into the six-yard area perfectly, dived in to head home.

"It was a blow that appeared to rock Hull and the game looked to be meandering towards a routine Everton win when Longman found Begovic's top corner from 20 yards just seven minutes after coming on."

*Vote for your Everton man of the match in FA Cup win:

'The knives were out for Rafa Benitez'

"Everton always seem to be one defeat from crisis but it didn't happen yesterday thanks to a spirited comeback and magical winner from Andros Townsend.

"The knives were out for Rafa Benitez after Championship Hull took the lead through Tyler Roberts after just 43 seconds with the travelling Bluenoses chanting for their manager to be sacked and a banner that read: 'Get out of our club'.

"But in adversity, the players got their boss out of a big hole. Demarai Gray levelled and Andre Gomes scored his first goal in almost three years to put Everton ahead. They weren't to be denied even after a Hull equaliser from Ryan Longman took the match into extra-time."

'The look on his face was relief rather than elation'

"It needed Andros Townsend to return from injury and come off the bench and rescue Everton at the MKM Stadium, but this was hardly the morale-boosting victory to ease the pressure off Rafa Benitez.

"At the final whistle Benitez, dressed in a tracksuit and splash-jacket rather than his customary suit, removed his glasses and the look on his face was relief rather than elation.

"His players had recovered from conceding in the first minute to Tyler Smith, then looked in control of the tie but were taken to extra-time after an equaliser by Ryan Longman. Hull sensed an FA Cup upset until Townsend’s stunning winner after coming off the bench from a month out with a cracked bone in his foot.

"Benitez does not need reminding that his last match before his Liverpool dismissal in 2010 was at Hull’s stadium back in 2010. Farhad Moshiri, Everton’s owner, is determined for his manager to be a success at Goodison but, despite the eventual victory, there were worrying signs."