On This Day: US, Israel announce plans to quit UNESCO 4 years ago 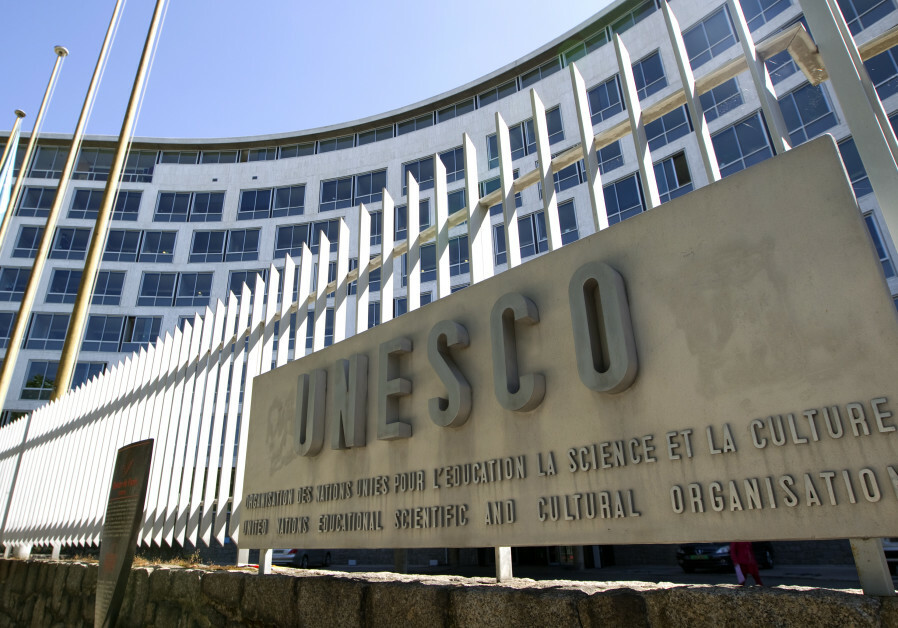 October 12, 2021 marks four years since the US and Israel announced that they would withdraw from the United Nations Educational, Scientific and Cultural Organization (UNESCO) over what they claimed was overt anti-Israel bias.

At the time, then US ambassador to the UN Nikki Haley cited “outrageous and politically based decisions” made by the UN body to consider Hebron and the Tomb of the Patriarchs as Palestinian territory and not Jewish sites. That decision had been met with widespread outrage in Israel, with then-prime minister Benjamin Netanyahu calling it “delirious” and Israel's then-ambassador to UNESCO Carmel Shama Hacohen taking out his phone in response to the vote and saying “Mr. Chairman. It’s my plumber in my apartment in Paris. There is a huge problem in my toilet and it is much more important than the decision you just adopted.”

“The purpose of UNESCO is a good one. Unfortunately, its extreme politicization has become a chronic embarrassment,” she said in a statement at the time.

“The Tomb of the Patriarchs decision was just the latest in a long line of foolish actions, which includes keeping Syrian dictator Bashar Assad on a UNESCO human rights committee even after his murderous crackdown on peaceful protestors. Just as we said in 1984 when president [Ronald] Reagan withdrew from UNESCO, US taxpayers should no longer be on the hook to pay for policies that are hostile to our values and make a mockery of justice and common sense.”

On October 12, 2017, the State Department officially notified UNESCO of their plans to withdraw. In a statement, then-spokesperson Heather Nauert noted that “This decision was not taken lightly, and reflects US concerns with mounting arrears at UNESCO, the need for fundamental reform in the organization, and continuing anti-Israel bias at UNESCO.”

Netanyahu praised the move, calling it a “brave and moral decision, because UNESCO has become the theater of the absurd and because instead of preserving history, it distorts it.”

UNESCO's then-director-general Irina Bokova, however, was not similarly enthusiastic, expressing “profound regret” at the move.

“At the time when the fight against violent extremism calls for renewed investment in education, in dialogue among cultures to prevent hatred, it is deeply regrettable that the United States should withdraw from the United Nations agency leading these issues,” she said in a statement.

“At the time when conflicts continue to tear apart societies across the world, it is deeply regrettable for the United States to withdraw from the United Nations agency promoting education for peace and protecting culture under attack.

The US decision also came as Qatar’s Hamad bin Abdulaziz al-Kawari, who has been accused of antisemitism by Jewish and Israeli groups, seemed by many to be poised to become the next UNESCO director-general.

However, the vote to become director-general was ultimately won by Audrey Azoulay, France's former culture minister and a Jewish woman, who achieved a landslide victory. This did not change Israel's mind, however, and she expressed her regret at the Jewish state's departure from the organization.

It should be noted, though, that the vote regarding Hebron and the possible election of Kawari were only two incidents in a list of grievances Israel and the US had with the UN body. For example, UNESCO’s Executive Board in 2016 passed two resolutions ignoring Jewish ties to the Temple Mount and one in 2017 that disavowed Israel’s sovereignty in Jerusalem.

The move to withdraw from the organization is seen by some today as not only a protest for UNESCO's allegedly anti-Israel views, but also part of the isolationist tendencies of the Trump administration in the US and the will of Netanyahu in Israel to follow his lead.

But with President Joe Biden now in the White House, many wonder if the US will make a return to the organization and if Israel will follow suit.

Another issue to consider, though, is the power gap left by the US withdrawal. In leaving UNESCO, the US has opened the door for greater influence from China.

As noted by Georgetown University's Berkley Center for Religion, Peace & World Affairs, China now has the second-highest number of UNESCO World Heritage sites and is eager to increase its influence in the organization. Further, according to Axios, Beijing may even want to push for some of UNESCO's departments to relocate over to Shanghai.

Regardless, UNESCO would certainly appreciate an American return.

The body has had to fill a gaping financial hole. The United States left with $542 million in arrears. By 2017, UNESCO's budget of about $300 million was half of its 2012 budget, meaning it was forced to freeze hiring, cut programs and fill gaps with voluntary contributions.

UNESCO says the budget from member states is now $534.6 million, with a further $189 million coming from extra voluntary budgetary contributions.

A US return, done through a letter informing the body, would also mean that Washington would repay its arrears at some stage.

But things may prove complicated given a US law that forbids the United States from funding UN bodies that have admitted Palestine as a full member, although a waiver can be sought.

In late July 2021, Axios reported that Prime Minister Naftali Bennett's government was reportedly weighing a possible return to UNESCO as well. However, as of now, neither the US nor Israel have made any moves to do so, and time will tell if they ever will.