Olympic outgun Warners Bay, Azzurri too good for Rosebud in round 10 of NPLW NNSW

Jemma House proved pivotal as Newcastle Olympic powered into fifth place with a 4-2 win over leaders Warners Bay while Adamstown slipped to sixth after losing 3-1 to Charlestown in an intriguing weekend of NPLW Northern NSW.

It was the second big win for Olympic in as many outings and sent a clear warning to the competition that the 2020 premiers and champions had put a sluggish start to the season behind them.

The visitors took a 2-0 lead at John Street Oval on Saturday night through House and Georgia Little before the league's leading scorer Adriana Konjarski pulled one back for the hosts in the 38th minute.

House set up Olympic's third goal, scored by Jade McAtamney in the 57th minute, with a cross into the box before cleverly chipping Panthers goalkeeper Ally Boertje from range in the 60th. Warners Bay's Elodie Dagg produced a long-range effort of her own in the 84th to make the scoreline more respectable.

It was the Jets striker's first start and only second appearance of the season due to injury.

House broke the deadlock in the 28th by pressuring the Panthers' defence into coughing up the ball then easily slotted past Boertje.

Little headed into the net in the 36th minute when Boertje spilled a cross from the right after House had put Georgia Amess in space out wide.

Olympic coach Paul DeVitis described it as "a great win against a great team".

"The self-belief has been there and it was never panic stations with the start of the season," DeVitis said.

"It never crossed my mind that we weren't good enough to pick up big wins. The last month has been a big turning point for us and it's really important now, the next two or three weeks, we need to solidify that momentum.

"Performance-wise, I thought in the first 30 minutes we were fantastic and some of our best football all year. We've been working on pressuring the ball carrier a lot. [House] leads that pressure from the front. She's just got that bit of explosiveness that you need. But all the players around her were fantastic and she did her job, which was to score goals."

The win came after Olympic had disposed of top-four side Maitland 5-2 one week earlier and with some key players out. Striker Keea Parrish and industrious midfielder Laura Hall were unavailable. Goalkeeper Natalie Wiseman and attacking player Chloe Hinde were out through injury.

The result propelled Olympic to 12 points as they eye last-placed New Lambton next weekend before back-to-back clashes with seventh-placed Mid Coast.

Charlestown improved to 16 points and third place with their victory at Lake Macquarie Regional Football Facility on Saturday night.

Azzurri set up the win with a strong start. They led 2-0 with the game not yet 10 minutes old after Summer Taube scored in the third minute then Courtney Anderson in the ninth.

Jayna Fraser, who plays for Oakland in the United States College system and was a temporary signing by Azzurri while in Newcastle on break, found the back of the net in the 27th minute.

Josie Morley kept Rosebud in the game when she scored with a well-timed header from a corner in the 29th.

Coach Niko Papaspiropoulos said it was an important result as they put six points between themselves and Adamstown (10).

"We weathered a bit of a storm in the second half," Papaspiropoulos said.

"It wasn't our prettiest game or our best game in terms of controlling the ball at all times. But we hurt them and it's taking your chances. We took them early and gave ourselves a good lead and we were desperate enough to make sure we got the win.

"It's a big win. It's almost like we've been playing gatekeeper the last two weeks. Fending off teams from the top four. Now it's about maintaining momentum and the points will come if you're getting the wins."

The match between Maitland (15) and Broadmeadow scheduled to be played at Cooks Square Park on Sunday was postponed due to a wet ground. Magic are level with the Panthers on 19 points but second in the standings due to goal difference.

Mid Coast (6) recorded their first points of the season with back-to-back wins over last-placed New Lambton (0) over the weekend. Mid Coast won 3-1 in a rescheduled round-three game in Taree on Saturday then 3-0 at Alder Park on Sunday. 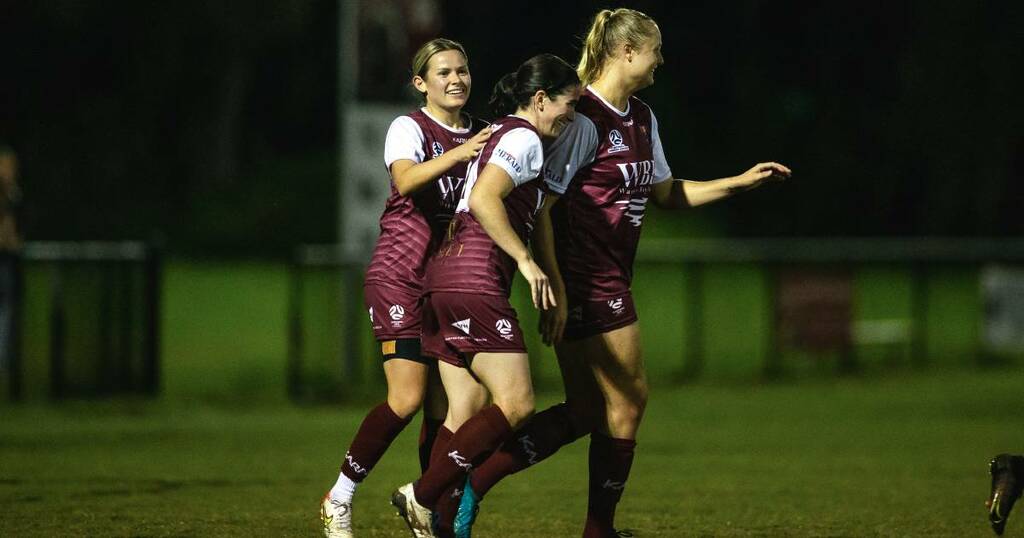 Jets captain Cassidy Davis welcomes Western United's addition to A-League Women
At the moment she is enjoying a return to the NNSW competition.

Newcastle Herald
From analysis to the latest developments in health, read the most diverse news in one place.
American Summer Taube keen to kick on in NPLW NNSW with Charlestown Azzurri

The midfielder has proven a key signing as Azzurri eye finals.

Cardiff held celebrations as part of the AFL's Sir Doug Nicholls Round.