Relentlessly positive, her trademark sunny optimism was an approach to life Olivia carried with her right until the end.

“I think every day is a blessing,” she once said. Yet despite early singing success, global fame and that sunny demeanour, Olivia didn’t escape tragedy.

Here, after her death this week at the age of 73, we reveal how, with characteristic honesty, she describes her highs and lows, from her parents’ divorce, to the joy of making Grease, finding and losing love, and living with long-term cancer.

The star grew up in Australia and made her home in California, but Olivia was actually born in Britain, in Cambridge.

Her father Brin was head of King’s College at Cambridge and a former Bletchley Park code-breaker, while her mum Irene was the daughter of Nobel Prize-winning German physicist Max Born, who had escaped Nazi Germany in 1933.

She was five when the family emigrated to Australia, although she always maintained a part-British sense of humour. “I do like a double entendre,” she once giggled.

Her first heartbreak came aged ten when her parents divorced.

“My father took me into his study and told me they were going to separate,” she recalled. “He sat me on his knee and I told him I wanted to stay with him.” She was told she would remain with her mother.

“I was just sad,” she said. “In some ways you always wonder if it was something to do with you.”

She also spoke of her regret at never meeting her famous grandfather, Max.

“My mother was always saying I must visit him. I’d gone travelling in Europe when I was 16 or 17, but I was always too busy to do as she said... I regret that,” she owned.

Olivia’s passion for singing struck young, and went against the grain of her academic family.

She joined bands as a teenager and fought with her mum. “She was concerned about education,” she says. “She wanted me to have something to fall back on.”

The compromise was to visit a singing teacher to discover if she had talent, but Olivia wasn’t impressed.

Winning a talent show in Australia aged 15 became Olivia’s ticket to success - literally, she won a ticket to the UK, where she secured a contract with Decca in 1966.

But suddenly, she was struck with fear. “My mother dragged me literally by the ear. I didn’t want to leave my boyfriend. At the beginning, I just wanted to leave. But I grew to love England,” she said.

Aged 29, Olivia initially protested she was too young to play Sandy.

And it seems no one was prepared for her character’s sexy transformation.

“The night before we filmed You’re the One That I Want, John was filming Stranded at the Drive-in and I had finished filming,” she recalled.

“I was trying on costumes, hair and makeup in the trailer and I don’t think anyone knew it was me at first as all the heads turned and I thought: ‘Wow! What have I been doing wrong all this time?’”

She also admitted a spark between herself and John Travolta that they never
acted on.

“There was an attraction, but we would never date because we were both involved with other people and both of us have a loyalty streak that runs deep,” she said.

A rare irritability could be noted in her voice when anyone tried to judge the 1978 smash-hit musical about high school by modern standards.

“It’s a story from the 50s where things were different,” she said. “Everyone forgets that, at the end, he changes for her, too. There’s nothing deep in there about #MeToo.”

Olivia admitted her parents’ divorce probably made her more “cautious” about marrying. “I wanted it to be the right choice,” she said.

An early engagement to Bruce Welch, The Shadows’ guitarist, aged 19, ended after six years without marriage. “I wanted to be really sure it was right,” she later said.

She finally married Matt Lattanzi, a dancer she met on the set of movie Xanadu. They were married for ten years from 1985 and had one daughter, Chloe.

After their divorce Olivia dated Hollywood cameraman Patrick McDermott for nine years, but the relationship was to end in the most tragic way when he disappeared after a fishing trip in 2005 off the Californian coast. It was decided he ‘most likely’ drowned.

Olivia wrote in her autobiography Don’t Stop Believin’: “As time went on and he remained missing, I had such an odd and hollow feeling in my gut…There were no answers. Only questions.”

She admitted she only met the true love of her life in middle-age. Her second husband, John Easterling, founder of the Amazon Herb Company, which sells plant-based remedies, had never even heard of her hits when they met through a mutual friend.

“I was 59 when I met the love of my life. There’s no time limit on finding The One,” she said, adding: “I really liked the fact that he didn’t know me from my films or music.”

Their early romance was rather unconventional. “‘He said: ‘I’d like to take you to Peru to meet the curandero healers’,” recalled Olivia. “It was a hell of a first date!”

It was she who proposed to him. “We were sitting by this incredible waterfall,” she described. “It was magical and I heard myself asking if I could be in his future. We haven’t been apart from that moment.”

Olivia’s first diagnosis of breast cancer came in 1992. It returned in 2013 and again in 2017 when, in “terrible pain” from a fractured sacrum, scans uncovered a tumour. She had to learn to walk again.

The star was always candid about her illness, and founded a hospital and wellness centre in Melbourne, Australia, where she herself was a patient.

She admitted natural fear. “I’m fearful sometimes and I’m sad and I go through moments like that. I’m human and you have to allow yourself to go through it,” she said.

But she explained: “I don’t think of myself as sick with cancer. I choose not to see it as a fight either because I don’t like war...” She also came to see it as a kind of “gift”, saying: “I want to be part of finding the end of cancer.”

Her husband John Easterling helped her to cope with the pain by growing cannabis on their ranch, which he turned into medicinal drops for her to take.

Always open about her medicinal cannabis use for pain-management, Olivia said: “I was nervous of it in the beginning.

She added: “I’m very grateful for it and I really do think it should be available for everyone.

“No one dies from cannabis. You die from opioids.”

Her husband John assisted her, also introducing her to her first hallucinatory drug experience. With him by her side, she underwent an Ayahuasca ceremony in the Peruvian rainforest.

She only had a little but was profoundly sick. She later said the ‘purge’ had cleared depression she was suffering.

“My entire body was at peace.

“When I stopped to think about it, it was abundantly clear that I had indeed purged much more than what was in my stomach,” she described.

”I remember when I was pregnant with Chloe, and I was close to losing her,” she once recalled. “I went to bed and asked God to save her and if he did, I would say the Lord’s Prayer every night for the rest of my life and so I have.”

Her daughter went through her own turmoil, battling drugs and anorexia. Olivia once expressed fears she could have triggered problems by not being honest with her about her first cancer diagnosis, when Chloe was a child.

“She felt something was wrong, that Mummy was not well, and I think that might have led to her not trusting her own instincts in later life,” she said. 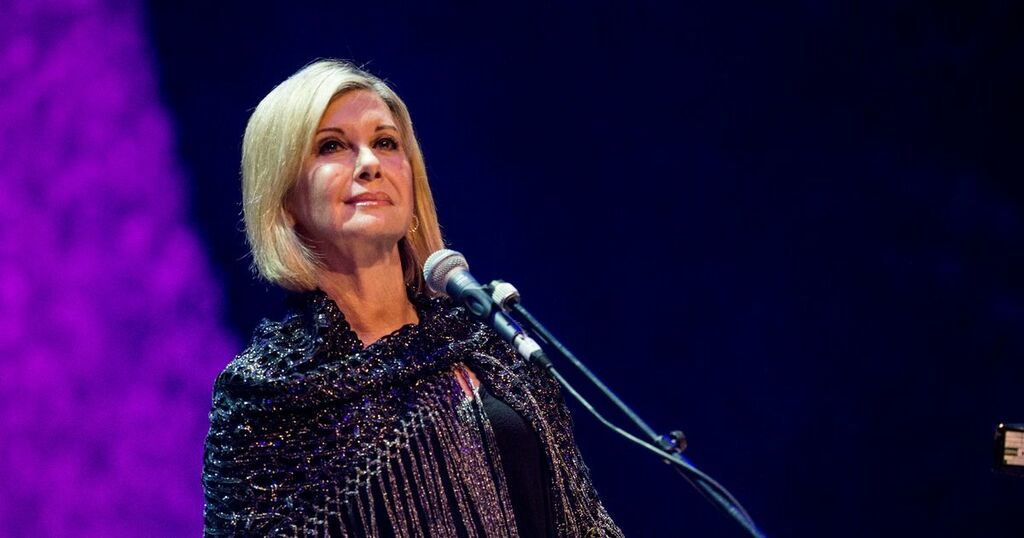 Glasgow Live
From analysis to the latest developments in health, read the most diverse news in one place.
Grease star Dame Olivia Newton-John, 73, dies after breast cancer battle

The British-born singer, Dame Olivia Newton-John, died at the age of 73, her widower confirmed. She was understood to have been surrounded by her family and friends.

Through all the success in Dame Olivia Newton-John's career, there were plenty of hard times as well — from a failed fashion brand to a hit song banned by some radio stations — meaning her life wasn't all glitz and glamour.

From the moment she appeared in the opening scene of Grease, running down the beach and kissing John Travolta while silhouetted by the setting sun, Olivia Newton-John was always going to be best remembered as Sandy Olsson.

Daily Mirror
One place to find news on any topic, from hundreds of sites.
Olivia Newton-John's love life from missing ex-boyfriend to finding love at 59

Olivia Newton-John was known around the world for her portrayal as Sandy Olsson, who became an icon in popular culture, in the musical film Grease and she soared to stardom as a result