LOS ANGELES — Olivia Newton-John, the beloved singer and actor known for her 1970s and ’80s hits and the movie “Grease,” died at her ranch in Southern California on Monday at age 73.

A cause of death hasn’t been announced, but she was diagnosed with breast cancer in 1992 and underwent years of treatment. The cancer returned in 2017.

“Olivia has been a symbol of triumphs and hope for over 30 years sharing her journey with breast cancer,” her husband, John Easterling, wrote Monday on the singer’s official Facebook page to announce her death. “Her healing inspiration and pioneering experience with plant medicine continues with the Olivia Newton-John Foundation Fund, dedicated to researching plant medicine and cancer.”

Easterling said that she was surrounded by family and friends when she died.

Born in Britain in 1948, the youngest of three children, Newton-John moved to Australia when she was 5 and started singing at 12. She won a singing contest in 1964 that had a ticket to London as a prize. There, she cut her first single and became a fixture on the music scene. She made her first record, “If Not for You,” which put a song on the Top 25 in the United States after it came out in 1971.

Then Newton-John found herself in Los Angeles.

She broke onto the U.S. country music scene in the early 1970s, winning the Academy of Country Music honor for new female vocalist in 1973. Once her career took off, it was — for nearly a decade — unstoppable.

The Grammys came quickly. She won female country vocal performance for “Let Me Be There” in 1974 and pop vocal performance and record of the year for “I Honestly Love You” in 1975. The latter hit No. 1 on Billboard’s Hot 100 that year, ahead of “Have You Never Been Mellow” that year.

She garnered the Country Music Association's female vocalist of the year award in 1974, beating Dolly Parton and Loretta Lynn. She was on TV specials and opened for Charlie Rich, the Smothers Brothers and Don Rickles in Las Vegas, then headlined on her own. Two of her albums that hit No. 1 on the Billboard 200.

And Newton-John was beautiful. Remarkably so. Still, despite her success and her rabid fan base, many critics took shots at her singing, saying she had no range and was just “another pretty voice.”

“Olivia Newton-John is often accused of having a very unsubstantial voice and only one asset — beauty,” Dennis Hunt wrote in a 1976 Los Angeles Times review of her show at the Greek Theatre. Then he went against the norm. “It is easy to form this opinion from listening to her records but it is not possible to cling to it after seeing her in concert.”

Other stories mentioned a need for more security when she played in Las Vegas if “the men in the audience get any more enthusiastic” than they were at one midnight show.

There was also the “nice” thing. The “innocent” thing.

“The only nasty thing people can find to say about N-J is that she’s too nice,” the Times wrote in 1977 while Newton-John was in production on her first big-budget feature film. “Her Sandra Dee-ish part in ‘Grease’ ... will do nothing to change her goody image.”

But the movie musical did include a notable image overhaul. It opened in 1978, featuring John Travolta’s bad boy Danny paired with Newton-John’s good girl Sandy, who by the end of the movie found herself reborn as a bad girl wearing full makeup, permed hair and black, skin-tight silk pants. The singer herself emerged emboldened.

It was peak Olivia.

The co-stars would remain friends. “When you share that kind of meteoric success — and nothing has been able to exceed it — you share a bond,” co-star Travolta told People at the movie’s 40th anniversary celebration in June 2018.

The “Grease” soundtrack sold more than 14 million copies in the U.S. alone (years later, Newton-John would settle a lawsuit with Universal Music Group over unpaid royalties), and the couple’s singalong duet “You’re the One That I Want” hit No. 1 too. “Hopelessly Devoted to You” was nominated for a 1979 Oscar and spent time in the Top 5 with the Travolta duet “Summer Nights.”

“Totally Hot” came out in 1979, bringing with it hot-pink stretch pants and black leather outfits. “I’m into a lot of freaky things lately,” she told the Times that year.

“I’ve lived with this innocent, clean-cut image for so long that at first, I was really frightened to do something different. ... I never had the nerve to break out before I did ‘Grease.' ... Also, I’ve never been hit on so much in my life as when I first put on those pants.”

Newton-John had lived with manager Lee Kramer at a time when “living with” wasn’t the norm, and she still wrangled with being pretty.

“Why is it that if you look a little bit funky, the critics give you better reviews?” she asked the Times reporter. “It’s because if you’re beautiful, they figure you must be dumb and a no-talent.”

The single “Magic” and the sexy tune “Physical” would top the charts in 1980 and ’81, respectively, as Newton-John changed her style and her sound, moving toward a pop-rock blend. In 1982 she started the Australian-style sportswear line Koala Blue.

But the 1980 roller disco fantasy musical film “Xanadu” had actually flopped. “Two of a Kind,” which paired her again with Travolta a few years later, would do slightly better, but her career as a big-screen leading lady was dead in the water.

Newton-John wound up lowering her profile from its fan-fueled peak, which had seen her smiling from glossy magazine covers regularly. She married “Xanadu” actor-dancer Matt Lattanzi in 1984 and two years later they had a daughter, Chloe. Living in Malibu’s Paradise Cove, she focused on her family and her environmental advocacy.

Then the ’90s arrived, bringing with them a 1991 bankruptcy filing for Koala Blue and a 1992 breast cancer diagnosis for Newton-John. She fought back with chemotherapy, a partial mastectomy and breast reconstruction, and she tried not to let her daughter know what was going on. But a friend had let it slip.

Chloe “came running home and said, ‘Is it true?’ I told her it was, and I promised her from then on I’d always tell her everything,” Newton-John told the Times in late 1994, when her cancer was in remission and she was back at work with a TV movie.

Though Newton-John had released a few personal albums over the years — including “Gaia: One Woman’s Journey,” chronicling her cancer struggle — her official return to the music industry wouldn’t come until “Back With a Heart” in 1998.

At that point, she seemed to have a new resolve, Times music critic Robert Hilburn wrote.

“I’m a very private person,” she told him. “I never imagined I could talk about my breasts like this, but I do it because I think it helps other women. ... It’s the word ‘cancer’ that freaks everybody out. But it’s important to realize it’s not necessarily a death sentence.

“I remember in my first year of treatment this lady had read about me in the paper and she came up to me, and said, ‘I’m 20 years down the track now.’ That was a defining moment for me. I was thinking of five years as my goal, and here was someone who had (lived) 20 years after the surgery.”

She continued releasing music and amped up her efforts to fight cancer, eventually opening the Olivia Newton-John Cancer Wellness & Research Center in the late 2000s in Melbourne, Australia.

Newton-John’s 11-year marriage to Lattanzi ened in divorce in 1995. She moved on to date gaffer-cameraman Patrick McDermott for nearly a decade until he disappeared at sea in 2005. Then, in 2008, the singer married businessman John Easterling and moved to Florida with him, selling her Malibu home the next year.

Christmas albums arrived in 2012 and 2016, the first one recorded with Travolta. Newton-John also continued performing with shows that included a “Summer Nights” residency at the Flamingo in Las Vegas that started in 2014 and ran for three years.

In 2017, the cancer returned, metastasizing to her spine and causing her to cancel concerts in the U.S. and Canada. Over the years, she had incorporated herbs and other natural supplements into her health regimen. She also used medical marijuana as a painkiller.

“I denied to myself for a long time that I had ambition,” Newton-John told critic Hilburn after a show in 1982. “I’m more comfortable with that now because I realize my drive isn’t improper. ...

“I’ve always wanted to do better at whatever I was doing, but I don’t think it was ever a desperate drive. Even when I worked dingy little clubs in the beginning, I enjoyed it. It wasn’t like I was thinking, ‘I can’t wait until I get out of here and make it to the top.’”

Her family asked that donations be made to the Olivia Newton-John Foundation Fund in her memory in lieu of flowers. 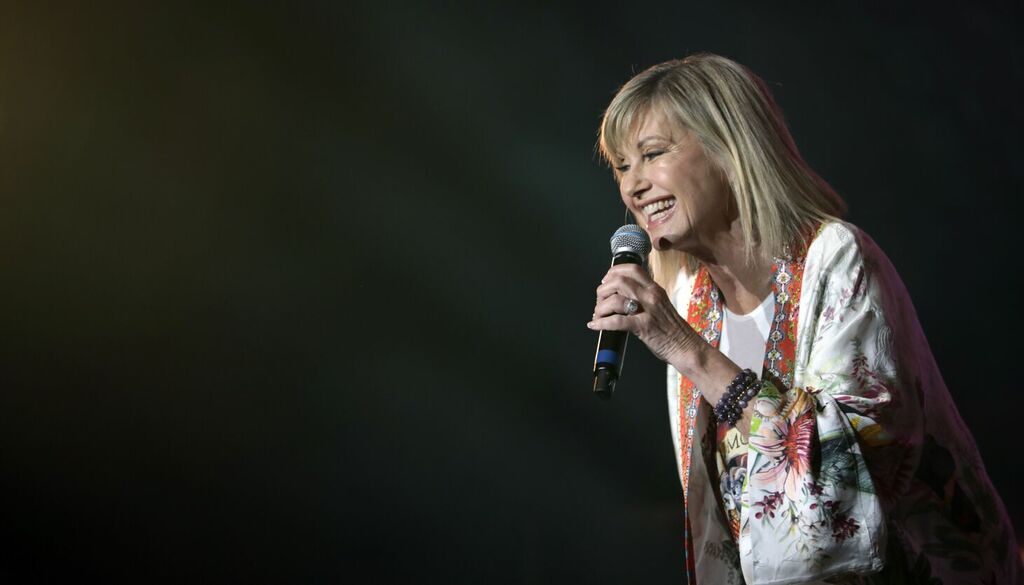 Olivia Newton-John, star of ‘Grease,’ ‘Xanadu,’ dies at 73
Newton-John recorded nine Top 10 singles throughout the 1970s, including the duet with John Travolta of “You’re the One That I Want,” from the soundtrack of the 1978 musical feature film “Grease.”

Chicago Sun-Times
From analysis to the latest developments in health, read the most diverse news in one place.
Grease star and singer Olivia Newton-John dies aged 73

Singer Olivia Newton-John, who gained worldwide fame as the high school sweetheart Sandy in the hit movie "Grease", died on Monday after a 30-year battle with cancer. She was 73.

The British-born singer died ’peacefully’ at her ranch in Southern California, surrounded by family and friends

Evening Standard
One place to find news on any topic, from hundreds of sites.
Dame Olivia Newton-John, singer and actor star of Grease, has died age 73

The singer and actor was 73-years-old