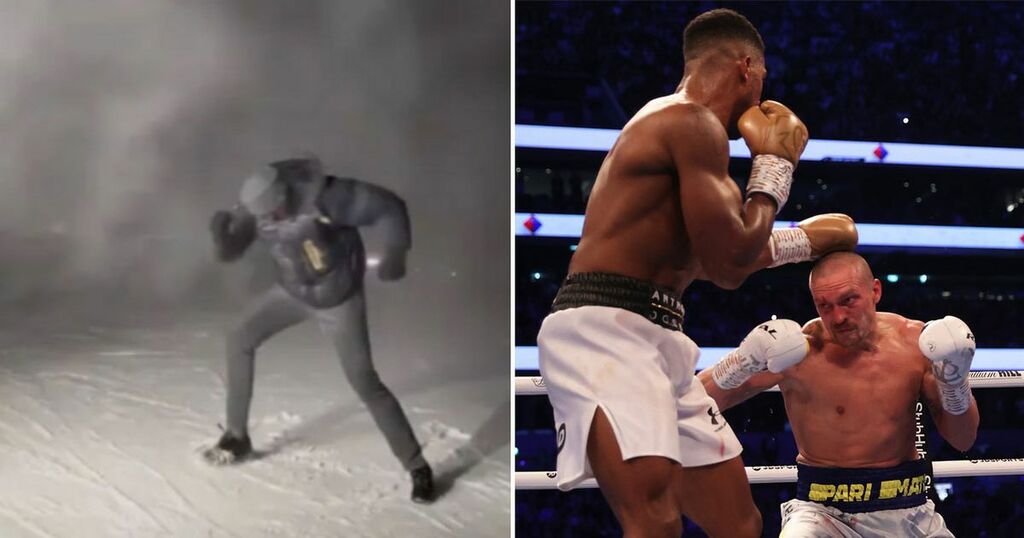 Oleksandr Usyk has revealed his remarkable wintery training regime ahead of his eagerly anticipated rematch with rival Anthony Joshua.

Usyk initially took on Joshua in September of last year in London, and put on a boxing masterclass to defeat the Englishman on home soil and take his three heavyweight titles.

Following defeat Joshua immediately looked to activate the rematch clause in the pair’s contract, and the rivals second bout is set to take place around April of this year.

There is no doubt the Englishman will be keen to win back the titles he lost four months ago, however Usyk will be in no mood to hand them back and the Ukrainian has therefore put himself a strange - but rigorous - training regime ahead of the fight.

The 34-year-old shared a bizarre video of himself training in the harsh Ukrainian winter conditions, whilst shadow boxing into an icy storm blowing into his face by a fan.

Usyk’s rematch with Joshua is still yet to have a confirmed date and venue, however the latter’s promoter Eddie Hearn recently gave fans a time frame to look forward to.

Hearn said: “I think April is realistic for that fight.

“Before you know it, it's going to be February and these fights take a lot of organising."

The promoter also gave an update on where the fight could potentially take place, adding: “For us the preferred date and venue for that fight will be the UK.

“In which case we would have to do the fight outside, so we’re not really interested in doing that fight in March.

Have Your Say! Will Usyk or Joshua come away with victory in the rematch? Tell us your prediction here.

“AJ has been training relatively solidly since the fight.”

Whilst Usyk has been training in wintery Ukrainian conditions, Joshua’s prep has come in a much warmer climate after touring a number of gyms in the United States in Dubai in recent months.

The Englishman’s gym pitstops have led to plenty of speculation surrounding the future of long-time coach Rob McCracken, after it was rumoured Joshua was on the lookout for new blood following defeat in September.

And whilst Hearn believes his fighter is taking a ‘huge risk’ in looking for a new team ahead of the fight, he has full trust in Joshua to make the right decision.

The promoter commented: “It is a huge risk but if you feel like you need a change and you can't go on in a specific way any more, the alternative is much more risky.

"If AJ didn't make any changes and wasn't comfortable with his approach going into the rematch, I feel like we shouldn't be taking that rematch.

"But the fact he's been so proactive and positive and whatever route he goes down, I know he'll be comfortable with that decision."