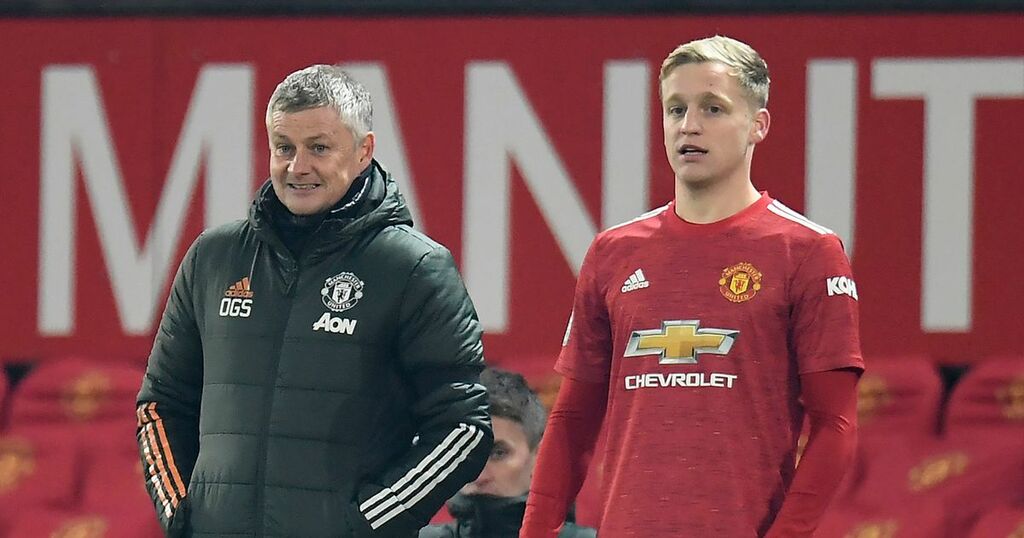 Ole Gunnar Solskjaer has given Donny van de Beek reason to be positive over the future of his Manchester United career.

It comes after the Red Devils coach admitted he was open to the midfielder's own proposition over his role at the club.

For the Dutchman, his £40m move from Ajax was supposed to signal the next step in his blossoming career after a strong start in the Netherlands.

But it has been two steps back for Van de Beek, who has largely remained an anonymous figure at Old Trafford.

Solskjaer has preferred the combination of Fred and Scott McTominay to hold in front of the defence while Paul Pogba and Bruno Fernandes have been given license to roam forward.

Even when one has been unavailable, Van de Beek rarely got a look-in and completed just three Premier League matches last season.

After impressing coaches in pre-season, many believed that the Netherlands international could force his way into Solskjaer's reckoning.

But it has been a similar story so far with Van de Beek failing to play a single minute of action so far this season and the midfielder has insisted he is open to changing his position in a bid to get into the team.

He told the FIVE YouTube channel he would be willing to drop deeper in midfield, saying: “I think I can do but of course I don’t know what the manager thinks and what he expects for me.

“I have played this role before at Ajax. Of course by the end I was playing no.10 but I play also a few games as no.6 so yeah I think I can play in this role as well.

“That’s really difficult to say it depends how you play as a team. Like I think how we play I think my best position is in the middle as a no.6 or a no.8 but I don’t care where, I only want to play.

“I want to be a part of the team this year. I want to be important. I know if the game time comes the goals and assists will come but for me it’s just as important I think that when I get the chance I have to be there now, that’s important.”

And Solskjaer admitted that Van de Beek could be an option after stating that he was open to his demands.

“Donny has very good qualities,” he said. “He’s had a disappointing season last year, a disappointing end when he got his injury and stopped him playing for Holland at the Euros.

Can Van de Beek be a success at United? Comment below

“He has worked really hard. He’s waiting to be unleashed and to show what he can do. He can play as a six in a (midfield) two, he can play as an eight as an attacking midfielder, as a 10, we have used him on the wide left coming inside.

“He is a footballer with many qualities that we like at the club but yes, he can play as one of the two in midfield.”

Van de Beek could have seen his chances boosted of starting against Newcastle this Saturday but with Brazil waiving their right to suspend players, Fred is back in contention to start.

Scott McTominay remains a doubt despite training with United this week as he looks to regain fitness following a groin operation.