By Sam Jones in Guadalajara 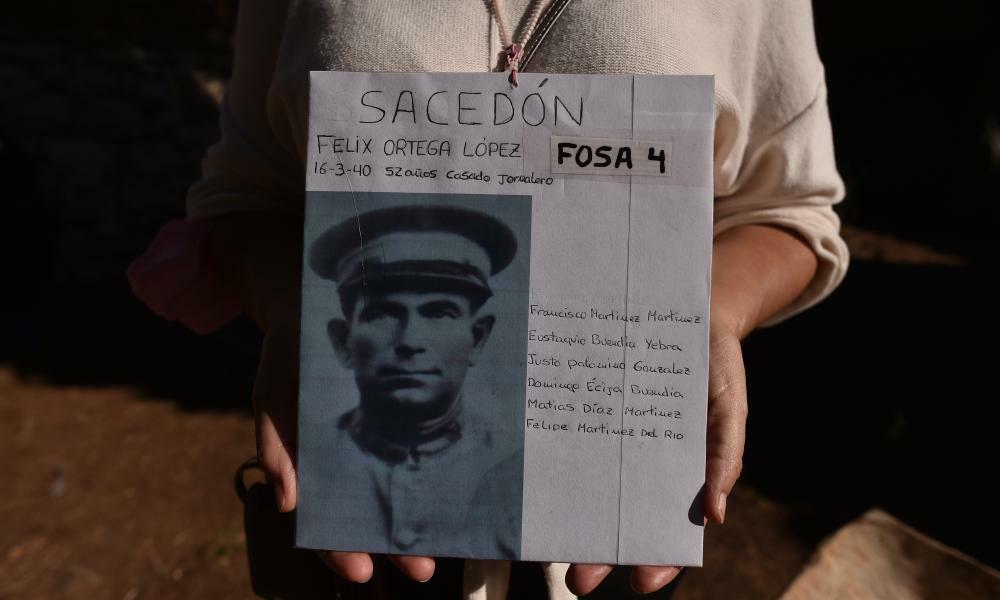 Trowel-heap by trowel-heap, brushstroke by brushstroke, a skull rises from a pillow of ochre earth. Its empty eye sockets stare up at the October sky and its jaw gapes, as if still screaming, gasping for air or remembering what happened on the other side of this bullet-bitten cemetery wall a year after the Spanish civil war had ended.

Between 16 March and 3 May 1940, 26 Republican soldiers, workers, communists and trade unionists were summarily tried and shot dead in the central Spanish city of Guadalajara.

Their bodies were tossed into a four metre-deep pit in the corner of the local cemetery reserved for suicides, the unbaptised, the unconfessed, and the irredeemably wicked. The area was sealed off during the Franco dictatorship, leaving the men’s relatives to pay their respects by throwing bunches of flowers over the wall.

Today, however, the bodies of mass grave No 4 of Guadalajara’s municipal cemetery are being brought up for a decent reburial – and are emerging into a country still bitterly divided over how to deal with the toxic legacy of the civil war and the four-decade dictatorship that followed.

This week, congress will debate the Socialist-led government’s “Democratic Memory” bill, which builds on landmark legislation from 2007, and which is intended to “settle Spanish democracy’s debt to its past”.

Its 65 articles include a census and a national DNA bank to help locate and identify the remains of the tens of thousands of people who still lie in unmarked graves, a ban on groups that glorify the Franco regime, and a “redefinition” of the Valley of the Fallen, the hulking mausoleum outside Madrid where the dictator lay for 44 years until his exhumation in 2019.

The government says the proposed law will help “encourage a shared discussion based on the defence of peace, on pluralism and on broadening human rights and constitutional freedoms”. Some, however, are in no mood to talk. Or listen.

Spain’s conservative People’s Party (PP) – the descendant of a political alliance founded by former Francoist ministers – has long opposed efforts to probe the past, arguing that the pact of forgetting that enabled Spain’s return to democracy ought to be respected.

The PP’s Mariano Rajoy, who was prime minister from 2011 to 2018, boasted of cutting Spain’s historical memory budget to zero after his administration inherited the 2007 law. Last Sunday, Pablo Casado, who succeeded Rajoy as PP leader, stood in a bullring in Valencia and promised to repeal the new legislation, saying it served only to “dig up grudges”.

Fernando Martínez, a historian who was appointed secretary of state for democratic memory last year, has little time for such complaints. Speaking to the Observer as a team of forensic experts prepares to enter the Valley of the Fallen to begin searching for the bodies of 77 of the thousands of people whose remains were reburied there alongside Franco without their families’ consent, Martínez says the proposed new law is both timely and overdue.

“There’s a fundamental point here, which is that these sorts of things say a lot about a democracy,” he says.

“And, obviously, this country has to live up to the same standards as its neighbours in western Europe who have already resolved these questions. All this – recovering the bodies and redefining the valley – strengthens democracy. You could say it’s all a bit late, but it has to be done.”

The Valley of the Fallen, with its 150-metre cross, has long acted as a symbol for those who rue the end of Francoism and its creed of National Catholicism.

It is precisely because of that, says Martínez, that the site must be turned into a place of solemn remembrance where visitors can come to learn about everything the mausoleum was intended to celebrate and symbolise.

“That’s the best antidote to the totalitarian outbreaks that are happening at the moment. It’s like visiting a Nazi extermination camp – when you leave, you do so with the firm determination that these things should never happen again.”

Francisco Etxeberria, a leading forensic anthropologist who examined the remains of Cervantes, and was called in to establish how both Salvador Allende and Pablo Neruda met their ends, is the man leading the recovery of the 77 bodies.

Not for nothing does he describe the operation as “a really exceptional challenge”, and one that could take until the end of next year. Spain’s largest mass grave is crammed with the remains of some 33,800 people from both the Nationalist and Republican sides, whose bones were dug up from cemeteries across Spain and reburied in the monument in a feigned attempt at reconciliation.

Although 21,000 sets of remains were taken there with the knowledge and permission of the families – and those from the Nationalist side were labelled with names and surnames – the remainder arrived in boxes stating only how many bodies they contained and which town they had come from.

As if that weren’t enough, water has seeped into the floors and walls of the mausoleum’s crypts for decades, destroying many of the boxes and mingling bones.

“There are thousands of boxes in each chapel, and they’re stacked from floor to ceiling, like shoeboxes,” says Etxeberria. “You have to drill into the walls – which are brick, concrete and cement – to open up a hole. All you can see are the boxes. Nothing else.”

While the exhumations – the culmination of a tortuous legal battle – are family matters, the forensic anthropologist believes that they could have a wider significance and impact. “I always think things like this help broaden the conversation about human rights,” he says. “Young people are already being taught about human rights values; we never had that kind of training and education about human rights when I was young. This shows that if things happen, there are things that can be done on behalf of those who suffered.”

But for many of the families, relief at seeing work finally begin in the valley is tempered by how long it has taken. Manuel Lapeña, whose father and uncle were killed by Franco’s forces in the early days of the civil war, died last month at the age of 97. His family are sad and angry that he did not live to see the bodies retrieved from the valley and reburied in their home village of Villarroya de la Sierra.

“I’ll believe it all when I see it with my own eyes,” says Manuel’s daughter, Purificación. “We’re really fed up, but the thing is that we’re talking about people now who are really old – like my dad was. They’re the last ones who actually knew the people [who were reburied in the valley] and they’re disappearing, one by one.”

That sense of frustration is shared by Emilio Silva, the president of the Association for the Recovery of Historical Memory (ARMH), a human rights group that has spent two decades exhuming mass graves and campaigning for justice for Franco’s victims.

For Silva and many of his colleagues in the ARMH – which is funding and co-ordinating the excavations in Guadalajara – the draft law doesn’t go far enough when it comes to justice and reparations. “They’re drawing up a census of victims but there’s no list of executioners,” he says. “And nowhere in the draft law’s pages is there a mention of the Catholic church, which was one of the biggest instruments of the repression. The law glosses over things; it’s designed not to bother anyone. That’s a problem. A proper memory law should upset the executioners,” he adds.

As Silva speaks, a man walks into the cemetery and stops to chat with a ARMH worker and to check the burial records the excavation team is using.

His name is Jesús Ropero, and until the previous night he knew little about his great-uncle save what his mother could remember from her childhood.

Felipe Sanz Rueda, a “very idealistic and leftwing” charcoal-maker, was taken from his prison cell and shot by the cemetery wall on 26 April 1940. He was 27. His great-nephew, a 65-year-old retired photographer, chanced on his name in an ARMH tweet the previous night and has come down to find out more.

“My mother used to bring him food when he was in prison,” says Ropero. “One day she took his food as usual, but when she got there they told her that he wasn’t there any more. That was all they said. But everyone knew that if they said someone wasn’t there, then they were here in the cemetery.”

He stands a few metres from the pit which, by now, has given up two more skulls. By the end of next week, the exhumation team hopes to have recovered the remains of all the 26 men whose bodies were cast into the grave more than eight decades ago.

The idea of forgetting what happened, says Ropero, is impossible. “This is a story that needs to be told like any other, and we need to find out as much as we can,” he says. “People sometimes say that this is about opening up old wounds but I think it’s just the opposite. People feel better when they know the history and have their relatives back. I think that heals wounds.”