Old enough to know better: The 70-year-olds whose crimes shocked the city

They say that with age comes wisdom, but additional life experience doesn't stop people from breaking the law. While many criminal cases involve younger people, there are regularly cases of pensioners being hauled before the courts after committing crime.

Whether they were drink driving, sexual offences or anti-social behaviour, here are some of the shocking cases involving older people to appear in the courts.

Mowl, 71, was unmasked as a paedophile after unwittingly chatting online with an undercover police officer.

Mowl claimed he had been advised to look at pornography online to help his 'sexual arousal' because of medical issues, but went onto download sick child abuse images, as well as engage in sexualised chats with someone he believed was a 'teenage boy'.

He asked the 'boy' intimate questions, and sent him a picture of a penis. It was actually an undercover officer working online to expose paedophiles.

After police went to his home in Stockport and seized electronic devices, officers recovered six category A indecent images of children, the most serious category, as well as three category B and 34 category C images, featuring children from the ages of seven to 12.

Mowl, of Timken Way, Daventry, Northamptonshire, who had no previous convictions, pleaded guilty to three offences of making indecent images, and one count of attempting to engage in sexual communication with a child.

He was sentenced to nine months in prison, suspended for 18 months.

A 73-year-old pulled a an imitation gun on his neighbour in a bizarre row. Anthony Law knocked on the man's door and said 'f****** put the lights on', before pointing the 'gun' at him.

The pair had never met before and lived in the shared sheltered accommodation in Salford. Law had been 'very distressed' that the electricity had not been working in his flat, and mistakenly believed that his neighbour who lived in the floor below was an electrician.

Police attended and seized the realistic looking imitation firearm, which was said to resemble a handgun and had six gold bullets in the chamber. Law had acquired the gun abroad 'years ago'. It could fire ammunition but not at an energy level which would make it a formal firearm, the court heard.

Law, of Oswald Close, Salford, pleaded guilty to possessing an imitation firearm with intent to cause fear of violence. His barrister said Law had experienced a 'marked decline in his cognitive function' prior to the incident.

Sentencing, Judge Hilary Manley told the defendant: "You knew that the object that you brandished briefly at your neighbour downstairs was not a real firearm. He didn't know that. It frightened him, it made him believe he was in danger." Law was sentenced to a 12 month community order.

Davies said she was 'ashamed' of herself after being hauled before the courts for drink driving. The 67-year-old had supped wine behind the wheel after being pulled over by cops, after being spotted in Glossop town centre while appearing unsteady on her feet.

Police questioned her and Davies said she was okay and hadn't been drinking. Officers accepted her explanation but decided to follow her for a short distance, and then pulled her over.

Davies admitted to officers she was under the influence of alcohol. Prosecutor David Morgan said: "She denied drinking, but then said she had had two glasses of wine.

"She took a sip of a water bottle, which was in fact white wine." Tests revealed Davies, who has a previous conviction for drink driving from 2012, had 90 micrograms of alcohol in 100ml of breath, more than double the maximum of 35. She was sentenced to a 12 month community order, and handed a three year driving ban.

Sansby, who attended a top independent school, had his home raided by police after they received a tip off. He told officers: "I downloaded it but I scrubbed it off."

After police found the images on his computer Sansby went on to make 'full admissions' to police. But he claimed he didn't know it was illegal to possess such images. Sansby, of Bradley Green Road in Hyde, was handed a 12-month suspended prison sentence after pleading guilty to possessing indecent photographs of children and possessing extreme pornography.

Coombes was described as 'toxic' and having 'corroded' the community where he lived. Police had received more than 100 calls involving the 73-year-old since 2018, some from 73-year-old Coombes but also many others from residents complaining about him.

Officers slammed his actions in the village of Llansannan in Conwy, North Wales. Inspector Andrew Kirkham said Coombes was 'extremely obstructive' and had worn down officers.

"His behaviour for many years now has been described to me as toxic and has corroded the wellbeing of the village," he said. He denied four charges of threatening to cause criminal damage, assault occasioning actual bodily harm, criminal damage and possessing an offensive weapon, but was convicted following a trial.

One of his victims said it triggered her PTSD after she had been a victim of the Manchester Arena bombing. Freya Fisher Jones, 18, had been with two young men and while they were driving through the village, Coombes started waving his arms in the air and threw something at the car.

When they stopped, Coombes pushed one of the men and Ms Jones. She was left bleeding from the ear and bruised after Coombes 'banged her head several times against a lamppost'. Coombes was jailed for two years following a hearing at Mold Crown Court. 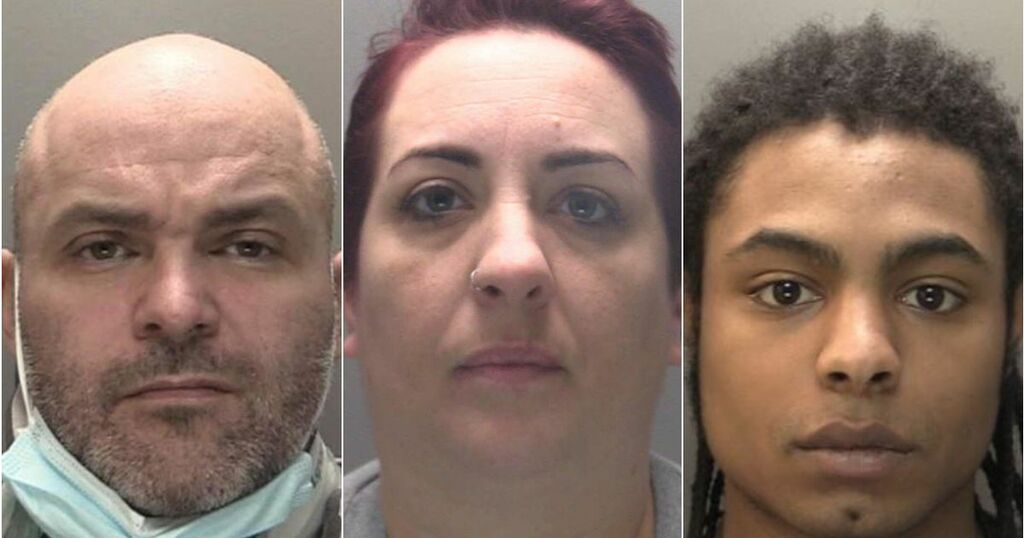 Luke Hunter, of High Callerton, was found with disturbing right wing material and indecent images of children when police raided…