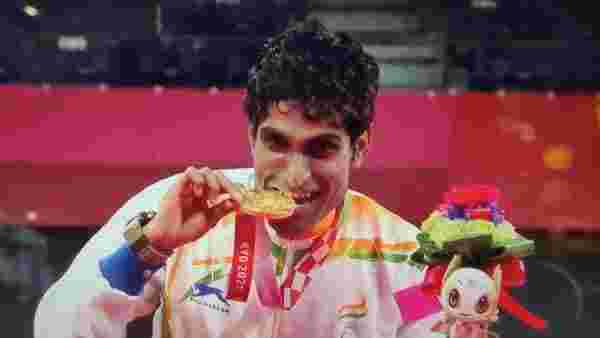 Bhagat, who comes from Bhubaneswar, had defeated Daniel Bethell of Great Britain in badminton men's singles SL3 to win a gold medal for the country in Tokyo Paralympics.

With badminton making its debut at the Paralympics this year, Bhagat, became the first Indian to win a gold medal in the sport.

"This is very special to me, it's my dream come true. Bethell really pushed me but I just kept my calm and played to my strengths," Bhagat had said after wining gold medal in the Tokyo Games.

"I would like to dedicate this to my parents and to everyone who has supported me throughout. I'm glad I could make India proud."

Bhagat said he had a strategy in place against his rival Bethell. He said that he had played the same opponent in Japan two years ago and he had lost. "That was a learning opportunity for me. Today it was the same stadium and the same environment, and I devised a strategy to win. I was very determined," he said.

Bhagat, who had contracted polio when he was four years old, picked up the sports after watching his neighbours play. Initially, he competed against able-bodied players before getting into competitive para badminton in 2006.

He eventually emerged as one of the best para shuttlers in the country with 45 international medals under his belt, including four world championship gold medals and a gold and a bronze in 2018 Asian Para Games.

He also had started his career as a badminton coach but took a break in 2019 to focus on Tokyo Paralympics qualification.

In 2019, he received the Arjuna Award and Biju Patnaik Award for Excellence in Sports in India.