NWSL Players Pause Games After Six Minutes of Play: 'This Is Not Business As Usual' 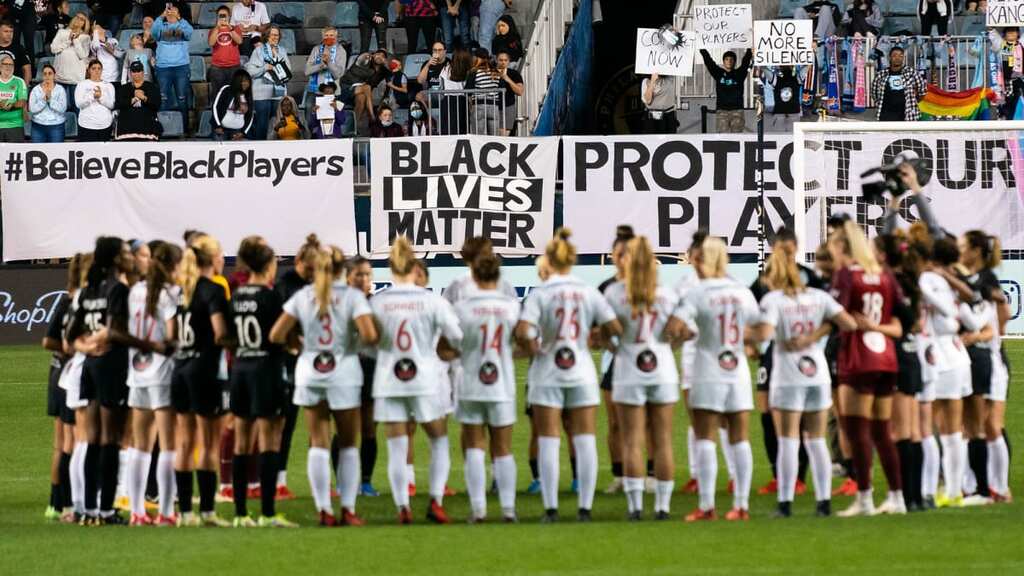 "Tonight, we reclaim our place on the field, because we will not let our joy be taken from us," the statement read. "But this is not business as usual."

NWSLPA announced each team will stop play at the sixth minute on Wednesday and players will stand in solidarity at midfield "for one minute in honor of the 6 years it took for Mana, Sinead, and all those who fought for too long to be heard."

"We call on fans to stand in silence with us. During that time, we ask you to stand in that pain and discomfort with us, as we consider what we have been asked to sit with for too long. We call on you to consider, in that minute, what is demanded of each of us to reclaim our league and our sport."

The Players Association added that after the games, players will not "answer any questions that do not relate to abuse and systemic change in NWSL."

"The reckoning has already begun. We will not be silent. We will be relentless in our pursuit of a league that deserves the players in it."

Wednesday marked the first competitions since the NWSL called off last weekend's games as the league faces large-scale scandal.

Sinead Farrelly and Mana Shim both shared incidences with The Athletic of when Riley allegedly sexually coerced the former players, including when Riley allegedly led the two players to his apartment in 2015 after a night of drinking and pressured them to kiss each other while he watched.

Shim filed a complaint about Riley's behavior with the franchise's front office several days after the 2015 season ended. However, Riley stayed employed with the league, later being rehired in 2016 by the Western New York Flash (the franchise that ultimately relocated to North Carolina).

Riley was fired on Thursday after the report was published, and NWSL commissioner Lisa Baird resigned on Friday night.

The same night, FIFA announced it will be conducting its own investigation into the Riley allegations "due to the severity and seriousness of the allegations being made by players."

"As part of this, FIFA will be reaching out to the respective parties, including U.S. Soccer and NWSL, for further information about the various safeguarding concerns and allegations of abuse that have been raised," the statement read, in part. "When it comes to misconduct in football, we would like to reiterate that FIFA’s position is clear: anyone found guilty of misconduct and abuse in football shall be brought to justice, sanctioned and removed from the game."

The U.S. Soccer Federation followed soon after, announcing that it "will launch an independent investigation into the allegations of abusive behavior and sexual misconduct reported yesterday by The Athletic."

The league's board of governors announced multiple changes and initiatives following Riley's firing and Baird's resignation, including the formation of an executive committee that will oversee the league's front office operations while the NWSL conducts a global search for a permanent commissioner. Additionally, NWSL retained Covington & Burling to investigate the environments players compete, train and live in, and reform measurements will be suggested at the end of the investigation.

This will include reopening of the 2015 investigation on Riley's departure from the Portland Thorns and his hiring by the Flash.

However, the NWSLPA announced on Wednesday their own demands for addressing the systemic transformation needed within the league, which include but are not limited to expanding the scope of the league's investigation. Additionally, they want to introduce new protocol that would require any person in power "at the time that a Club either hired or separated from employment a coach who was, is, or will be under investigation for abuse be suspended from any governance or oversight role within NWSL pending the conclusion of an independent investigation, effectively immediately."

The scandal across the league extends beyond Riley.

Spirit majority owner Steve Baldwin announced his plan to resign from his roles as the CEO and managing partner, effective immediately, on Tuesday. The move came after the club announced last week that it had fired coach Richie Burke for cause after he was initially suspended for allegations of verbal and emotional abuse in August.

According to the Washington Post, NWSL's investigation into the coach expanded to allegations by several female employees of a toxic “old boys’ club” culture, which included a male executive using degrading nicknames for female players.

Burke was reportedly fired for harassment and creating a toxic work culture for female employees, per a Washington Post investigation. In the report, former players said Burke “made racially insensitive jokes” and described him as being “unbelievably volatile.”

Spirit players took their fight public on Tuesday as they posted statements on their social media pages calling for him to sell the team to Y. Michele Kang. Players voiced in their unified statement that who they trust is Kang as she "continuously puts players' needs and interests first."

Beyond Riley and Burke, OL Reign coach Farid Benstiti was forced to resign in July after inappropriate comments made during training. Racing Louisville coach Christy Holly was also fired for cause earlier this season, and Gotham FC general manager Alyse LaHue was dismissed for violating the league’s anti-harassment policy.