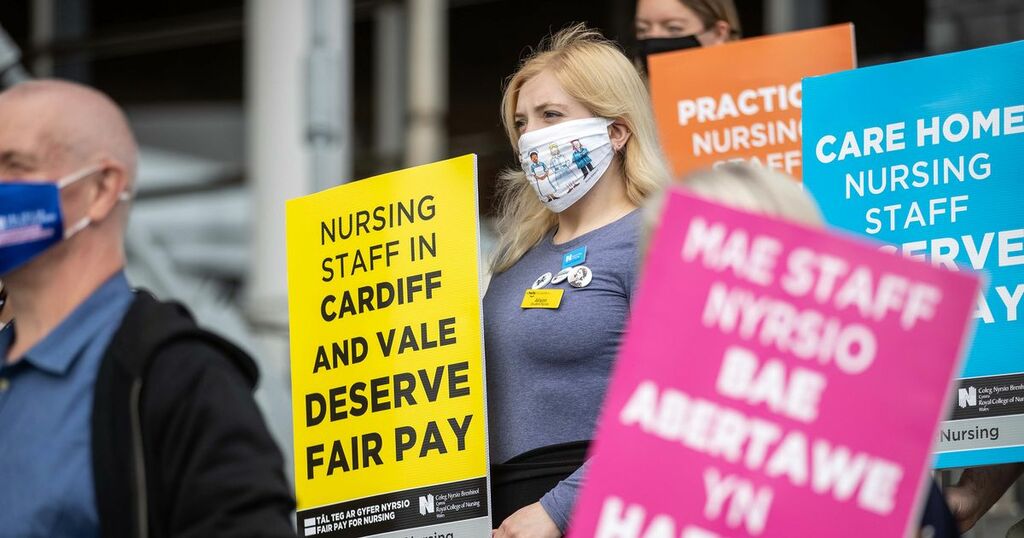 Nurses have held a silent protest on the steps of the Senedd against the 3% pay offer announced by the Welsh Government.

On July 21 both the UK and Welsh governments accepted the recommendations of an independent pay review body to offer a 3% pay rise to NHS employees backdated to April 2021.

The Retail Price Index measure of inflation - the rate most commonly used to apply pay awards - is 3.9%, so it could be argued that a rise of 3% is effectively a pay cut in real terms.

Last month we spoke to engaged couple Jeremy Davies and Tracy Webber, both NHS workers from Wrexham, who claim nursing staff will leave the profession in their droves following the "insulting" pay offer.

One of the people at the protest on Wednesday afternoon was Alison Jane, a first-year nursing student who travelled from Gwynedd to Cardiff for the demonstration.

The 26-year-old has spent the past 12 months on different wards in Ysbyty Gwynedd, Bangor, learning vital skills from experienced staff at Betsi Cadwaladr University Health Board.

"Their pay doesn't reflect their responsibilities which have grown considerably over the years - particularly since there's been a degree for nursing," she said.

"I was working in care before starting my nursing studies began, but as a student I can actually get more money working on bank as a healthcare assistant than I can as a nurse. There's no incentive to get people into nursing.

"The majority of times I was on placement they were short-staffed on the wards."

Alison, who is a student ambassador for RCN Wales, said nurses in Wales are at times struggling to make ends meet as their pay was not keeping up with the rising cost of living.

"This pandemic has highlighted the importance of the healthcare system and emphasised just how hard nurses work. It makes the 3% pay rise even more of a kick in the teeth," she said.

"Everybody was clapping for key workers and the NHS. The government has seen the 3% rise as good enough and something to shut them up - but it's not and it won't."

RCN Wales and Unison Cymru Wales both opened their pay consultation last month. A majority vote by healthcare workers against the award is likely to trigger a ballot for industrial action.

Richard Jones MBE, RCN Wales board chairman, said: "We are here at the Senedd in Cardiff today to protest - silently - in response the 3% pay deal imposed by the Welsh Government.

"Silently, because we have become at times lost for words with the way nursing staff have been treated following what has been the NHS' most challenging year to date, but also because we are respectful and are showing a direct contrast to the way the Welsh Government have acted in relation to the pay award.

"Nurses all over Wales work tirelessly, they are devoted professionals but they are becoming extremely tired and worn out, not only by their demanding jobs but also by the lack of respect they are being shown by our Government.

"Fair pay for nurses is what we are asking for, and fair pay is what nurses undoubtedly deserve - 12.5% is what the RCN are calling for and we will not stand for this paltry 3% pay deal."

Announcing the pay offer last month, Health Minister Eluned Morgan said: "I want to thank our Welsh NHS staff for their extraordinary efforts over the course of this pandemic. Many staff have worked extremely long hours under enormous pressure.

"This pay rise recognises the dedication and commitment of hardworking NHS staff and the enormous contribution they have made. It is also a recognition of how valued they are by Welsh communities.

"For our lowest paid staff, this means we have gone above the Living Wage recommendation of £9.50 an hour, demonstrating our commitment to NHS Wales being a Living Wage employer."