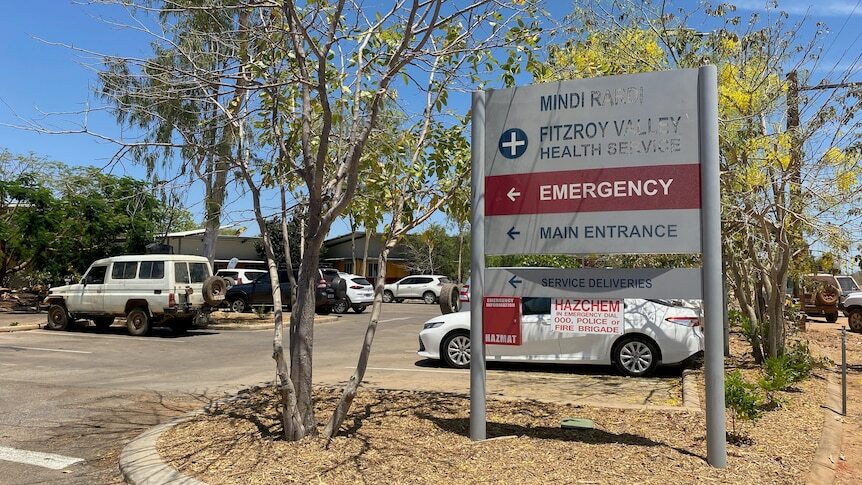 An urgent call for nurses sent by a high-level employee has warned of "imminent service failure" at hospitals in northern WA, a worrying escalation the WA opposition says shows the system is at crisis point.

The email sent by a nursing boss at WA Country Health Service, and seen by the ABC, pleaded for nursing staff to help fill workforce shortages in the Kimberley, especially at hospitals in Fitzroy Crossing and Wyndham.

"We are currently at imminent service failure in the Kimberley — particularly at Fitzroy Crossing and Wyndham — and urgently need nursing staff to assist immediately," the email said.

The email stressed emergency department staff were most in need.

"I know everyone is challenged with nursing workforce shortages but can I please ask to share with your network to see if anyone is willing to assist for days/a week or two to get us through this latest challenge," the email said.

"Health workers in the East Kimberley and Fitzroy Crossing deserve some strong assurances that strong action will be taken and taken urgently in response to real concerns, some dire warnings."

The WA Country Health Service said there would be no interruption to services at either location, and all its Kimberley sites were staffed with safe and appropriate levels of employees.

Health Minister Roger Cook did not respond to questions.

Border closures have made it difficult for WACHS to find staff in recent months, an issue felt in a number of sectors across the Kimberley.

In August the service scrambled to boost resources in response to a rush of people needing to receive a COVID test at Kununurra Hospital due to border restrictions imposed on WA.

But questions are now being asked about how already short-staffed hospitals in the Kimberley would cope with a COVID outbreak when borders open up, especially when vaccine rates in some communities remain stubbornly low.

"It isn't just COVID. These issues have been coming for some time," Ms Mettam said.

"The concern is how we will be able to respond to COVID when it does come to the community, particularly with very poor rates of vaccination."

"Obviously it's a priority given the direct impact it [staffing] has on patient outcomes."

Former Derby West Kimberley Shire president Peter McCumstie has long advocated for more funding for health in the region while holding leadership positions on a variety of Kimberley organisations.

Mr McCumstie was running for a return to the council and said the email should spark quick intervention from government to ensure hospitals were properly staffed.

The call-out for staff specifically for Wyndham Hospital comes after nurses living in the town raised the alarm about crime.

WACHS Kimberley acting regional director Ruth Crawford said in a statement the service was aware of an increasing number of break-ins and aggressive incidents at staff accommodation in Wyndham.

"Any kind of aggressive behaviour toward our staff will not be tolerated and people who behave like this are not welcome in our hospitals," she said.

"This is in addition to swipe-only access, security lighting, CCTV, and duress systems already in use," she said.

WACHS would not say whether agency nurses had resigned due to the break-ins saying it was "unable to provide detail relating to individual employment matters".

Wyndham Police Sergeant Simon Womersley said about half a dozen burglary offences had been reported in the town in the past fortnight.

"Four people have been charged so far for a range of offences including burglary, stealing motor vehicles, and graffiti," he said.

"The offenders will be facing court later this month."

Mr McCumstie said living quarters for health workers across the Kimberley needed to be improved to help attract staff.

"They [nurses] have got to feel comfortable that they've got good quality accommodation."