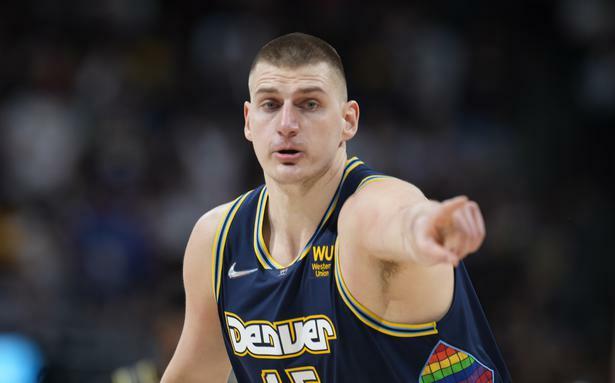 The 27-year-old Serbian star averaged 27.1 points per game with 13.8 rebounds and 7.9 assists this season as the Nuggets finished sixth in the Western Conference.

He beat out Philadelphia 76ers star Joel Embiid and Giannis Antetokounmpo of the Milwaukee Bucks in the final voting, receiving 875 points -- with 65 first-place votes -- from a global panel of 100 sports journalists.

Jokic is the 15th player to win multiple MVP awards.The Nuggets were eliminated in the first round of the playoffs by the Golden State Warriors.

It marked the first time that the top three and four overall of the top five finishers, were international players.Embiid is from Cameroon, Antetokounmpo from Greece and Doncic from Slovenia.

In the televised announcement of the award, broadcaster TNT showed footage of Nuggets coach Michael Malone and some of Jokic's teammates delivering the trophy to him at his horse farm in Serbia.

“Now, I don’t think about (the awards), but probably when I’m old, fat and grumpy, I’m gonna remember, and I’m gonna tell my kids,” he told TNT via video chat.

Jokic joined Antetokounmpo as the second European to win the award more than once.

He said it was a really emotional moment when he was surprised at home with the award.

"Nobody ever came here," he said."I think it's amazing."

His season statistics, which also included 1.47 steals per game and 0.85 blocked shots per game, were career highs in every category except assists.

He ranked sixth in the NBA in points, second in rebounds, eighth in assists, 12th in steals and 33rd in blocks per game.

He led the league in total rebounds (1,019) and total defensive rebounds (813). His career-high 58.3 field goal percentage was eighth-highest in the NBA.

He led the league with 19 triple-doubles.