By Alicia Perera and Samantha Dick 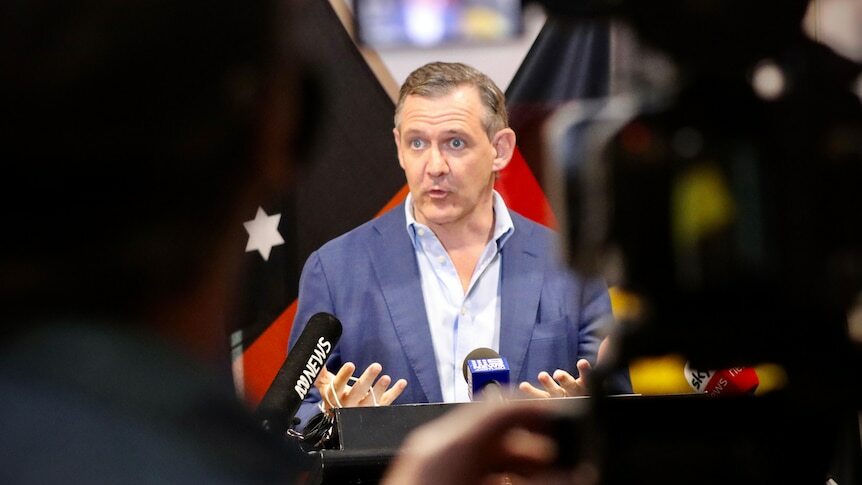 People in the Northern Territory will not be able to enter pubs, clubs and a range of other venues unless they can show proof of vaccination after the Territory government introduced a new COVID-19 vaccine pass system today.

It comes as lockout rules lifted in most parts of the NT at noon, and the Territory reported 403 new cases of COVID-19 in the past 24 hours, including 28 cases of community transmission.

The daily case number is the NT's lowest in three days.

Chief Minister Michael Gunner said 30 of the new cases were interstate arrivals, none were international arrivals, 113 were known close contacts and 230 were still under investigation.

He said 112 of the 403 cases had been identified through rapid antigen tests and would be confirmed through PCR testing.

Mr Gunner also said there were 26 patients with coronavirus in Territory hospitals, including 11 considered acute cases and two in ICU.

One of the ICU patients is in a "critical" condition and on a ventilator, while the other is there for reasons unrelated to COVID.

The NT-wide lockout declared on Thursday has been lifted for everywhere except the remote communities of Yuendumu and Yuelamu, in Central Australia.

It has been replaced by a new vaccine pass system that has come into immediate effect.

Under the new system, people will only be able to enter "high-risk" venues, including pubs, clubs, licensed restaurants and large ticketed events, if they can show proof of vaccination.

"This is serious, and I want you to take this seriously," he said.

He said the NT government could introduce other public health measures in future.

Mr Gunner said 15 COVID-19 cases had been recorded in Yuendumu, where vaccination rates are low, since Friday.

He said that included 10 cases this morning.

The Chief Minister said an extension of the lockout there and in nearby Yuelamu until at least Friday would give authorities time to test as many residents as possible.

"Despite all our efforts over many, many months, Yuendumu continues to be a low-vaccination community and sadly we are not seeing the numbers increase in any meaningful way," he said.

The extended lockout means vaccinated Yuendumu and Yuelamu residents can go about their lives as normal while those who are unvaccinated can only leave home for four reasons: to get medical treatment, for essential goods or services, to provide care or to do one hour's exercise.

Mr Gunner said 15 health staff were already on the ground in Yuendumu, and another team focused on vaccinations was on the way.

Dr Heggie said he had attended meetings with Yuelamu and Yuendumu community members with the aim of boosting vaccination rates.

"We've got now a number of people positive, and that may lead to further transmission and — I'm going to say it — the loss of life," he said.

"And that's important, because our first death in the Northern Territory was an Aboriginal person. So these are the additional controls that we have to put in place."

Some 584 people have been identified as close contacts.

NT Police Acting Commissioner Michael Murphy thanked the public for their generally good compliance with lockout rules over the past few days.

However, he said police had received 48 reports of non-compliance during the lockout.

Fourteen of those prompted investigations, with seven people fined and issued with infringements for breaching Chief Health Officer directions.

Acting Commissioner Murphy called for compliance and understanding as the new vaccine pass system came into effect in the NT.

"As we lead into the next stage of the vaccination pass, it's really important that everyone shows respect [and] some tolerance during times where you'll be questioned to validate your vaccination status," he said.

"So please be respectful, show some tolerance, be patient and just be kind to one another to get through this and protect our community."

Mr Gunner said under the vaccine pass system, the owners of venues requiring proof of vaccination upon entry would need to take "reasonable steps" to ensure patrons were fully vaccinated.

But he also said the "onus is on the individual to do the right thing".

New measures are also set to be introduced in the NT for frontline workers who have been identified as close contacts.

Mr Gunner said a Chief Health Officer direction due to be issued today would allow fully vaccinated workers responsible for performing essential services but classed as close contacts to continue working, provided they were asymptomatic, agreed to take a RAT test every day, wore a mask and isolated when not at work.

He said the direction would apply to people in frontline health, supermarket and childcare roles.

"Managing COVID also means making sure our essential services stay open and stay staffed. It is a vital part of our work," Mr Gunner said.

He said the direction would only apply to essential staff who needed to work to keep their workplace functioning.